The United States said on Wednesday that it was removing Turkey from the F-35 fighter jet programme, a move that had been long threatened and expected after Ankara began accepting delivery of an advanced Russian missile defence system last week. 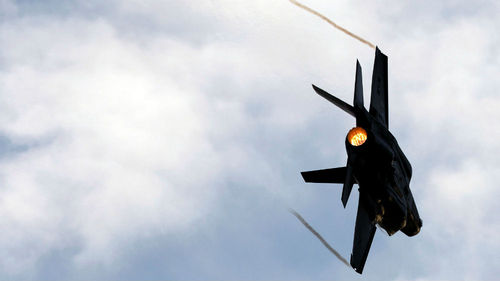 The White House sought to downplay the effects of the decision on the US relationship with Turkey File: Amir Cohen/Reuters

The first parts of the S-400 air defence system were flown to the Murted military airbase northwest of Ankara on Friday, sealing Turkey’s deal with Russia, which Washington had struggled for months to prevent.

Earlier on Wednesday, the White House said in a statement that Turkey’s decision to buy the Russian S-400 air defence system “renders its continued involvement with the F-35 impossible”.

Turkey makes numerous components for the stealth aircraft, which is sold internationally. The US will now have to find alternative suppliers.

“The F-35 cannot coexist with a Russian intelligence collection platform that will be used to learn about its advanced capabilities,” the White House statement said, referring to the S-400 air defence system as a means for Russia to probe US capabilities.

US President Donald Trump announced on Tuesday that the S-400 purchase means Turkey will not be allowed to purchase any F-35 planes. But he also declined to criticise Turkey’s acquisition of the Russian defence system, saying it’s a complex situation” and Ankara was forced into the move by his predecessor Barack Obama.

Yet to be announced is whether the US will impose economic sanctions on Turkey for its decision to buy the S-400 system. Turkish President Recep Tayyip Erdogan has previously said he did not believe Washington would impose sanctions over the issue since the two countries are “strategic allies”.

Trump on Tuesday signaled a reluctance to punish Turkey with major sanctions over its acquisition.

“With all of that being said, we’re working through it. We’ll see what happens, but it’s not really fair,” he added, again appearing to place blame on the Obama administration for failing to sell the US’s best alternative to the Russian S-400s – Patriot missiles.

The break with Turkey over its purchase of a Russian weapon system is symptomatic of a deeper division between Ankara and its Western allies and partners.

Army Secretary Mark Esper, Trump’s nominee to become secretary of defence, told his Senate confirmation hearing on Tuesday he is troubled by Turkey’s decision to defy the US on the S-400, suggesting that it reveals a broader strategic problem.

“It is very disheartening to see how they have drifted over the past several years,” Esper said.

Turkey has said that it was not given favourable terms to buy the American alternative to the Russian S-400 air defence system. The White House, however, said in its statement on Wednesday that Turkey had plenty of chances to buy the US Patriot system.

“This administration has made multiple offers to move Turkey to the front of the line to receive the US Patriot air defence system,” it said.

Turkey initially sought in 2009 to buy the US Patriot missile defence system, and a $7.8bn deal was tentatively approved by the Obama administration.

But Washington baulked when Ankara, seeking to boost its own technology base, insisted on Turkey producing some of the system components itself as part of the deal.

Ankara first turned to China and then to Russia for the system.

This week, Erdogan hailed the first S-400 delivery and said the next step was to jointly produce the system.

“We have begun to receive our S-400s. Some said, ‘they cannot buy them ‘… God willing the final part of this (delivery) will be in April 2020,” Erdogan said.

The ongoing dispute between the countries with the two largest armies in NATO marks a deep division in the Western military alliance, which was forged after World War II to counter Moscow’s military power.

Investors in Turkey have been unsettled by the deal and the prospect of sanctions, a year after a dispute with Washington over the trial of a US pastor in Turkey contributed to a financial crisis that drove Turkey’s economy into recession.

Iran says US sanctions on Khamenei closed path to diplomacy

Why a hipster, vegan, green tech economy is not sustainable