Six humanitarian aid workers are missing after their convoy was ambushed in the state of Borno in northeastern Nigeria. 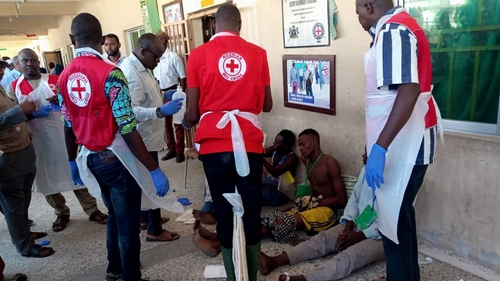 According to the UN, around 7.1 million people still need humanitarian assistance as a result of the violence in the country Audu Ali Marte/AFP

The driver of the vehicle was killed, a statement issued by the Action Against Hunger (AAH), an international humanitarian organisation, said on Friday.

The statement added that the convoy was heading to the border community of Damasak on Thursday when it was ambushed.

“One of the drivers was killed, while one staff member, two drivers and three health workers are missing.” AAH country director Shashwat Sarahe said.

The aid workers were providing life-saving assistance to individuals and families, affected by the humanitarian crisis caused by a decade of Boko Haram violence in the region, he added.

The United Nations humanitarian coordinator in Nigeria, Edward Kallon, said constant insecurity in the region has prevented aid workers from accessing many communities.

“These acts of violence affect the very individuals, families, and communities that we support, and deprive vulnerable people of vital services,” he said.

Around 7.1 million people still need humanitarian assistance as a result of the violence, Kallon added.

Egypt government should be tried over Morsi’s death