A Saudi-UAE-led military coalition fighting Yemen’s Houthi rebels has been blacklisted for a third year by the United Nations over the killing and wounding of hundreds of children, according to a report seen by Al Jazeera. 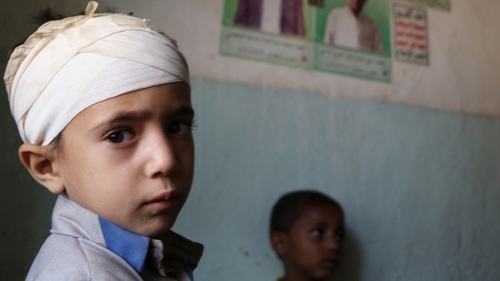 UN report says Saudi-led coalition in Yemen killed or wounded 729 children in 2018, nearly half of all child casualties in the country File: Naif Rahma/Reuters

UN Secretary-General Antonio Guterres said in the annual report submitted to the Security Council on Friday that the coalition killed and wounded 729 Yemeni children in 2018.

The figure accounts for nearly half of the total child casualties in the war-torn and impoverished country.

The toll was “often a result of attacks in densely populated areas and against civilian objects, including schools and hospitals”, Guterres said.

The report also blacklisted the Houthis, saying the rebels killed and wounded 398 children, as well as Yemeni government forces who were responsible for 58 child casualties.

The Children in Armed Conflict report also blamed Israel for the death of 56 Palestinian children and the wounding of 2,674 last year, the highest number in four years. Israel was not blacklisted, however.

The report does not subject those listed to action but rather shames parties to conflicts in the hope of pushing them to implement measures to protect children. The report has long been controversial, with diplomats saying Saudi Arabia and Israel both exerted pressure in recent years in a bid to stay off the list.

In relation to Yemen, the report named the Saudi-UAE-led military coalition and Yemeni government forces on the first list. The Houthis, pro-Yemen government militia, the Security Belt Forces, and al-Qaeda in the Arabian Peninsula on the second list.

The Saudi-UAE led coalition intervened in Yemen in 2015 to restore the internationally recognised government of President Abd-Rabbu Hadi Mansour, who was swept from power by the Houthi rebels the previous year.

“We’re quite disappointed by the inclusion of the Saudi-led coalition in what is known as the ‘not so bad part’ of the list of shame,” Louis Charbonneau, UN director at Human Rights Watch, told Al Jazeera.

There was “simply no evidence” that the Saudi coalition has made any improvement when it comes to protecting the rights of children, he said from New York.

“They have been committing appalling atrocities against children for years now since 2015. To include them year after year as a coalition that is improving makes a mockery of it. Because if they’re improving, why aren’t they getting off the list?”

Saudi UN Ambassador Abdallah Al-Mouallimi told Reuters news agency that the report acknowledged steps taken by the coalition to safeguard children, noting that “every child’s life is precious”. But he also questioned the sourcing and accuracy of the report, describing the numbers as “exaggerated”.

There was no immediate comment by the Israeli UN mission.

Al Jazeera’s diplomatic editor James Bays said the report was seen as a “political hot potato” from countries not wanting to be included on the list.

He added that it was “pretty clear… from reading this report that there’s been political pressure again”.

Separately, the report said Afghanistan and Syria topped the list of countries with the most child casualties accounted for in armed-conflict zones around the world.

“In Afghanistan, the number of child casualties remained the highest such number in the present report (3,062) and children accounted for 28 percent of all civilian casualties,” it said.

Iran to ‘confront any threat’, as Trump warns of ‘obliteration’