Maldives police said they have arrested a former vice president who had sought asylum in India after fleeing the Indian Ocean archipelago to avoid questioning over the embezzlement of state funds. 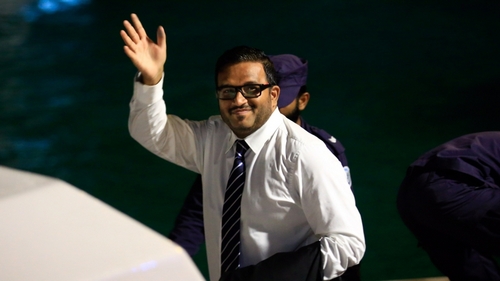 In a Twitter post on Saturday, the police said Ahmed Adeeb “has been arrested” and was being transported to the Maldives’ capital, Male’ “under our custody”.

The move came after India refused entry to the 37-year-old, who faces corruption charges at home.

Adeeb arrived at the Indian port city of Thoothukudi in the Tamil Nadu state on Thursday in a tugboat. He sought asylum after authorities in India refused to let him disembark because he did not possess a valid travel document.

The former vice president and nine members of the Virgo 9 vessel were handed over by the Indian coastguard to Maldivian security at their maritime border in the Indian Ocean on Saturday, according to Indian police sources.

“They were handed over to the authorities early on Saturday,” a top police officer in the port city in Tamil Nadu told AFP news agency, on condition of anonymity.

Adeeb spent three years in jail on charges of money laundering and trying to kill then-President Abdulla Yameen in 2015. He was transferred to home imprisonment in November last year following Yameen’s shock election defeat to an opposition candidate.

In May, an appeals court overturned the sentences against Adeeb and ordered retrials, citing political interference in the convictions. Prosecutors appealed the ruling in the money-laundering case, and the Supreme Court seized Adeeb’s passport pending a new decision.

He was released from house imprisonment in mid-July.

State prosecutors have also named Adeeb as a witness in a money-laundering trial against his former boss, Yameen.

The pair fell out following a mysterious blast on Yameen’s speedboat in September 2015. The then-president escaped the explosion unharmed, but his wife and two aides were injured.

Authorities in the Maldives swiftly moved to arrest Adeeb, and brought him to trial, first on charges of corruption relating to the theft of nearly $80m from state coffers from the lease of islands for tourism in the popular holiday destination, and later on accusations of plotting to kill Yameen.

The following year, he was sentenced to a total of 33 years in jail on corruption and terrorism charges.

FBI officials assisting in the probe said they did not trace any explosives in the boat and Adeeb’s jailing was criticised as being politically motivated.

In a statement on Saturday, Cadman said the new government in the Maldives was using Adeeb “as a political pawn”. The lawyer alleged the authorities forced Adeeb to sign “an agreement by which he would implicate members of the previous administration in criminal conduct and that the provision of necessary medical care was withheld until he signed the agreement”.

Maldivian police said Adeeb should have on Wednesday appeared before investigators in the case relating to the misappropriation of state funds, but failed to show up.

The police said they will take action against anyone who helped Adeeb leave the Maldives.

The economic impact of US sanctions on Iran’s streets