Doha, Qatar – A high-profile meeting featuring Afghan leaders and Taliban representatives has begun in Qatar in a bid to end the 18-year Afghanistan war, even as the peace talks have been overshadowed by an explosion carried out by the armed group, killing at least 14 people.

The two-day intra-Afghan meeting, sponsored by Qatar and Germany and the third of its kind conference this year after two such meetings in Moscow, got under way in Qatar’s capital, Doha, on Sunday.

While about 50 Afghan politicians, activists and journalists were discussing with the Taliban ways to find lasting peace in Afghanistan, the armed group attacked a government security compound in Ghazni city, nearly 150km from capital Kabul.

Taliban fighters detonated a car bomb near the office of Afghanistan’s main intelligence service, the National Directorate of Security (NDS), killing eight security personnel and six civilians, including a child.

Getting reports of a horrific attack in Ghazni in which schoolchildren were again victims. It is unfathomable to endanger children in this way. I strongly condemn this attack. Peace has never been more urgent and is the only path to ending terror and violence.

The powerful blast occurred close to a private school in Ghazni, where dozens of children were attending their classes. At least 60 children were among the 180 people wounded in the attack.

Images of children injured by shards of glass due to the explosion circulated on the social media on Sunday, leading many Afghans to ask if the ongoing peace talks with the Taliban will bear any results. 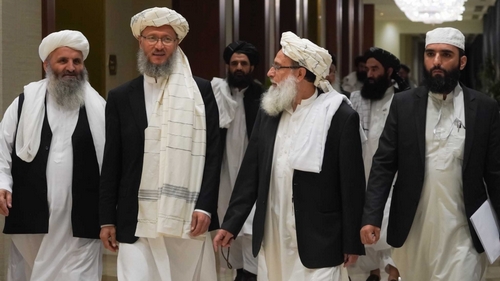 ‘Listening to each other’

Delegates attending the intra-Afghan meeting, however, were hopeful that a dialogue with the Taliban would help in setting the ground for future negotiations.

“The fact that we are all sitting together here is significant, especially when Afghans feel there is no hope,” Sayed Hamid Gailani, head of National Islamic Front of Afghanistan, told Al Jazeera.

Ghairat Baheer, head of the political affairs committee of Afghan political party Hezb-i-Islami, told Al Jazeera that all sides at the meeting listened to each other “with patience and tolerance”.

“Everyone was openly discussing important issues and was giving their opinions,” he said. 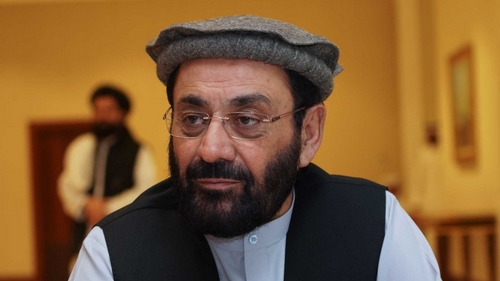 The Taliban, which has repeatedly refused to negotiate with the West-backed government of President Ashraf Ghani, agreed to join the meeting on the condition that the attendees will do so in a personal capacity.

For the first time since the United States started negotiating with the Taliban last year, two Afghan government officials were face-to-face with Taliban representatives at the Doha gathering.

An Afghan official, who did not wish to be named since he was not authorised to speak to media, told Al Jazeera that the two Afghan officials were attending the meeting in a personal capacity – a condition laid out by the Taliban, since it refuses to officially engage with the Afghan government.

The Intra-Afghan Conference for Peace begins in #Doha, in partnership with the Federal Republic of Germany. We welcome different Afghan representatives & look forward to a constructive dialogue that meets the aspirations of Afghan people for peace and stability.

Meanwhile, the seventh round of the US-Taliban peace talks, which began in Doha on June 29, had been paused for two days to allow the intra-Afghan meeting to take place. The talks would resume on Tuesday, officials said.

The US-Taliban talks are aimed at hammering out details of a framework agreement reached in January. The agreement includes a timeline for US troop withdrawal from Afghanistan, a ceasefire, and a Taliban guarantee to not allow foreign groups to use the country as a staging ground for global attacks.

US Peace Envoy Zalmay Khalilzad, who is leading the talks, told Al Jazeera on Saturday that “substantive progress” had been made in the latest round of talks.

The US is not participating in the intra-Afghan meeting, the third such meeting after Afghan politicians and Taliban representatives met twice in Moscow earlier this year.

US special peace envoy for Afghanistan, Zalmay Khalilzad, tells us “substantive progress” has been made in the ongoing negotiations with the Taliban. pic.twitter.com/259hOAMEYd

Despite the diplomatic efforts to end what is now the longest war ever waged by the US, deadly attacks continue in Afghanistan.

Last week, as the US-Taliban talks were under way, the Taliban detonated a powerful car bomb during the morning rush hour traffic in Kabul, killing at least 16 people and wounding 105 others, including 51 children and five women.

The Taliban today is more powerful than it was at any given time since it was toppled in 2001 following the US-led invasion in the wake of the September 11, 2001 attacks.

“I am hopeful that contrary to other occasions, the intra-Afghan meeting with the Taliban will act as a base for the next steps towards peace,” said Gailani.

“What is important now is to come to an agreement with them so that such attacks don’t happen anymore.”