Iran has condemned the “illegal” seizure of an oil tanker by the United Kingdom in Gibraltar and demanded its immediate release. 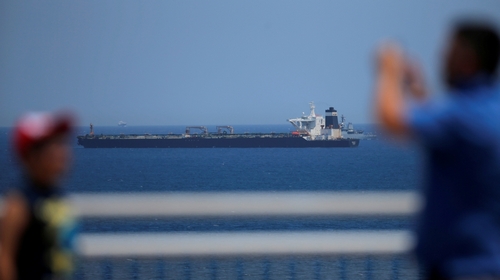 A senior Iranian foreign ministry official “described the UK move as unacceptable” in a meeting with the British ambassador, who had been summoned to hear a formal protest, the ministry said in a statement on Friday.

He “called for the immediate release of the oil tanker, given that it has been seized at the request of the US, based on the information currently available”, the statement added.

Mohsen Rezai, a senior commander in Iran’s elit Revolutionary Guard, also said in a Twitter post that if the vessel was not released immediately, it was Tehran’s “duty” to act alike and seize a British oil tanker.

British Royal Marines, police and customs agents on Thursday stopped and seized the Grace 1 vessel on suspicion it carried Iranian crude oil to Syria in breach of European Union sanctions against the government of Syrian President Bashar al-Assad.

On Friday, the tanker’s crew were being interviewed as witnesses in an effort to establish the nature of the cargo and its ultimate destination, a spokesman for the British territory said.

The spokesman said the 28-member crew, who have remained on board the supertanker, were mainly Indians with some Pakistanis and Ukrainians.

“Excellent news: UK has detained the supertanker Grace I laden with Iranian oil bound for Syria in violation of EU sanctions,” Bolton said on Twitter.

“They don’t recognise the EU sanctions on the Syrian government as legitimate because they have not been endorsed by the United Nations,” she said.

“They say that this act by the British government on behalf of Americans is tantamount to piracy,” Jabbari added.

While Europe has banned oil shipments to Syria since 2011, it had never seized a tanker at sea. Unlike the United States, Europe does not have broad sanctions against Iran.

“This is the first time that the EU has done something so public and so aggressive. I imagine it was also coordinated in some manner with the US given that NATO member forces have been involved,” said Matthew Oresman, a partner with law firm Pillsbury Winthrop Shaw Pittman who advises firms on sanctions.

“This is likely to have been meant as a signal to Syria and Iran – as well as the US – that Europe takes sanctions enforcement seriously and that the EU can also respond to Iranian brinkmanship related to ongoing nuclear negotiations.”

Authorities in Gibraltar said they had reasonable grounds to believe the vessel was carrying its shipment of crude oil to the Banyas Refinery in Syria.

“That refinery is the property of an entity that is subject to European Union sanctions against Syria,” Gibraltar’s Chief Minister Fabian Picardo said.

“With my consent, our port and law enforcement agencies sought the assistance of the Royal Marines in carrying out this operation. We have detained the vessel and its cargo,” Picardo added.

Acting Spanish Foreign Minister Josep Borrell said Gibraltar detained the supertanker after a request by the US.

Spain was looking into the seizure of the ship and how it may affect Spanish sovereignty, as it appears to have happened in Spanish waters, Borrell said. Spain does not recognise the waters around Gibraltar as British.

The ship detention comes at a sensitive time as the EU mulls how to respond to Iran announcing it will go beyond the maximum uranium enrichment level it agreed to in a landmark 2015 nuclear deal.

Tensions between the US and Iran have mounted in the wake of Washington’s unilateral decision last year to abandon the nuclear deal and hit Iran’s crucial oil exports and financial transactions with biting sanctions.

Iran has accused the administration of US President Donald Trump of waging “economic war” against it with a campaign to reduce Iranian oil exports to zero.

In a statement, the UK’s foreign office said “we welcome this firm action by the Gibraltarian authorities, acting to enforce the EU Syria Sanctions regime”.

Refinitiv Eikon mapping indicates the ship sailed from Iran, and if the cargo is confirmed to be Iranian crude, its attempted delivery to Syria could also be a violation of US sanctions on Iranian oil exports.

The mapping data shows the ship sailed a longer route around the southern tip of Africa instead of via Egypt’s Suez Canal.

According to Lloyds List, which analysed vessel-tracking data, the 1997-built ship is the first tanker laden with Iranian oil to head for Europe since late 2018.

Iranian crude exports were around 300,000 barrels per day or less in late June, industry sources said, a fraction of the more than 2.5 million bpd Iran shipped in April 2018, the month before Trump withdrew from the nuclear deal.

The EU has imposed sanctions on 277 Syrian officials including government ministers over their role in the “violent repression” of civilians as the war broke out in March 2011.

It has frozen the assets of some 72 entities and introduced an embargo on Syrian oil, investment restrictions and a freeze on Syrian central bank assets within the EU.

Why the UN failed to save the Rohingya