Iran hit back at US President Donald Trump’s call for new nuclear negotiations that encompass its ballistic missiles programme, accusing Washington of bringing the Middle East to the brink of “explosion” by selling arms to allies in the Gulf. 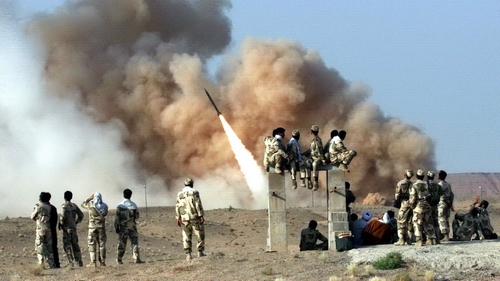 Iran will only sit down with the United States if it lifts punishing economic sanctions, foreign minister says EPA

Mohammad Javad Zarif, Iran’s foreign minister, made the comments in a wide-ranging interview that aired on NBC News on Monday.

He said Iran would only sit down with the United States if it lifted punishing economic sanctions it has imposed on Tehran and rejoined the 2015 nuclear deal it abandoned last year.

Trump pulled the US out of the landmark multilateral accord saying he wanted to negotiate a new deal that also addressed Iran’s ballistic missiles programme and support for armed groups in the region.

Zarif, who is in New York City on a visit to the United Nations, told NBC it was the US and its allies – Saudia Arabia and the United Arab Emirates – who were to blame for turmoil in the Middle East.

“If you want to discuss ballistic missiles, then we need to discuss the amount of weapons sold to our region,” he said.

“These are American weaponry that is going into our region, making our region ready to explode. So if they want to talk about our missiles, they need first to stop selling all these weapons including missiles to our region.”

When NBC journalist Lester Holt further pressed Zarif on the issue, referring to Iran’s support for armed groups in the region, the minister brought up the Saudi-led interventions in Yemen and Bahrain.

“Let me ask you – who’s bombing Yemen? Who’s invading Bahrain? Who kept the prime minister of another country a prisoner,” Zarif asked.

“Are we involved at all in North Africa?… Why do you have chaos in Libya? Is Iran involved in Libya?… in Sudan?… in Algeria? Why do we have all this turmoil? I believe if you want to look at the right place for those who have malign activity in our region, the US needs to look at its own allies, not at Iran.”

Zarif, who has been hit by tight travel restrictions while in New York, reiterated Iran did not want a war with US and urged Trump to lift the crippling measures against Tehran to begin talks.

“Once those sanctions are lifted, then… the door for negotiations is wide open,” Zarif said. “It is the United States that left the bargaining table. And they’re always welcome to return.”

In the year since the US exited the nuclear deal – a move opposed by the pact’s remaining signatories – Washington has tightened sanctions on Iran, including on its oil and banking sectors.

In May, Washington also sent warships, bombers and thousands of additional troops to the Gulf, citing unspecified threats from Iran. Tensions have since soared, with the US calling off air raids against Iran at the last minute after Tehran downed a US spy plane that it said encroached on its airspace in June, a claim Washington denies.

When asked if Trump’s decision to halt air raids amounted to a diplomatic overture, Zarif said: “It’s not an overture if you decide not to commit another act of aggression against a country that is capable of defending itself.”

Vowing to continue resisting “aggression”, Zarif said Iranians will “find a way to circumvent the pressure through relying on their own resources, on their own capabilities, and on their own talent”.

The Islamic Republic, which has been under a variety of sanctions since its founding in 1979, invested in its ballistic missiles and nuclear programmes because of those sanctions, he added. But he warned: “Of course when there is tension, there is tension for everybody. Nobody is immune in a tense environment.”

The new US sanctions have plunged the Iranian economy into crisis, and caused a shortage in critical medicines, Zarif said, a move he said has put Iranian people under “huge humanitarian pressure”.

“They are terrorising our people. They are targeting ordinary Iranian civilians. That’s worse than war,” he added.

How an incident displaced 600 refugees