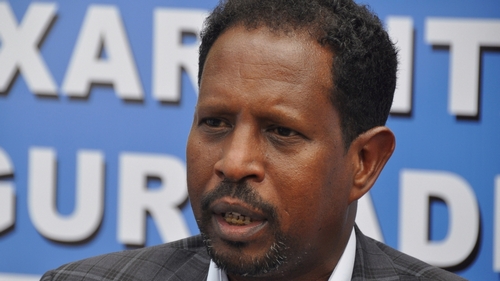 Mayor for Mogadishu Abdirahman Omar Osman is receiving treatment for the injuries sustained in the blast, according to officials FILE – Feisal Omar/Reuters

At least six people have been killed and the mayor of Mogadishu wounded in a suicide attack inside his office during a security meeting, officials said.

“The mayor was wounded in the blast and he is currently being treated,” Mohamed Abdullahi Tulah, deputy mayor, told state-owned Radio Mogadisho.

“Six people, including two district commissioners and three directors, were killed in the terrorist attack this afternoon,” Mohamed told reporters in Mogadishu.

“Six others have been wounded among them the mayor of Mogadishu and other district commissioners who are now being treated by the medical team.” He added.

Earlier United Nations special envoy James Swan had met with the mayor, Abdirahman Omar Osman, at the headquarters of the Banadir district, which encompasses Mogadishu, according to the mission’s Twitter account.

However UN sources told AFP news agency he had left by the time of the explosion.

“The blast was very heavy, and I saw people, fleeing some with shrapnel wounds outside the Banadir administration headquarters,” Mohamud Shariif, a wtiness, told AFP.

It is not clear how the bomber managed to enter the mayor’s office or what officials were attending the security meeting.