Hong Kong – Mayhem erupted in Hong Kong on Sunday as riot police fired multiple rounds of tear gas and rubber-coated bullets to disperse thousands of protesters who defied orders by occupying major roads and vandalising Beijing’s liaison office, and suspected gangsters attacked rally-goers at a station in an outlying district of the city.

The demonstration began peacefully as tens of thousands of anti-government protesters poured onto the streets to renew calls for an independent inquiry into police brutality, alongside other pro-democracy demands.

Clad in their usual black, the demonstrators began gathering at 3pm (07:00 GMT) in Victoria Park on Hong Kong Island for a march towards Wan Chai, a busy commercial area.

But thousands carried on further west beyond the endpoint to Central and Sheung Wan, gathering outside Beijing’s liaison office, where protesters threw eggs and defaced the national Chinese emblem outside the building.

The organiser of the march, the Civil Human Rights Front, said 430,000 people participated, while police put the figure at 138,000.

In the more rural northwest of the territory, meanwhile, men dressed in white t-shirts and wielding sticks stormed into the Yuen Long station, attacking passengers.

The opposition Democratic Party said on Monday it would investigate the attacks, which it blamed on suspected members of triad organised crime groups, according to Reuters.

Democratic Party lawmaker Lam Cheuk-ting, who was injured in the violence, criticised the police for their failure to intervene.

“Is Hong Kong now allowing triads to do what they want, beating up people on the street with weapons?” he said.

Hong Kong police said they had moved to clear the occupied Sheung Wan area because the Central Police Station “was under attack” and began using tear gas after protesters continued to throw “bricks and petrol bombs” at officers despite warnings.

While the Police’s cordon line was sweeping eastward through Sheung Wan, some protestors threw such objects as bricks and petrol bombs at the Police. Despite repeated warnings by the Police, the violence did not abate. Therefore, the Police used tear gas at around 10 PM.

In defiance of police orders, protesters occupied streets outside government headquarters and proceeded on to the top court. Scores wearing masks and carrying umbrellas pushed on further west to Beijing’s liaison office.

“In this march, we specifically prioritise our demand of having an independent inquiry. Police abuse of power has not only continued, but escalated,” Bonnie Leung, vice convener of the Civil Human Rights Front, told Al Jazeera.

“Society really needs to move on, which only can be achieved by having an independent inquiry with a trustworthy judge. Only with a thorough report can all the clashes be investigated and reported.” 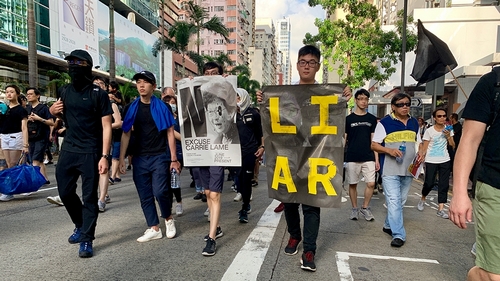 As riot police advanced on crowds surrounding Beijing’s liaison office, protesters prepared for a standoff, setting up barricades and supply stations on nearby roadways.

In an editorial published on Monday, state news agency XInhua condemned the attack on China’s office in the territory and said such a “blatant challenge” on the central government would not be tolerated.

“When the majestic national emblem of the People’s Republic of China was defaced with black paint, it caused unbearable pain and anger,” Xinhua said. “These illegal acts are unacceptable to all Chinese people, including the people of Hong Kong.”

Protests have rocked the Chinese territory since the proposal in early June of a controversial extradition bill that would have allowed suspected criminals to be extradited to mainland China. While Chief Executive Carrie Lam earlier this month pronounced the bill “dead”, the embattled leader did not officially retract it.

The outcry over the bill has since transformed into larger concerns over increasing Chinese interference into the financial hub, which has been a semiautonomous region since the former British colony was returned to China in 1997.

In early July, protesters stormed and ransacked Hong Kong’s Legislative Council as the crisis came to a head. 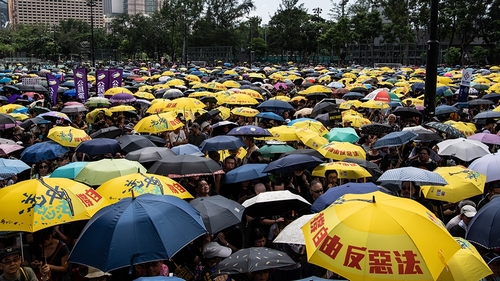 Since the police rejected the protesters’ appeal for Sunday’s rally to finish at the Court of Final Appeal in Central, Leung said a small team of fewer than 30 people would march on to meet their goal.

“We want to reach and see that justice,” Leung said.

“We Hong Kong people have always believed in the courts, which are still independent. Rule of law is very important to Hong Kong.”

Hong Kong inherited a framework known as “one country, two systems” that guarantees the protection of civil liberties and the rule of law, but which protesters say has come under threat in recent years.

Alongside an independent police inquiry, demonstrators on Sunday reiterated their five ongoing demands, including removing the “riot” label for the June 12 protests, the release of arrested demonstrators, and to directly elect their officials.

“It’s been almost two months since our biggest demonstrations, but the government still hasn’t answered our requests,” Marshall, a 30-year-old protester, told Al Jazeera. “We are not going to stop until we reach our goals.”

“Instead of hiding behind the police force, it is a must for Carrie Lam to terminate the bill and give back Hong Kong people the right to vote in the chief executive election.”

Last weekend, protests that erupted in towns closer to Hong Kong’s border with the mainland resulted in more than 40 arrests and nearly two dozen injuries, according to the Hong Kong Free Press. 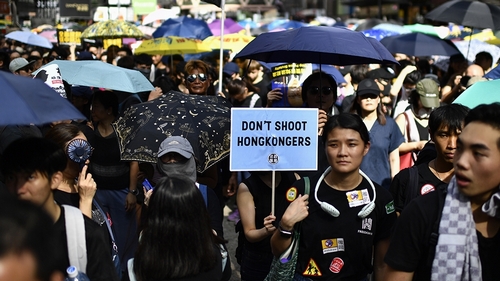 On Saturday, police arrested three men connected to what they say was the “largest seizure of explosives” from a warehouse where a bomb squad was deployed, the South China Morning Post reported.

The pro-independence Hong Kong National Front confirmed in their Telegram group one of the arrested men was a member of the group, but said it was unaware of the explosives.

It said the warehouse was understood to be used only to store audio equipment and promotional material.

The march also follows a Saturday pro-Beijing march, where thousands of people gathered for a “Safeguard Hong Kong” rally in favour of the police and an end to violence.

Trump wants Pakistan to help ‘extricate’ US from Afghanistan