Iran considers Britain’s seizure of an Iranian oil tanker a breach of the 2015 nuclear deal, a senior official said on Sunday, as remaining signatories to the ailing accord met in the Austrian capital for emergency talks. 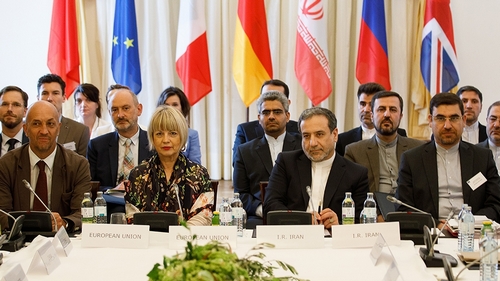 Britain, France, Germany, Russia, China and Iran have been trying to salvage the landmark pact since the United States withdrew from it in May 2018 and re-imposed sanctions on Tehran, crippling an already weak economy.

Iran-Europe ties are under strain, however, after British authorities detained an Iranian oil tanker carrying two million barrels of crude off the coast of Gibraltar earlier in July. They cited alleged violations of European Union sanctions against Syria for the move.

Days later, Iranian forces impounded a British-flagged ship in the Strait of Hormuz.

Arriving at the meeting in Vienna on Sunday, Iran’s Deputy Foreign Minister Abbas Araghchi linked the tanker row to discussions over the nuclear deal, formally known as the Joint Comprehensive Plan of Action (JCPOA).

“Developments have occurred, such as the seizure of the tanker carrying Iranian oil in Gibraltar, which in our view is considered a breach of the JCPOA,” Araghchi said in comments carried on Iranian state TV.

“Countries party to the JCPOA must not create any obstacles in the way of Iran exporting its oil,” he added.

Araghchi told reporters after Sunday’s meeting ended “the atmosphere was constructive, and the discussions were good”.

He added: “I cannot say that we resolved everything” but all the parties were still “determined to save this deal”.

The head of the Chinese delegation also said every nation represented wanted to keep the accord alive, and strongly opposed Washington’s decision to unilaterally re-impose sanctions on Tehran.

“All sides have expressed their commitment to safeguard the JCPOA and to continue to implement the JCPOA in a balanced manner,” said Fu Cong, director general of the Department of Arms Control at China’s foreign ministry.

“All sides have expressed their strong opposition against the US unilateral imposition of sanctions,” he added.

Both diplomats said there was a general agreement to organise a higher-level meeting of foreign ministers soon, but also that preparations for such a summit needed to be done well. No date has been set.

The agreement, which offered Iran relief from global sanctions in exchange for curbs on its nuclear programme, is in danger of unravelling following Washington’s tough sanctions on Tehran’s oil and banking sectors.

The EU’s foreign policy service said envoys from Britain, France, Germany, China, Russia will “examine issues linked to the implementation of the JCPOA in all its aspects” at Sunday’s extraordinary meeting.

In May, Iran said it would disregard certain limits the deal set on its nuclear programme. After surpassing a cap on stockpiles of enriched uranium, Iran’s atomic agency earlier this month said it has also started to enrich uranium to a higher grade than the 3.67 percent set in the JCPOA.

Iranian officials say all of the moves were “reversible within hours” if the remaining signatories upheld their commitments.

However, they have also threatened to take further measures if the parties, especially European nations, did not help Tehran circumvent the US sanctions, particularly the restrictions on its ability to export oil.

France, Britian and Germany have set up a special trade channel, known as INSTEX, to help EU members trade with Iran. But Iranian officials say the mechanism does not meet Iran’s needs as it does not facilitate oil exports.

Separately, Iran’s President Hassan Rouhani denounced on Sunday a British plan for a European-led naval mission to ensure safe shipping through the Strait of Hormuz, one of the most vital waterways for the world’s oil.

“The presence of foreign forces will not only not help the security of the region, but will be the main factor for tension,” Rouhani told Oman’s Foreign Minister Yusuf bin Alawi during a meeting in Tehran.

Iran and Oman had primary responsibility for securing the Strait of Hormuz, he said, adding: “The roots of the unpleasant events and tension in the region today are the unilateral withdrawal of US from the 2015 nuclear deal.

Oman, which maintains warm ties with both Iran and the US and has previously been a go-between for the two countries that severed diplomatic relations after the 1979 Iranian revolution.

“I hope that your familiarity with the issues of the relations of Iran and England and your presence once in Tehran will be a considerable help to get rid of existing obstacles in the growth and expansion of relations between us,” he said in the statement.

The US and Iran came to the brink of a major military confrontation in June after Iranian forces shot down an unmanned US drone. Trump said he called off retaliatory air raids at the last moment because the resulting death toll would have been too high.

Weeks later, on July 18, Trump said a US warship “destroyed” an Iranian drone in the Strait of Hormuz, a claim Tehran has dismissed.

The US and Saudi Arabia have also blamed Iran for multiple suspected attacks on tankers in the Gulf, which Tehran denies.