Kabul, Afghanistan – For years, the Kabul landscape has been undergoing increasing transformation.

New high-rise apartment buildings, where rents can top out at $1,000 a month, restaurants and wedding halls jostle for space as efforts to make the city more green result in more trees and flowers on pavements and traffic dividers.

But the biggest change is still taking hold, one that harks back to the city’s peaceful past. Scores of Afghans are busily restoring the iconic Darul Aman Palace.

Over the last 40 years of conflict, the building went from a symbol of modern Afghanistan that King Amanullah Khan wanted to create when he ordered its construction in the 1920s, to a physical embodiment of the ravages of war.

For decades, the once magnificent neoclassical structure laid in ruins.

Riddled with bullet holes and covered in English, Dari and Pashto language tags and intricate graffiti designs of turbaned men and dogs, people began referring to the European-style palace as a “dirty sieve”. 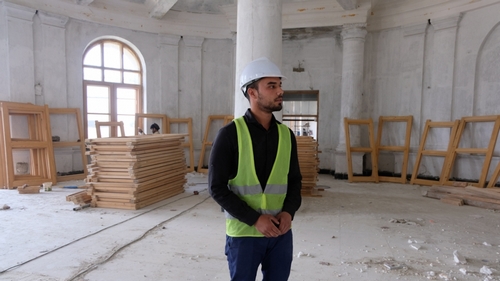 What was once seen as an architectural triumph had become a phantom evoking memories of the Soviet occupation of the 1980s, the civil war of the 1990s and Washington’s 18 years, and counting, incursion in the country.

In 2016, President Ashraf Ghani, said to be a longtime admirer of Amanullah, who once referred to Darul Aman as the “palace of abandoned dreams”, officially ordered its reconstruction. Addressing media from inside the building, where entire sections of the roof were held up by steel nets, Ghani said the restoration was a “return to the past to begin laying the foundation for the future”.

From the moment the project was first reported, the news was met with stark and conflicted reactions.

While many were pleasedto see the president banish a “ghost” that haunted the city’s skyline, others feared that the reconstruction would cover up a much-needed reminder of the costs of a decades-long series of wars. 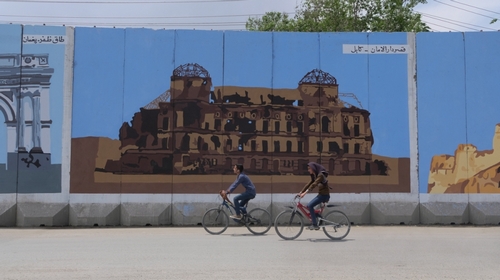 For the 1,000 people who have been employed by the project so far, including 27 female engineers in a team of 105 – the restoration is both a boon to a struggling economy and a chance to transform the layout of the capital.

At 23, engineer Abdul Wahid, a site manager, is too young to remember the palace before the wars led its stairways to crumble and the roof to fall to pieces. Still, he feels the project was long overdue.

Addressing concerns that the reconstructed building will mask the realities of war, Wahid said: “We’ve lived our whole lives with bombs and fighting, we know nothing good comes from war.” 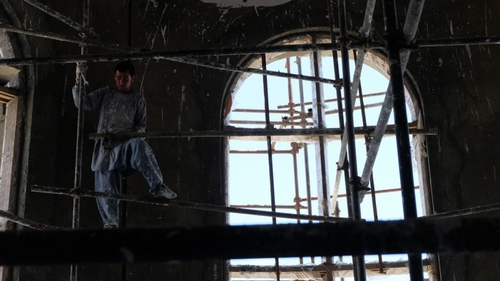 The labour force comprises Afghans from nearly every region of the country, including areas where the war is most intense.

The materials – marble from Herat province, wood from Kunar province – are all Afghan products.

Wahid said the restored building will be a monument to Afghan endurance and creativity.

Rather than covering up past wars, “this site will serve as a constant, physical reminder of the difference between war and peace,” said Wahid.

For the hundreds of workers on the site, the reconstruction is not only a point of pride, but also a much-needed economic opportunity at a time when the Kabul government has been unable to address the 40 percent unemployment rate and the precipitous fall in the value of the Afghani.

Gholam Ali travelled along one of the nation’s most dangerous roads to arrive in Kabul from his native Maidan Wardak province.

“We need to rebuild,” he said, referring to both Kabul and the personal financial needs of the workers in the background hammering, painting and soldering while they fast during the month of Ramadan.

“Everyone in this country knows what war brings, no one needs a building to remind them of that. It’s all around. Instead, let people have a beautiful, green space to bring our families,” he told Al Jazeera. 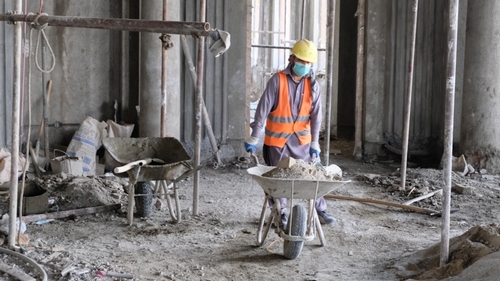 Upon completion, the building will host a museum containing artefacts from the Presidential Palace’s archive, which goes back to the time of Amanullah’s father, King Habibullah, and a fully-landscaped park.

But not everyone is in favour of the restoration project.

Nilofar Ibrahimi, an MP from the northern province, has lived in Kabul since she was six.

She says there are entire generations of Afghans who did not live through the conflicts to know how and why the palace was destroyed in the first place.

“When they drive through the streets of Kabul,” she said, using her own children, who are currently in Australia, as an example, “I want them to be able to see that there was a war here, and that it was war that destroyed our city.”

Most importantly, Ibrahimi wants everyone to know that the “destruction came from outsiders and ourselves.”

Her statement is a reference to the fact that the palace was used by invading armies during the Soviet and US wars and by Afghan commanders during the civil war of the 1990s. 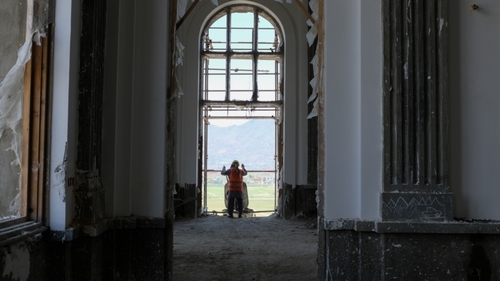 Still, others want the site to be remembered by future generations as a site of Afghan triumph.

Qorban, from the central province of Daikondi, has been working on the restoration for more than a month.

To him, the completed palace will be a testament to the Afghan people and nation, who have survived so many different conflicts. 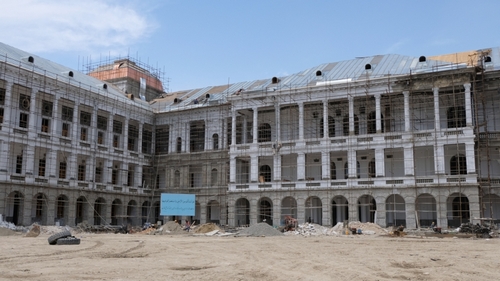 “It’s putting Afghans to work. The entire labour force here is all Afghan and we’re using all Afghan materials, why wouldn’t this be a good thing for the Afghan nation?”