The ruling Transitional Military Council (TMC) and the civilian leaders also agreed to launch a “transparent and independent investigation” into the violence that began on June 3 when scores of pro-democracy demonstrators were killed in a brutal military crackdown on a protest camp in the capital, Khartoum.

Sudan’s ruling generals and a coalition of protest and opposition groups have reached an agreement to share power during a transition period until elections, in a deal that could break weeks of political deadlock since the overthrowing of autocratic President Omar al-Bashir in April.

Both sides agreed to establish a joint military-civilian sovereign council that will rule the country by rotation “for a period of three years or slightly more”, Mohamed Hassan Lebatt, African Union (AU) mediator, said at a news conference on Friday.

Under the agreement, five seats would go to the military and five to civilians, with an additional seat given to a civilian agreed upon by both sides

TMC deputy head General Mohamed Hamdan Dagalo, who is widely known as Hemeti, welcomed Friday’s deal, which, he said, would be inclusive.

“We would like to reassure all political forces, armed movements and all those who participated in the change from young men and women … that this agreement will be comprehensive and will not exclude anyone,” added Dagalo, who also heads the feared paramilitary unit Rapid Support Forces (RSF) accused by the demonstrators of crushing the sit-in outside the military headquarters.

Omar al-Degair, a leader of the Forces for Freedom and Change (FFC), an umbrella organisation of opposition groups, said the agreement “opens the way for the formation of the institutions of the transitional authority, and we hope that this is the beginning of a new era”.

In a statement on Friday morning, the Sudanese Professionals Association (SPA), which is part of the FFC, said the transition period would last three years and three months.

“Today, our revolution has won and our victory shines,” the SPA said in the statement, which was posted on its Facebook page. 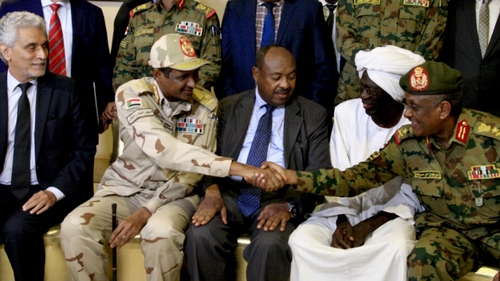 The military would lead the sovereign council for the first 21 months, and a civilian would take over for the remaining 18 months, it said. The FFC would appoint a cabinet of ministers, the SPA said, adding that a legislative council would be formed after the appointment of the sovereign council and the cabinet.

The two sides also agreed to set up a committee of lawyers, including jurists from the AU, to finalise the agreement within 48 hours.

Khaled Omar, a protest leader, told reporters in Khartoum later on Friday that the deal was only “a first step”.

“Power transfer to a civilian transitional authority… means that the revolution has put its feet on track to achieve its principal goals,” Omar said. He added that the FFC does not seek revenge but wants “to achieve a comprehensive national reconciliation”.

The deal came after two days of talks following the collapse of the previous round of negotiations in the wake of the crackdown on the protest camp. Opposition medics say more than 100 people were killed in the dispersal and subsequent violence on June 3. Officials put the death toll at 62.

The TMC and the opposition coalition have been wrangling for weeks over what form Sudan’s transitional government should take after the military deposed al-Bashir on April 11 after months of mass protests against his 30-year rule.

Protesters had remained in the streets following al-Bashir’s toppling, fearing the generals intended to cling to power or preserve some form of authoritarian rule.

The AU and neighbouring Ethiopia stepped up mediation efforts to end the crisis and negotiations resumed earlier this week, following massive protests last weekend in which tens of thousands of demonstrators filled the streets of Sudan’s main cities in the biggest show of numbers since the June 3 crackdown. 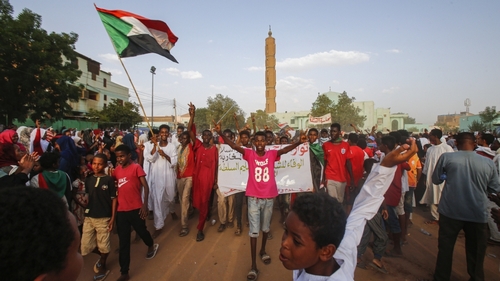 In Khartoum, thousands of people took to the streets to celebrate the breakthrough. But many called for continued protests and pressure on the military to implement its side of the deal.

“We would like to see many more guarantees from the TMC because they’ve made many promises on handing over power only to backtrack later on,” said Mohamed Ismail, a 34-year-old engineer who was part of a crowd in Khartoum’s al-Sahafa area.

Ashraf Mohamed Ali, another protester, called the agreement a “good move for Sudan”.

“It is important to see the implementation of the deal on the ground because the TMC’s actions over the past month proves this council is not serious about giving up power to civilians,” he told Al Jazeera via telephone.

“And so to have an agreement is in itself a good thing. I am happy but we want to see the deal being implemented.”

Welcoming the two sides’ decision to launch an investigation into the June 3 killings, Ali said “any deal that doesn’t include a real investigation isn’t going to be satisfying for the majority of the civilians.”

The protesters were not happy about the possibility of Hemeti “being part of a new government”, Ali said, referring to the RSF’s role in dispersing the Khartoum protest camp.

“But this is the reality,” he said. “The RSF control everything in Sudan. So if you want to make a deal or if you want to have a civilian government, you need to know how to deal with them, in a way that could serve your agenda and without dragging the country into war.”

The United Arab Emirates, which backs the TMC, congratulated the two sides on the power-sharing deal.

“We hope that the next phase will witness the foundation of a constitutional system that will strengthen the role of institutions with broad national and popular support,” UAE’s Minister of State for Foreign Affairs Anwar Gargash said in a post on Twitter.

Abu Dhabi will stand with Khartoum in “good times and bad times”, he added.

UN Secretary-General Antonio Guterres also hailed the pact and urged all sides to “ensure the timely, inclusive, and transparent implementation of the agreement and resolve any outstanding issues through dialogue”.

Farhan Haq, Guterres’ deputy spokesman, said in a statement that the secretary-general also welcomed “the parties’ commitment to conducting an independent investigation into the violence perpetrated against peaceful protesters, including the events on 3 June”.