British Foreign Secretary Jeremy Hunt has moved to ease tensions with Tehran, saying the Iranian oil tanker being held by authorities in Gibraltar would be released if there was a guarantee it was not heading to Syria. 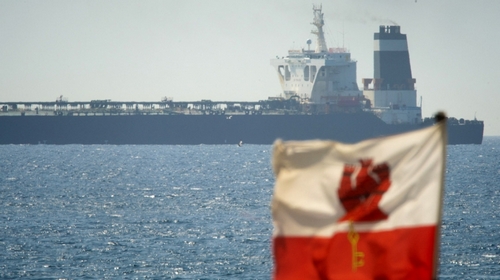 The Grace 1 oil tanker was seized earlier this month by British Royal Marines off the coast of the British Mediterranean territory on suspicion of violating European Union sanctions on Syrian President Bashar al-Assad’s government.

Iran has since demanded the ship be released and denied it was taking oil to Syria.

In a series of Twitter posts on Saturday, Hunt said he had a “constructive call” with his Iranian counterpart, Mohammad Javad Zarif, over the issue.

“I reassured him Zarif our concern was destination not origin of the oil on Grace One & that UK would facilitate release if we received guarantees that it would not be going to Syria, following due process in Gib courts,” Hunt tweeted.

“Was told by FM Zarif that Iran wants to resolve issue and is not seeking to escalate,” he added.

Al Jazeera’s Rory Challands, reporting from London, said that after days of rising tensions between Tehran and London – which saw Britain deploy a second warship to the Gulf and Iranian gunboats allegedly threaten a UK supertanker in the oil-rich region – there was now “at the very least, some diplomacy going on”.

Tehran blamed the United States for arranging the seizure of the tanker.

Since pulling out of a landmark 2015 nuclear deal brokered between Iran and several other world powers last year, Washington has imposed punishing sanctions against Tehran and moved to cut its oil exports to zero.

European countries do not have sanctions against Iran, but have had them in place against Syria since 2011.

Gibraltar’s Chief Minister Fabian Picardo told the territory’s parliament on Friday that the decision to detain the tanker, which he said was carrying 2.1 million barrels of oil, was not taken at the request of any other country.

Gibraltar police said four crew members that had been arrested, including the vessel’s captain and chief officer, had been released on bail without charge but their investigation was ongoing.

Hunt also said he raised with Zarif the imprisonment of British-Iranian national Nazanin Zaghari-Ratcliffe, and Zarif “said he would continue to seek to find a solution” over her case.

Zaghari-Ratcliffe is a dual British-Iranian national serving a five-year sentence in Iran for alleged espionage. Iran does not recognise dual nationality.

A 41-year-old Thomson Reuters Foundation employee, she was jailed in July 2016, three months after her initial arrest at Tehran airport as she was heading back to Britain.

She has frequently denied the sedition charge levelled against her, insisting she was in the country on a family visit with her daughter.