A Pakistani military plane on a training flight has crashed into homes near the garrison city of Rawalpindi, killing at least 17 people, most of them on the ground. 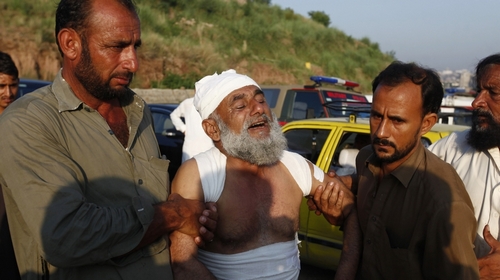 Fires, damaged homes and debris were visible in Mora Kalu village on the outskirts of Rawalpindi following the incident before dawn on Tuesday.

Troops and police cordoned off the residential area to search for plane debris and investigative evidence after the rescue efforts had ended.

Five soldiers, including two army pilots, and at least 12 civilians were killed, the military said in a statement.

Farooq Butt, an official at the state-run emergency service, said an additional 15 people were injured.

Rescue officials said the death toll could rise since some of those injured were critical.

“We have shifted all the bodies and injured persons to hospitals,” he told the Associated Press news agency. “Most of the victims received burn injuries and children are among the dead.”

Residents said they woke up when they heard an explosion and saw debris of a burning plane near their homes. Army helicopters were seen hovering over the crash site later.

“I woke to the sound of a huge explosion. I stepped out of my house and saw huge flames and we rushed to the site,” said Mohammad Sadiq told AFP.

“People were screaming. We tried to help them but the flames were too high and the fire too intense, so we could not do anything. The dead includes seven members of one family and most of them were burned to death.”

Mohammad Mustafa, another resident, said his sister’s home was hit in the crash.

“My sister, her husband and their three children were killed when the plane crashed into their home,” he told AP as he sobbed near his sister’s badly damaged home. He said rescuers and troops quickly reached the area after the crash.

Abdul Rehman, a medical doctor, said at least three homes were badly damaged and the pilots’ bodies had been retrieved.

The military said the army aircraft was on a routine training flight when it crashed, but had no information on the possible cause.

Pakistan’s military has been on maximum alert since February when India launched an air attack inside Pakistan, saying it was going after fighters who were responsible for the suicide bombing that killed 40 Indian troops in Indian-administered Kashmir.

Pakistan at the time retaliated and shot down two Indian air force planes. One Indian pilot was captured and later released amid signs of easing tensions.

Pakistan has a chequered aviation safety record, with frequent plane and helicopter crashes over the years.

In 2016, a Pakistan International Airlines plane burst into flames after one of its two turboprop engines failed while travelling from remote northern Pakistan to Islamabad, killing more than 40 people.

The deadliest air disaster on Pakistani soil was in 2010, when an Airbus 321 operated by private airline Airblue and flying from Karachi crashed into the hills outside Islamabad while coming in to land, killing all 152 on board.

UK: Seized Iranian tanker could be released after ‘guarantees’