Direct talks between the Taliban and an Afghan negotiating team that will include top government officials will take place after the United States concludes its own “agreements” with the group, according to the US special envoy for Afghanistan. 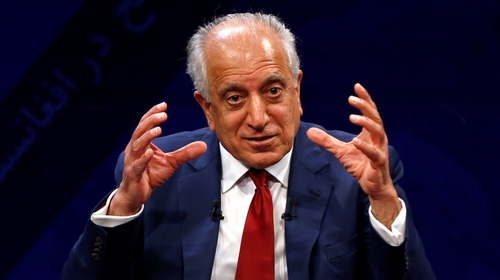 The Taliban has been holding peace talks with the US for nearly a year File: Omar Sobhani/Reuters

The comments by Zalmay Khalilzad on Sunday came after Abdul Salam Rahimi, Afghanistan’s state minister for peace affairs, said that a 15-member government delegation would meet the Taliban within the next fortnight in Europe, without elaborating.

“We are preparing for direct talks. We are working with all sides and hope that in the next two weeks the first meeting will take place in a European country,” Rahimi said in a video message published on Saturday.

Khalilzad, who is currently visiting Afghanistan’s capital, Kabul, said later on Twitter that the “intra-Afghan” talks would include the Taliban and “an inclusive and effective national negotiating team consisting of senior government officials, key political party representatives, civil society and women”.

….they will take place between the Taliban and an inclusive and effective national negotiating team consisting of senior government officials, key political party representatives, civil society and women. (2/2)

Zabihullah Mujahid, Taliban spokesman, confirmed Khalilzad’s comments, telling AFP news agency any new talks would only begin after a deal had been forged with the US, and he reiterated the armed group’s long-held position that they would “not talk to the Kabul administration as a government”.

The Taliban has been holding peace talks with the US for nearly a year, but refused to meet with the government, viewing it as a US puppet.

The eighth round of US-Taliban talks will take place next week in Qatar’s capital, Doha, aiming to end the near 18-year military involvement of the US in Afghanistan.

Washington has said it wants to see a deal inked by September 1, but any deal requires the Taliban to talk to Kabul.

‘Now is the time’

Diplomatic sources told AFP the talks were scheduled to begin in Norway’s capital Oslo on August 7.

The sources also said the international community and the Afghan government were still awaiting word from the Taliban.

Afghan President Ashraf Ghani and US Secretary of State Mike Pompeo agreed in a telephone conversation on Wednesday that “now is the time to accelerate efforts to reach a negotiated end to the war in Afghanistan”, according to a joint statement.

Meanwhile, the war continues to flare across Afghanistan, with the Taliban, the US and Afghan forces all fighting at an increased tempo.

At least three police officers were killed and a dozen more were wounded on Saturday when a Taliban suicide bomber drove an explosives-packed, US-made armoured vehicle into a compound in eastern Afghanistan, officials said.

On Thursday, three blasts rocked Kabul, killing at least 10 people and wounding scores more, even as US and Afghan officials pledged to speed up their efforts to reach a negotiated settlement.

Ethiopia steps up arrests as shockwaves from coup bid continue

Panic in Kashmir after India asks tourists and pilgrims to leave