Nazim Sirraj, who is among those demanding a transition to civilian rule in Sudan, told the AP news agency that the three were found next to a school in Omdurman, the twin city of the capital Khartoum.

Three bodies with bullet wounds were found in Sudan’s Omdurman city, leading Sudanese activists said on Monday, bringing the total death toll from Sunday’s anti-military protests to at least 10 across the country.

The identities of the three dead were not immediately clear.

Crowds of people gathered around the bodies, chanting “Just Fall, Just Fall”, a common slogan of the protest movement that has rocked Sudan since demonstrations first erupted against since-overthrown ruler Omar al-Bashir in December.

Protesters want the military leaders to fall from power as al-Bashir did.

The ruling Transitional Military Council (TMC), which took over after the coup in April, blamed protest leaders for the deaths after they diverted the routes of their marches.

General Gamal Omar, a member of the council, said in a statement that it was regrettable that the Forces for Declaration of Freedom and Change, which represents the protesters, diverted marches towards the presidential palace and the military headquarters.

But Rabie said the TMC was culpable for the killings on Sunday. “The TMC bears full responsibility for what happened yesterday… We hold the TMC responsible because those who were killed were shot under the eyes of the security forces, which either killed them or failed to protect them.”

Sunday’s mass protest – dubbed the “millions march” – was the first such rally since the June 3 crackdown on a protest camp outside the military headquarters in Khartoum killed about 100 people and wounded hundreds of others.

Tens of thousands of protesters flooded Khartoum and Omdurman on Sunday, along with several other cities and towns across the country. 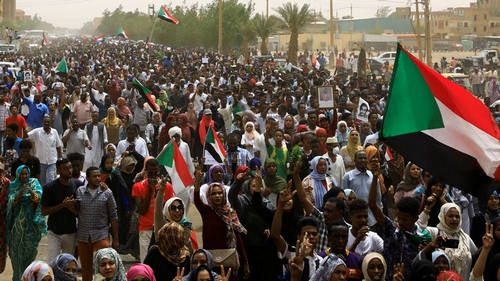 Protesters who spoke to Al Jazeera, which was banned by the TMC from reporting in the country, said there was a “huge turnout” in Khartoum despite a widespread internet blackout.

Sunday’s march came as the African Union (AU) and neighbouring Ethiopia stepped up efforts to mediate the ongoing crisis between the protest organisers and the TMC.

Rights groups have demanded the TMC guarantee the safety of demonstrators but on Saturday, on the eve of the rallies, the ruling generals warned that they would hold the protest movement responsible for any deaths or damage.

Tensions have been high since the collapse of talks over who should lead a new governing body – a civilian or a soldier.

Ethiopia and the AU have proposed a blueprint for a civilian-majority body, which the generals say could be a basis for resuming talks.

Panic in Kashmir after India asks tourists and pilgrims to leave