Egyptian President Abdel Fattah el-Sisi has met in Cairo the deputy head of Sudan’s ruling Transitional Military Council (TMC), General Mohamed Hamdan Dagalo, whose forces have been accused of carrying out a brutal crackdown on pro-democracy demonstrators in June. 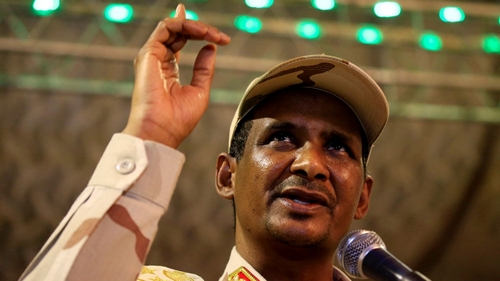 Dagalo, who is widely known as Hemeti and is seen as the most powerful of the generals now running Sudan, “presented the latest developments on the current situation in Sudan”, the Egyptian presidency said after Monday’s meeting in the capital.

El-Sisi, a former army chief-turned-president, reiterated Egypt’s “strategic support” in maintaining “the stability and security” of its neighbour, Sudan, the presidency added.

Egypt’s government has been a strong backer of TMC after the military overthrew long-time President Omar al-Bashir on April 11 in the wake of months-long mass protests against his three-decade autocratic rule.

His meeting with el-Sisi came a day before talks between the TMC and the protest leaders were set to resume.

On July 17, the two sides signed a power-sharing deal aimed at forming a joint civilian-military ruling body which, in turn, would install civilian rule. The negotiations on Tuesday are meant to iron out remaining issues between the two sides.

The protests in Sudan were triggered in December following the tripling of the price of bread but quickly transformed into a challenge to Bashir’s rule. Demonstrations continued after his removal as protesters intensified their demands for a transition to civilian rule.

A joint probe by prosecutors and the TMC on Saturday said that security forces, including an RSF general, took part in the raid on the protest camp outside the military headquarters in the capital, Khartoum, despite having no orders from their superiors to do so.

Hemeti has consistently denied that his men were involved in the crackdown, which triggered international outrage.

On Sunday, Sudanese police fired tear gas at scores of protesters demanding an independent probe into the June raid.

Separately, the doctors committee linked to the protest movement said on Monday that five protesters, including four student,s were shot dead and several wounded at a rally in a town in central Sudan.

“Five martyrs succumbed to direct wounds from sniper bullets during a peaceful rally in al-Obeid,” the committee said in a statement.

The reason for the rally was not immediately clear.

What’s happening in Sudan: Six things to know about the unrest

What’s at stake in next round of Sudan negotiations?