Khan’s campaign slogan was “Naya (new) Pakistan”, but a year into his premiership he is nowhere close to building a new Pakistan. What is worse, the country has regressed in many ways during his tenure, especially in terms of the economy, political stability and the state of human rights in the country. 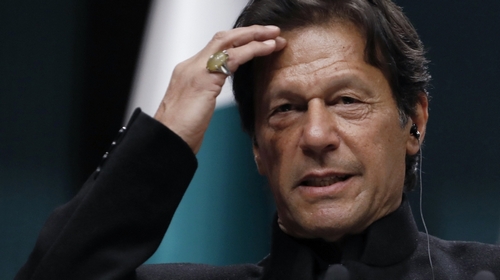 Pakistan’s Prime Minister Imran Khan walked back on many of his campaign promises in his first year in office, writes Siddiqui AP Photo

It has been a year since Imran Khan became Pakistan’s prime minister following what many consider the dirtiest general election in the country’s 73-year history, with opposition parties and international observers alleging that it was the all-powerful Pakistan military that made the former cricketer’s victory possible.

Khan also walked back on many of his campaign promises in his first year in office. These reversals gained him the embarrassing nickname “U-turn Khan” and forced him to publicly defend his record, saying: “A leader who does not take ‘U-turns’ in the best interests of the nation is not a ‘real leader’.”

However, none of Khan’s many U-turns have helped Pakistan in any way.

Khan’s biggest blunder so far was on the economic front – the country’s currency is in a devaluation spiral and has lost 35 percent of its value in just one year. The situation got so bad that Khan had to reshuffle his ministerial cabinet and remove the finance minister he had marketed for years as the solution to Pakistan’s financial woes.

As a candidate, Khan had promised to fix Pakistan’s sinking economy without taking any foreign loans. However, his government broke all previous records by borrowing $16bn in just one year – the highest ever external borrowing in any fiscal year since Pakistan’s creation in 1947.

Over the last year, the country’s economic growth rate has also halved – down to 3.3 percent, the lowest in nine years. Meanwhile, the government’s trade and fiscal deficit continue to widen.

Khan knows the problem lies with revenue generation, as many well-off citizens do not pay taxes in the country. But the rich continue to evade taxes and are not interested in paying up, leaving the poor to pay more through indirect taxation, creating more poverty and further discontent among the masses.

While the country goes through this financial meltdown, Khan is also adding to the country’s political volatility, further damaging the economy.

Before he came to power, Khan repeatedly said the country was not progressing because of corrupt politicians who had stashed their wealth abroad and promised to bring back this stolen money. Once in power, he did go after some of these politicians, but the authorities have been unable to find anything substantive to return.

Moreover, many corrupt members of Khan’s party have not faced any probes. Also, it has recently been claimed that, in some cases, the “accountability” judges were blackmailed into convicting Khan’s political opponents without substantial evidence of wrongdoing. All this led many in Pakistan to brand Imran Khan’s accountability drive a political witch-hunt aimed at silencing the opposition.

In the last year, the military and the government also used other charges to implicate and silence opposition figures. Rana Sanaullah,  who is a prominent parliamentarian and vocal critic of Khan’s government, for example, was recently arrested for allegedly trafficking drugs by the military-run anti-narcotics force. Sanaullah had predicted his detention a few days before, stating that he was going to be arrested soon and the government was contemplating under what charges to detain him.

This wave of political crackdowns ignited a people’s movement in Punjab, the largest province in the country. Thousands of people, led by Maryam Nawaz Sharif, the daughter of the imprisoned former Prime Minister Nawaz Sharif, took to the streets across Pakistan on July 25 to protest the new government’s assault on opposing voices.

Ms Sharif had recently taken to social media to ask those who wish “to live in a free, democratic and just Pakistan” to join her movement. “I shall be leading protest rallies across Pakistan that will not only ask for justice for Nawaz Sharif but demand rule of law, freedom of expression, end to manipulation of the entire system to punish public representatives, stealing people’s mandate, imposition of selected,” she said on Twitter.

However, while some of the opposition protests were covered live by Pakistan’s domestic news television channels, the Nawaz-led main demonstration in the city of Quetta was not covered by Pakistani media. The blackout was due to a federal cabinet order earlier this month banning coverage of opposition political leaders who are under investigation for corruption.

Given the ongoing deterioration of media freedoms in Pakistan, not many journalists are willing to go against the government’s wishes. Earlier this month, three news channels that ignored the cabinet order and covered a news conference by Ms Sharif were taken off the air, demonstrating the current government’s disturbing dictatorial tendencies.

However, its not only the Pakistani journalists who suffer at the hands of a government hellbent on silencing all opposing voices.

Pakistani human rights activists who speak up about the rule of law and people’s rights are also being targetted by the authorities. Gulalai Ismail, an award-winning women rights activist, is currently in hiding for supporting the plight of the Pashtun community, Pakistan’s second-largest ethnic group, through the Pashtun Tahaffuz (protection) Movement, the PTM.

PTM has been protesting for over a year, demanding accountability for the military’s actions in the tribal belt near the Afghanistan-Pakistan border where the Pakistan Army has been conducting operations since 9/11 with no civilian oversight.

But, instead of listening to their demands, both the military and the government went on an assault against the movement, ordering the media to not to cover any of their protests and arresting their leaders. Two of the movement’s parliamentarians, Mohsin Dawar and Ali Wazir, were recently imprisoned for allegedly attacking a military check-post, even though video evidence of the incident clearly shows that the soldiers opened fire on them first as they were passing through with a group of unarmed demonstrators.

Before coming into power, Khan had appeared at a PTM rally, promising to take up the movement’s cause. In fact, he campaigned against the Pakistan military’s operations himself for years and blamed the leadership’s decision to partner with the US in imposing the so-called war on terror, which resulted in Pashtun suffering.

However, after becoming prime minister, he swiftly forgot his promises and abandoned the Pashtun cause. He now seems to be following the same path as previous governments, unequivocally supporting the Pakistan military’s actions on the tribal belt. He also recently went to the US for the first time as prime minister and agreed to work with Washington “to bring peace and economic stability in South Asia”, seemingly forgetting how he used to accuse the US of destroying peace in Pakistan.

So why has Khan made so many U-turns and become almost a different person after only a year in power?

It appears that the country’s powerful generals, known to influence politics from behind the scenes, have installed Khan as prime minister to be able to control the country while keeping up the pretence of democracy. Khan is forced into making so many U-turns because it is not him taking the decisions and determining policies, the establishment is.

But there seems to be one thing that Pakistan’s generals are failing to understand: A country as diverse as Pakistan can not flourish while its civilian rulers are being manipulated by the military behind the scenes.

Pakistani democracy cannot prosper until the media is free, human rights protections are robust and  elected officials are allowed to make decisions without any external pressure. The Pakistani people will not tolerate being ruled by puppet governments forever. While Khan seems to have survived politically his first year in office, if he does not change course and meet the demands of the Pakistani people he promised to serve, he may not be so lucky in the near future.