Kenya’s Finance Minister Henry Rotich and other treasury officials have been arrested on corruption and fraud charges related to a multi-million dollar project to build two massive dams, police said. 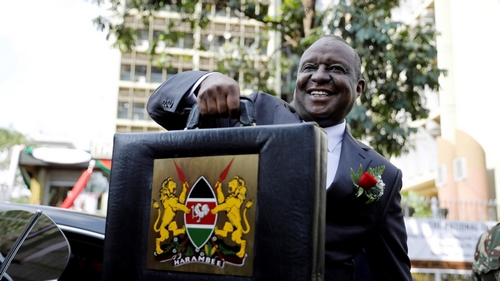 Rotich, his principal secretary and the chief executive of Kenya’s environmental authority handed themselves in to the police on Monday, hours after the country’s chief prosecutor ordered the arrest and prosecution of Rotich and 27 other top officials.

“They are in custody now awaiting to be taken to court,” police chief George Kinoti told AFP news agency.

“We are looking for the others and they will all go to court.”

Rotich’s arrest marks the first time a sitting Kenyan minister has been arrested on corruption charges, in a country where graft is widespread. The charges against him stem from a police investigation into the misuse of funds in a dam project overseen by the Italian construction company CMC Di Ravenna.

“They broke the law on public finance management under the guise of carrying out legitimate commercial transactions, colossal amounts were unjustifiably and illegally paid out through a well choreographed scheme by government officers in collusion with private individuals and institutions,” Haji told a news conference earlier on Monday.

‘Nothing to worry about’

According to the contract, the project was to cost a total of $450m, but the treasury had increased this amount by $164m “without regard to performance or works”, he said.

Some $180m has already been paid out, with little construction to show for it.

Another $6m was paid out for the resettlement of people living in areas that would be affected by the project, but there is no evidence of land being acquired for this, he said.

“I am satisfied that economic crimes were committed and I have therefore approved their arrests and prosecutions,” said Haji.

Rotich’s arrest will send shockwaves through the political elite, who are accustomed to corruption scandals resulting in little official action.

Earlier this year, Rotich’s questioning by police provoked an angry reaction among politicians from the minister’s powerful Kalenjin ethnic group.

The  area saw some of the worst violence after the disputed 2007 elections, in which 1,200 people died.

On Monday, Ruto’s allies played down the charges.

“There is nothing to worry about. Relax,” Kipchumba Murkomen, the senate majority leader and a Ruto ally, told reporters.

Critics have accused President Uhur Kenyatta, who was re-elected for a second term last year, of failing to deal with corruption despite his promises to do so.

“We’ve seen the president coming out very strongly over the years saying he wants to make this issue a priority, he wants to leave behind a corrupt-free country, but a lot of Kenyans are disappointed,” Al Jazeera’s Catherine Soi said, reporting from Samburu County in Kenya.

“Over the years we’ve seen major scandals involving public money, million of dollars, involving public figures as well… arrests have been made. But then people are saying that beyond that nothing happens, they have not seen any convictions,  those who are found culpable haven’t seen their assets frozen, or their money returned to taxpayers,” she said.

“Thirty percent of government expenditure is lost to corruption and mismanagement.. a lot of Kenyans are saying that they need the president to do more if this fight against corruption is to be won,” Soi added.

Rotich’s arrest was a “significant” step on a very long road, said Samuel Kimeu, the head of Kenya’s chapter of Transparency International.

But he added: “I would not be celebrating arrests. We need to see people in jail and we need to see what has been stolen recovered.”