China’s military has recently carried out air and naval drills along its southeast coast, the defence ministry has said, in an announcement that came after Beijing demanded the cancellation of a potential arms sale from the United States to self-ruled Taiwan.

In a brief statement on Sunday, the ministry described the exercises as “routine arrangements in accordance with annual plans for the military”.

It said they were held in “recent days”.

On Friday, China said it would impose sanctions on US firms involved in a deal to sell $2.2bn worth of tanks, missiles and related equipment to Taiwan, saying it harmed China’s sovereignty and national security.

That announcement came as Taiwanese President Tsai Ing-wen visited New York on a transit stop to diplomatic allies in the Caribbean, a trip that has also infuriated Beijing, further straining Sino-US ties already affected by a bitter trade war.

Prior to leaving for the US, Tsai said the island was facing threats from “overseas forces”, in a veiled reference to China. 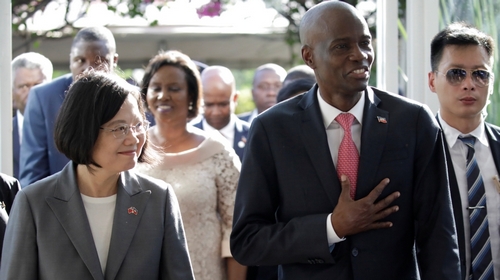 China, which claims self-ruled and democratic Taiwan as its own and views it as a wayward province, had called on the US not to allow Tsai to transit there on her overseas tour.

In a statement on Sunday, Taiwan’s Presidential Office cited National Security Council Deputy Secretary-General Tsai Ming-yen as saying Tsai had spoken by telephone with US House Speaker Nancy Pelosi while she was in the US and met with other senators and members of Congress, without naming them.

Tsai said Taipei and Washington could forge even closer ties, and also thanked the US for “the importance it attaches to the security of the Taiwan Strait” and the recently announced arms sale, the statement said.

The Taiwanese president has repeatedly warned of the threat from its giant neighbour and has vowed to defend Taiwan’s security, democracy and way of life.

China has in recent years stepped up its military drills around Taiwan, including regularly flying what Beijing calls “island encirclement” exercises and sending warships into the waters around Taiwan.

On Saturday, Tsai made a brief visit to Haiti, in an attempt to court Taipei’s dwindling allies in the Caribbean in a diplomatic struggle with China.

Since Tsai became president, Beijing has poached five of the island’s shrinking roster of allies, including Haiti’s neighbour the Dominican Republic, which broke diplomatic ties with Taiwan last year.

The visit to the Haitian capital, Port-au-Prince, was the first stop on a 12-day trip to the Caribbean, with St Vincent and the Grenadines, St Lucia, St Kitts and Nevis to follow.

She spoke with her Haitian counterpart, Jovenel Moise, to discuss possible cooperation in education and infrastructure.

Haiti is now among only 17 countries in the world to still officially recognise Taiwan.

Taipei has allocated $150m to the country to help electrify its territory but the funds have not been allocated because they have yet to be ratified by the Haitian parliament.

Taiwan’s allies in the Caribbean and Central America have dwindled in recent years. In 2017, Panama cut ties with Taiwan to establish relations with China.

El Salvador and the Dominican Republic have followed suit, and Honduras has signalled it may do the same.

Officials from the US warned El Salvador against the move, cautioning against a “predatory” China.

Taiwan has ruled itself for seven decades but most countries do not recognise it – including the US, which switched diplomatic recognition from Taipei to Beijing in 1979.

Yet Washington remains its most powerful unofficial ally and biggest arms supplier, and has pressured Haiti to maintain its relationship with Taipei.

China has vowed to one day to reassert control over the island, by force if necessary.