The crackdown has left some international human rights groups and lawmakers questioning whether Vietnam has breached the spirit of trade agreements with western countries – accords that have helped propel the country to a position of economic strength in Southeast Asia.

“I have been summoned by the police several times since 9 December 2020,” said Nguyen Quang A, a veteran activist in Hanoi, declining to detail the circumstances saying he was subject to an ongoing investigation. He told Reuters Vietnam’s security ministry had in recent weeks rounded up other government critics without saying why, citing his contacts with activists.

As Vietnam’s ruling Communist Party gears up for its most important meeting in years, its leadership has presided over an intensified crackdown on dissent, according to rights groups, activists and data collated by Reuters.

A record number of political prisoners, longer jail terms, and increased harassment of activists in recent years have contributed to the crackdown ahead of this week’s Communist Party congress, a gathering to determine national leadership and policy that takes place once every five years.

“They the police summon them and find reasons to convict them under those very fuzzy articles of criminal law. It completely violates the law but they use it very regularly,” said Mr Quang A. “I’ve told them they can’t shut me up.” 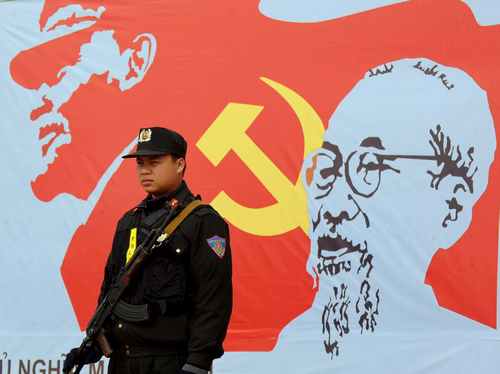 Vietnam’s foreign ministry, which handles inquiries from foreign media, did not respond to Reuters’ request for comment on activist detentions.

Vietnam drew international condemnation this month when it sentenced three freelance journalists known for criticism of government to between 11 and 15 years in prison, finding them guilty of spreading anti-state propaganda.

The country’s constitution says it protects “freedom of opinion and speech, freedom of the press, access to information, to assemble, form associations and hold demonstrations”.

In reality, public criticism of the Party is not tolerated, and groups which promote democratisation are targeted by the authorities in a battle playing out online on platforms like Facebook, Vietnam’s premier platform for both e-commerce and dissent.

A Reuters tally based on state media reports found 280 people were arrested for “anti-state” activities over the five years since the last Party congress: 260 were convicted, many being sentenced to more than 10 years in jail. In the five years leading up to the 2016 congress, there were 68 arrests and 58 convictions.

Last year, Amnesty International said it had recorded the most “prisoners of conscience” in Vietnam since it began publishing figures in 1996 – 170, close to double the 97 recorded in 2018. Of the 170, some 70 were detained for online activism, Amnesty said.

In late 2017, Vietnam unveiled a 10,000-strong military cyber unit, Force 47, to counter what it said were “wrong” views on the internet. According to rights groups, the unit also recruits volunteers online to target dissidents and activists.

Reuters reviewed dozens of posts across multiple Facebook groups and pages from December and January that claimed links with Force 47. Many attacked prominent activists, including Nguyen Quang A, accused by one group of creating anti-state propaganda.

Some group moderators were dressed in military uniform in their profile photos while others ran pages for official local branches of Communist Party organisations.

Last November, Vietnam threatened to shut Facebook down if it didn’t toughen rules on local political content on the platform.

Facebook’s local servers had been taken offline by the government earlier last year until it agreed to significantly increase policing of “anti-state” posts by local users, a request with which Facebook previously said it complied.

For some, the crackdown has a connection with fluctuations in global trade ties with Vietnam.

“The early visit of Prime Minister Nguyen Xuan Phuc in 2017 to the Trump White House saw human rights completely dropped from the agenda,” he said.

“The EU had an important opportunity to make real changes through the EU-Vietnam Free Trade Agreement,” said Mr Robertson, referring to a pact that has been a boon for Vietnam. Instead, he said, the EU “fell short, settling for vague promises … instead of substantive changes.”

After the jailing of the three journalists earlier this month, the UN human rights office said, “Coming just weeks ahead of the Party congress, the convictions and long sentences are not only a blatant suppression of independent journalism but also a clear attempt to create a chilling effect among those willing to criticise the government.”

The United States described the sentences as the “latest in a troubling and accelerating trend of arrests and convictions of Vietnamese citizens exercising rights enshrined in Vietnam’s constitution.”

Zarif says US sanctions against him ‘failure’ for diplomacy