While police fired rubber bullets and tear gas at protesters on Hong Kong Island, suspected triad gangsters descended on a subway station in a northwest territory closer to mainland China, apparently targeting participants from the protests and sending passengers screaming into cars and hallways.

The unprecedented attack on Sunday night follows seven weeks of mass demonstrations that have stoked fears the Chinese territory is spiralling out of control.

At least 45 people were injured, including a pro-democracy legislator and journalists. By Monday night, police arrested six men in connection with the attacks.

Sunday assaults mark a dark turn in a movement where radicalism has become the new norm as the government descends deeper into political crisis.

Why did this happen?

Millions of people have taken to the streets in recent weeks. The demonstrations have largely been peaceful, but a fringe of more radical protesters have escalated action, including the storming and vandalising of the city’s parliament.

“First I think some suspected criminal elements were mobilised to target the pro-democracy protesters so as to teach them a lesson, to tell their parents that the children should not go out to protest,” says Sonny Lo, a veteran Hong Kong political commentator and author.

“As protests expand further north closer to the Chinese border -areas known for triad operations – and escalate action, protests may have “alienated and antagonised some people with suspicious backgrounds”, says Lo.

“So accordingly, there was a sort of retaliation from the suspected criminal and forceful elements.”

Where were the police?

A major outcry ensued after the attacks with people saying police did not rush fast enough to the scene. Police Commissioner Stephen Lo said forces arrived in 35 minutes because police were wanting for manpower while dealing with the protest on Hong Kong Island. 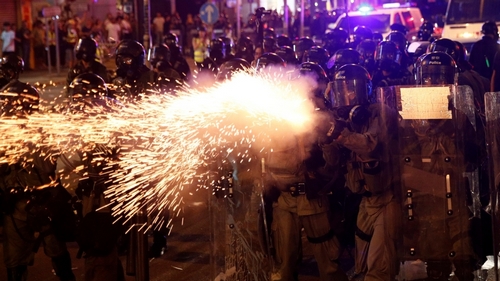 Riot police have responded to the protests with force, using tear gas and rubber-coated bullets on protesters Edgar Su/Reuters

“Every time there is a major event which may lead to violent confrontation, we have to redeploy our manpower from various districts to Hong Kong Island, so that I can ensure sufficient manpower to deal with these incidents,” Lo said.

“Violence will only breed more violence. We will review our manpower deployment and do our best to ensure the public order and safety in all districts of Hong Kong.”

Lo denied allegations of colluding with the mob.

Who are the mobsters?

It remains unclear, but there is widespread speculation the masked assailants are affiliated with local organised crime syndicates, also known as the triads.

“Governments outsource violence to third-party agents for plausible deniability,” says Lynette Ong, a University of Toronto political scientist whose research on “thugs-for-hire” found this to be a common phenomenon in mainland China and beyond.

“The anti-extradition law protests have reached a new height with the use of outsourced violence against protesters. My reading is this strategy is used to intimidate and wear out protesters in order to deter further escalation. While this may work to ward off protests, it also hurts the government’s legitimacy in the long-run.”

During the 2014 Occupy Central – a similar but more peaceful 79-day movement calling for the ability to directly elect Hong Kong’s leaders – alleged pro-government gangs attacked pro-democracy protesters and tore down encampments in the shopping district of Mong Kok. Police arrested 19 men, including eight with triad-links.

“If they run the business harmoniously, then police can keep them at bay. But once they emerge in the political arena, that’s a very dangerous scenario.

“If the triad evolves into political actors, that would be harmful to social stability and public confidence in Hong Kong,” he adds.

How have people responded?

Hong Kong’s embattled leader Carrie Lam condemned the violence in a Monday afternoon press conference and vowed a police investigation. “Violence is not a solution to any problem. Violence will only breed more violence,” the chief executive said. “We absolutely do not tolerate such violence.”

Lam also denied accusations of triad collusion. “Everyone should distance themselves from violence. Any accusation that the administration, me, the police chief and his colleagues colluded with the mob is groundless,” Lam said. 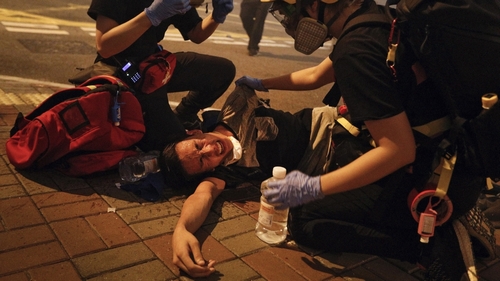 Pro-Beijing legislator Junius Ho, who was filmed shaking hands with men in white shirts on Sunday night for unknown reasons, defended the mobsters on Monday saying they were “defending their home and people”.

That’s the question everyone is asking. Nobody seems to know, but as action escalates and the government refuses to stand down on the anti-extradition bill and address protest demands, there is little sign of demonstrations coming to an end.

And of course, there is always the looming question of Chinese intervention, and observers often draw quick parallels to the 1989 Tiananmen Square massacre.

“A very specific, also very worrying, historical parallel is that People’s Daily has been using terms to denigrate the Hong Kong protests that are very similar to those the same paper used to denigrate the Beijing protests of 1989 – before declaring a state of martial law,” says history professor Jeffrey Wasserstrom of the University of California, Irvine, citing several historical echoes in protest and repression in 20th century China, his area of expertise.

“Of course Beijing is not the Red Cross. If they want to crack down on us, I wouldn’t be surprised,” says Emily Lau, former chairwoman of Hong Kong’s Democratic Party.

“Hong Kong is not Tiananmen Square. There is a lot hanging on Hong Kong’s place as an international business centre. Hong Kong has taken decades to build up. Why would you want to destroy a city in days?”