Sudan’s ruling generals and a coalition of protest groups are set to meet on Friday to continue crucial negotiations on the back of signing a power-sharing agreement earlier this week. 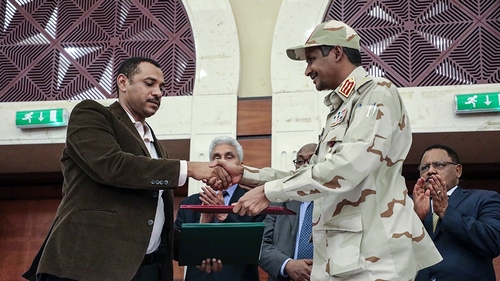 African Union-backed talks between the Transitional Military Council (TMC) and the Forces of Freedom and Change (FFC) alliance have faced a series of setbacks and delays since the overthrow of long-time President Omar al-Bashir in April in the wake of popular protests against his autocratic rule.

Progress towards a final political deal has been slow and marred by deadly violence against pro-democracy demonstrators, casting doubt on protesters’ hopes for civilian rule.

Here’s all you need to know about the efforts to resolve Sudan’s political deadlock.

What has been agreed so far?

After a long period of stalled negotiations, the two sides on Wednesday signed a political accord to create a joint-ruling body tasked with creating a transitional administration that would govern for just over three years, after which elections will be held.

The 11-member governing body, called the Sovereign Council, will be composed of five military personnel chosen by the TMC and five civilians selected by the FFC. The remaining member will be a civilian picked by consensus between the two sides.

The body will be headed by a general during the first 21 months of the transition, followed by a civilian for the remaining 18 months.

The umbrella protest movement will nominate the prime minister, who will name a cabinet of 20 ministers, excluding the interior and defence ministers, the accord said. The Soverign Council’s military personnel will appoint these two officials.

Read more about the political accord here.

The TMC and the FFC wil meet on Friday to for negotiations on key remaining issues crucial to a successful transition.

The goal is to thrash out the details of the “constitutional declaration”, which will determine the powers and functions of the Sovereign Council.

Al Jazeera’s Hiba Morgan said negotiations on this more contentious document that is meant to complete the political deal are “likely to take days”, pointing to a number of sticking points.

The most heated issue is expected to be the TMC’s demand for “absolute immunity” from prosecution for the military figures who will be part of the new joint governing body.

The protest movement has strongly rejected blanket immunity amid growing concerns about the effectiveness of an independent investigation with the military still in charge. Protest leaders suggested a “temporary immunity” be offered that would be valid as long as the member is in service.

The issue mainly refers to the deadly raid carried out on June 3 against the sit-in outside the military headquarters in Khartoum, the focal point of protesters’ months-long struggle for civilian rule.

Witnesses says the crackdown against the demonstrators was led by the Rapid Support Forces (RSF) paramilitary group. RSF commander General Mohamed Hamdan Dagalo, who is also the TMC’s deputy chief, has dismissed the accusation as an attempt to distort the image of his troops.

Doctors linked to the opposition said at least 128 people were killed in the raid and ensuing violence, with dozens of bodies recovered from the Nile River. Authorities confirmed 61 deaths.

“If the Transitional Military Council remains stubborn then it will be a rock in the road of an agreement,” Salih said.

Al Jazeera’s Morgan said the TMC “may have to bend on this and give in to some terms”, otherwise opposition supporters will not accept a deal.

Protesters continue to hold rallies to honour those killed since their movement began in December 2018.

“Just on Thursday, thousands came out in rallies and staged a temporary sit-in in Khartoum demanding accountability for the protesters killed during the attack on the sit-in,” Morgan said.

“They are the FFC’s base, and not fulfilling that demand of accountability and letting the TMC have absolute immunity will also weaken the FFC,” she added.

What other obstacles are in place?

Meanwhile, some members of the FFC have rejected the deal between the two sides, saying it does not fulfil the expectations of protesters.

Al Jazeera’s Morgan said the FFC faced the challenge of maintaining a united front during the negotiations.

“Armed groups have rejected the political agreement, as well as several other parties and movements within the FFC,” she said, speaking from Addis Ababa in neighbouring Ethiopia.

Authorities in Sudan have shut down Al Jazeera’s Khartoum bureau and banned its journalists from reporting from the country.

“If there’s disagreement, there’s a risk of the FFC fracturing and that’s something they can ill-afford at the moment,” Morgan said.

She added that the umbrella protest movement will have to convince its different factions that the deal was not as bad as they thought.