At least 10 people were killed and at least 10 others were feared trapped under rubble after a building collapsed during heavy monsoon rains which lashed India’s financial capital Mumbai on Tuesday, officials said. 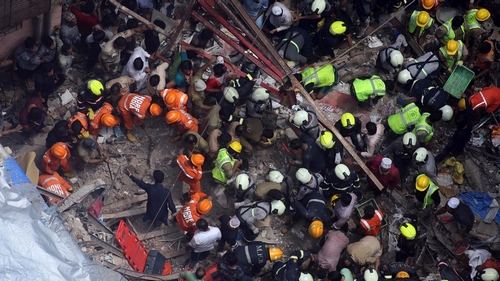 Torrential downpours have swept away homes, triggered landslides and claimed at least 180 lives across South Asia.

“Rescue operations will continue till everyone stuck under the debris is rescued. Over 10 people are still stuck inside.”

Fire official Ashok Talpade said the families had been asked to vacate the dilapidated building some time ago but they continued to live there.

“The building crashed with a heavy sound and we thought there was an earthquake,” a resident told the New Delhi Television news channel.

Maharashtra state’s Chief Minister Devendra Fadnavis told reporters that the building was 100 years old and 15 families were living there.

Prime Minister Narendra Modi tweeted his condolences to the victims’ families, describing the incident as “anguishing”.

Waris Pathan, an opposition politician, said the building was a death trap, with authorities saying they had no money to rebuild the structure.

Building collapses in Mumbai, home to 20 million people, are common during the monsoon season because rickety structures buckle under the weight of continuous rain.

Earlier this month, a wall collapsed in the city, killing 29 people.

Sudan crackdown: All the latest updates

Events in Catalonia and Kurdistan are causing pangs in Taiwan