A car bombing in Kabul during morning rush hour on Wednesday targeted a private security company’s convoy with officials saying 12 people were killed, including children.

The attack also wounded 20 people, including four of the company’s foreign staff, but their nationalities were not released. Reports in the immediate aftermath of the attack said seven died but a new death toll was later released.

The explosion occurred in the Qasaba area in the Afghan capital. The GardaWorld security company – based in Montreal, Canada – was the apparent target, according to Nasrat Rahimi, an interior ministry spokesman.

A vehicle belonging to the security company and two private cars were damaged in the attack, Rahimi added.

Ambulance sirens were heard shortly after the car bomb went off and a large plume of smoke rose from the area – scenes all too familiar for Kabul and other cities and towns across Afghanistan.

Among those killed were 12-year-old Dunya and her 7-year old brother who were on their way to school.

The two children were walking with their father when the car-bomb detonated. The father, who was severely wounded and lost a leg and a hand, was in hospital, according to reports on social media.

No one immediately claimed responsibility for the attack.

The Taliban and Islamic State of Iraq and the Levant (ISIL or ISIS) are active in the capital and have previously claimed attacks in Kabul.

The Taliban control or hold sway over half of Afghanistan, staging near-daily attacks that target Afghan forces and government officials but also kill scores of civilians.

In other violence, at least four Afghan army soldiers were killed on Monday night during an air strike by US forces in eastern Logar province, said Anwar Khan Ishaqzai, the provincial governor. Six other troops were wounded in the attack near Puli Alam, the provincial capital.

The air strike came as a gun battle was under way between the army and the Taliban in the area, the governor said, adding an investigation was started into the “friendly fire” strike.

A spokesman for US forces in Afghanistan said the coalition was aware of the reports from Logar.

“US and Afghan forces are working closely together to develop a shared understanding of this event. A joint investigation is ongoing” said the spokesman, speaking on condition of anonymity under regulations.

Also on Monday night, five policemen were shot and killed at their checkpoint in western Herat province, said Abdul Ahid Walizada, the provincial police chief’s spokesman. Walizada said three other police officers were wounded in the attack in Oby district. 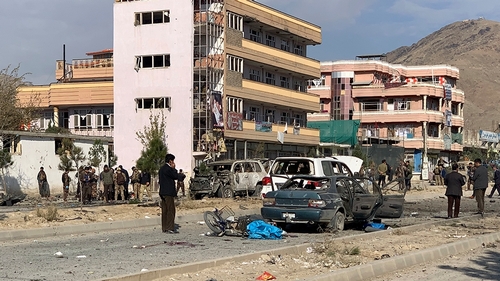 The violence came a day after President Ashraf Ghani announced the government in Kabul would release three high-ranking Taliban prisoners in an apparent prisoner swap for Western hostages who had been kidnapped by the group in 2016.

The three Taliban prisoners include Anas Haqqani, who was seized in 2014 and whose older brother is the deputy Taliban leader and head of the Haqqani network, a Taliban affiliate.

Ghani did not specify the fate of the Western hostages – an Australian and an American, both professors at the American University in Kabul – and it was not clear when or where they would be freed.

The president said on Tuesday he hoped the decision would help “pave the way” for unofficial direct talks between his government and the Taliban, who have long refused to negotiate with the administration in Kabul.