Millions of people in India’s capital have started their day choking through “eye-burning” smog, as the city government put restrictions on the number of private vehicles on Delhi roads amid an air pollution crisis.

Kejriwal’s government has ordered half the city’s private cars to be taken off the road, based on an odd-even registration plate system EPA

Pollution levels are so high that schools have been shut, flights have been cancelled and a public emergency declared as experts say the air in New Delhi is similar to smoking up to 50 cigarettes a day.

“I have a headache every day I wake up. It’s suffocating to breathe sometimes. And inflammation in the nostrils and all. And eyes also. Like it kind of burns,” Ankusha Kushi, a student, told AFP news agency.

As Delhi residents woke up on Monday, levels of particulates measuring less than 2.5 microns – so tiny they enter deep into the respiratory tract – were at 613 micrograms per cubic metre of air, according to the US embassy in Delhi. The World Health Organization’s (WHO) recommended safe daily maximum is a reading of 25.

Air pollution at this level can aggravate heart and lung disease and also poses serious risk to the respiratory systems of the general population.

The current crisis – the worst in three years – prompted Delhi Chief Minister Arvind Kejriwal to announce a range of measures to fight what he described as “unbearable pollution”.

Authorities in Delhi have ordered half the city’s private cars to be taken off the road, based on an odd-even registration plate system – a decision many experts said was not enough and “too little, too late”.

Delhi’s seven million motorbikes and scooters, public transport and cars carrying only women were exempt from the restrictions.

“There is smoke everywhere and people, including youngsters, kids, elderly are finding it difficult to breathe,” Kejriwal said in a video posted on Twitter.

As smog levels exceeded those of Beijing by more than three times, authorities also parked a van with an air purifier near the Taj Mahal – the iconic 17th-century marble mausoleum 250km (150 miles) south of Delhi – in a bid to clean the air in its surrounds, the Press Trust of India reported.

The air quality index, measuring levels of PM 2.5, tiny particulate matter in the air, deteriorated to above 900 on Sunday, way over the 500-level that qualifies as “severe-plus”.

Aside from the harm it was doing to the lungs of some 40 million people living in the capital region, the smog was so bad more than 30 flights were diverted from Delhi airport due to poor visibility.

Schools, which were closed on Friday last week, remained shut on Monday, and city-wide construction was halted until Tuesday in Delhi and surrounding areas.

Kejriwal, who likened Delhi to a “gas chamber” on Friday, said his city had done its part to curb pollution and that the burning of wheat stubble residue on farms outside the capital was responsible for the smog.

But Environment Minister Prakash Javadekar accused Kejriwal of politicising the issue, while an MP from the governing Bharatiya Janata Party (BJP) dismissed the odd-even car rule as a “stunt” and said he planned to ignore it.

I agree Ashutosh. Pollution due to stubble burning is not in our hands though we r distributing masks to our Delhiites to reduce its ill-effects on the health of our people. However, lets try to reduce pollution due to local sources as much as we can. https://t.co/JWhmbXmwfo

Al Jazeera’s Anchal Vohra reporting from Delhi said the conditions were really bad. “The air is unbreathable,” she said.

Talking about the new measures she said they were expected to help “a little”.

“A huge part of the pollution is vehicular pollution, so if you halt the number of vehicles, then yes I believe it should help.”

“But the large part of this pollution is because of farmers burning the stubble in neighbouring states which are also fighting pollution, but there is no political consensus… no clear directions as to what the government plan is.

“So as long as farmers keep burning the stubble, and in winter the pollution is expected to be high,” Vohra  added. 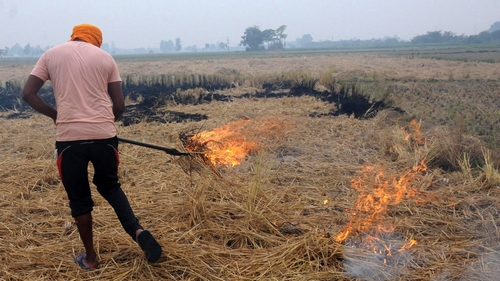 India has faced a mounting pollution crisis over the past decade.

Fourteen Indian cities including the capital are among the world’s top 15 most polluted cities, according to the WHO.

Experts warn that both state and national governments need to go beyond short-term remedies and tackle major pollution causes if air quality is to improve in the long term.

Amid lack of apparent inaction from the government, angry residents in Delhi protested outside Prime Minister Narendra Modi’s residence on Saturday.

On Sunday, Modi’s top bureaucrat held meetings with officials from Punjab, Haryana, and Delhi to tackle the crisis.

He said emissions restrictions should be imposed on motorbikes and scooters, which are heavily used in Delhi but exempted from the odd-even scheme, and called for more public transport investment.