Lebanese President Michel Aoun has asked the resigned government of Prime Minister Saad Hariri to continue on a caretaker basis until a new cabinet is formed, as security forces began opening major roads after two weeks of huge protests that paralysed the country. 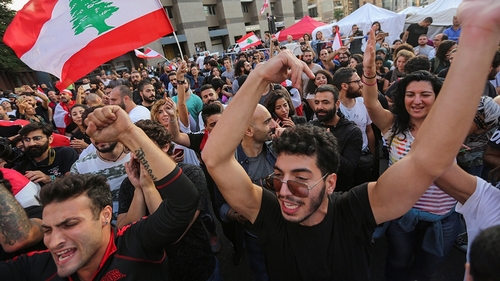 The army had asked demonstrators earlier on Wednesday to voluntarily clear all roadblocks to ensure that life returns to normal.

The move came a day after Hariri announced the resignation of his government in a televised address to the nation, saying he had hit a “dead-end” in his attempts to resolve a crisis unleashed by the massive protests against the political elite amid widespread anger over years of economic mismanagement and corruption.

Hariri’s announcement satisfied one of the main demands of the leaderless protest movement, which has brought together people from across Lebanon’s political and religious divides, but demonstrators pledged to keep pushing for deeper change.

Still, with no obvious alternative to Hariri to fill the post of prime minister, which is reserved for a Sunni Muslim in Lebanon’s power-sharing system, there is no clear way out of the political crisis.

In line with the Constitution, Aoun, who will deliver a speech on Thursday evening, asked Hariri to stay on as caretaker prime minister. The president is now expected to launch consultations with the leaders of political blocs in Parliament to discuss the appointment of a potential new prime minister.

“There is still a deadlock, but by the very fact that the president has still not set a date for these consultations to begin is an indication that they are trying to find some sort of a compromise formula behind the scenes,” Al Jazeera’s Zeina Khodr, reporting from Beirut, said.

“If they cannot reach an agreement, we might witness a prolonged power vacuum.”

Following elections last year, it had taken Hariri nine months to piece together the coalition government bringing together nearly all of Lebanon’s feuding parties, including the Shia group Hezbollah and the Maronite Christian Free Patriotic Movement.

But he entered his third government weakened by a balance of power that had shifted in favour of the heavily armed Hezbollah, which together with its allies won a majority of MPs in the elections while Hariri lost a third of his.

Lebanon is governed by a power-sharing agreement known as the “Taif accords”, designed to redistribute power after the end of its 15-year civil war in 1990. The number of seats in parliament is equally split between Christians and Muslims.The president must be a Christian and the Parliament’s speaker a Shia Muslim, while the prime minister must be Sunni Muslim.

On Wednesday, a senior official familiar with Hariri’s thinking said the politician is ready to return as prime minister of a new government, on the condition it includes technocrats and be capable of quickly implementing reforms needed to stave off an economic collapse.

The senior official, who declined to be identified, told Reuters News Agency that any new cabinet led by Hariri should be devoid of a group of top-tier politicians who were in the outgoing coalition government, without naming them.

The formation of a technocratic cabinet has been a main demand for a broad swath of the protesters who want independent experts to guide the country through a worsening economic and financial crisis and secure basic services such as electricity and water.

Meanwhile, banks on Wednesday remained closed for an 11th working day but will resume normal operations and receive customers on Friday.

“Thursday will be dedicated to internal work to complete a backlog of operations and to prepare to receive customers starting Friday morning,” the banking association said in a statement on Wednesday.

The banks have publicly cited security concerns as the reason for the closure. Bankers and analysts have also cited concern about a rush by savers to withdraw their savings or transfer them abroad once the banks reopen.

All public and private schools, universities and vocational institutions will also reopen on Thursday, according to a statement by caretaker Education Minister Akram Chehayeb.

On Wednesday, traffic began moving along major traffic arteries that had been blocked for days by demonstrators.

Al Jazeera’s Stefanie Dekker, reporting from Beirut, confirmed demonstrators were cooperating with security forces and clearing roads in the capital’s central districts – however, not all protesters were happy with the development.

“Some were saying that this is giving in to the government before all their demands have been met, while others were saying that, ‘We need to give them a few days to see what’s going to be implemented’,” Dekker said, adding that the crisis was far from over.

“The challenges start now. There is a political crisis, and we know from the past that this country has seen political deadlock without a government and a prime minister for a long time.

“Everything is up in the air as to what shape any interim body is going to have and also how long it’s going to take to agree on that – and then the big question, will the people be happy?”

Forming a government in Lebanon can typically take months, with every sectarian and party leader seeking to protect their own communal interests.

“There is no time for any of the old games,” said Heiko Wimmen, Lebanon project director at the International Crisis Group.

“The pressure of the street – and perhaps even more so the fear of economic collapse – will dictate an accelerated government formation.”

Al Jazeera’s Khodr said while there is uncertainty about what happens next, Hariri is seen by many as holding “a lot of cards” in a country that badly needs foreign investment.

“He is considered to be the leader of the Sunni community in Lebanon. Hezbollah and its allies, which hold the majority in Parliament, need him as a partner if they want the West to continue to deal with Lebanese government,” she added, citing the US sanctions faced by Hezbollah and its backer, Iran.

“What he is demanding is a technocrat government, but we understand that the ruling coalition continues to insist that the ministers of the next government will be represented by the different political factions.”