Baghdad, Iraq – A bloodstained letter warning Reham Feras not to return to Baghdad’s Tahrir Square was not enough to keep the 21-year-old medical volunteer from lending her help to Iraq’s anti-government protesters. 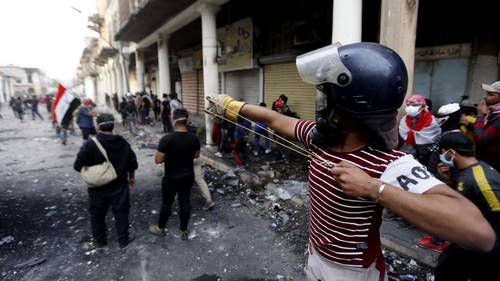 IHCHR estimates that over 2,400 protesters and volunteers may have been arrested since the start of the uprising Anadolu

Fearful that her parents would discover the threatening message left anonymously on the doorstep of their family home, Feras hid the piece of paper before slipping out the front door and going to one of the makeshift clinics at the heart of Baghdad’s uprising.

Last month, protests against Iraq’s ruling elite kicked off violent clashes between the demonstrators wearing helmets and goggles, and the heavily-armed security forces.

Since then, hundreds of thousands of Iraqis have been taking to streets to demand the removal of a government they perceive as deeply corrupt and an end to foreign interference in the country’s affairs.

More than 330 people have been killed since the uprising began on October 1, a toll that could have been higher were it not for the volunteer medics offering first aid and logistical support.

Doctors, medical students and even people without prior medical experience have been key in treating the victims of the security forces’ excessive use of violence and relocating the critically wounded to nearby hospitals.

“The main groups that are giving medical aid and treatment to the protesters are volunteer teams,” Ali Al Bayati, a member of the Iraqi High Commission for Human Rights (IHCHR), told Al Jazeera.

Feras, a medical analysis student from Baghdad, was among the approximately 500 volunteers that descended upon Tahrir Square to offer help when the second wave of protests began on October 25.

Since then, the number of medics has dwindled to approximately 150, according to the IHCHR. The drop, said Al Bayati, is a direct result of intimidation.

“There are some threats towards the medical staff working there from unknown sides,” said Al Bayati.

Threats, arrests and abductions have fuelled a collective sense of paranoia among the volunteers.

Medics from two makeshift clinics recently took down their tents and left, while others spoke softly, worried that the government’s supporters or staff had infiltrated their protests.

One medical student, who requested anonymity, said he and his team took to confiscating the bystanders’ phones and deleting videos of the medics before handing the devices back and asking them to leave.

“Some people are just suspicious,” said Abu Ahmed, a medical volunteer who did not want to reveal his real name. “They stand on the streets and take pictures of us.”

He said he had been volunteering on a daily basis when he and two of his colleagues received a mysterious call.

“You will be arrested,” said a man, claiming to belong to a local militia. According to him, the caller’s eloquence and vocabulary suggested he was a government official.

After the call, Abu Ahmed returned to his station in Tahrir, intent on aiding the protesters. But as the number of his colleagues leaving the protest grew, so did his fears of being kidnapped.

“I started to realise this was not a joke and we discovered that there were some militias inside Tahrir square,” said Abu Ahmed. The anonymous callers, he added, “speak like they are among us”.

“I have left Tahrir, I am not going back. It hurts a lot, especially when you see what you are able to do, when you help the people,” said the volunteer.

“I don’t even have a political position. I was just there to do something and now I can’t do it.”

Others, like 22-year-old first aid responder Oun Hafith, felt that staying in Tahrir was safer than returning home.

His appearance on a local news channel to talk about volunteering quickly made him a target.

Soon after his live interview, four middle-aged men, who Hafith said were not from his neighbourhood, visited his family home and warned his uncle against letting Hafith take part in the protests.

The young man has not stopped aiding the tear gas victims since.

Medical student Sama, 28, also returned to Tahrir despite her and her family members being allegedly followed for days by the same car and filming her as she walked out of her home.

“I am not scared, I am only worried about my sisters and daughter.”

According to the mother of one, some medics have been lured into houses and interrogated by unidentified men. Five of her colleagues, she said, were captured and held in a house close to Baghdad’s Sinak bridge before being released.

“In order to hurt the demonstrations, they have to destroy the logistics,” said Sama. “And that is the medics and volunteers.”

The IHCHR estimated that more than 2,400 people among the protesters and volunteers have been arrested since the start of the uprising in October. While most have been released, at least 50 are still behind bars, with some being charged under a counterterrorism law.

Three people were abducted on Friday, according to Al Bayati, a woman among them whose hair was allegedly shaved.

But who precisely is arresting and abducting activists and volunteers remains unclear, said Ben Robin-D’Cruz, a researcher on Iraqi politics at the University of Edinburgh.

“Abductions and arrests of the activists are being carried out by various groups, particularly Popular Mobilisation Forces group, Ministry of Interior SWAT teams and some of the internal security services,” he told Al Jazeera.

Dressed in white lab coats, the volunteers holding the ground at their respective medical stations in Tahrir Square ready themselves for the clashes to resume at any moment and for the wounded to begin pouring in on battered tuk-tuks.

Some, like 26-year-old Saad Ali Hussein, forego the relative safety of Tahrir for the frontlines, where he can be the first to reach the injured protesters.

Hussein, who had no medical background prior to receiving first aid training from other volunteers, watches a video he recorded on his phone the day he was caught in clashes near Khilani square, less than a kilometre away from Tahrir.

“For Imam Abbas’ sake, do not shoot, I am your brother,” a voice yells off camera in the video.

A gun-wielding member of the security forces walks across the screen. “You, brother, burn the buildings of the people?” he says, referring to a building that was recently set alight by unknown assailants.

“They asked if I was a medic. Most security forces are targeting medics,” said Hussein.

Dr Ilaf, a member of the government’s Civil Defence force tasked with emergency response, said that ambulances were also being targeted and as a result, they were refusing to go to the frontlines, leaving the tuk-tuks to do the job.

But in a country where, until 2003, the government had weakened its people by sowing mistrust among them, Tahrir’s generation has come together in a show of support for each other and against the ruling elite.

“We are one family here,” said a volunteer doctor who asked to remain anonymous. “The medics are the foundation of the revolution. Without them, the protests are not possible.”