The protests on Friday came three weeks after an earlier bout of rallies erupted as a result of widespread anger at official corruption, mass unemployment and failing public services. More than 150 people were killed during those demonstrations amid a crackdown by security forces.

Renewed anti-government demonstrations in Iraq have gripped the capital, Baghdad, and swept through several other cities in the country’s south, leaving at least 30 people dead, according to the country’s human rights commission and a monitor.

Iraqi police fired rubber bullets and volleys of tear gas canisters in response to the fresh protests, with at least 30 deaths recorded in Baghdad and the southern provinces of Basra, Maysan, Dhi Qar and Muthanna, according to the Iraqi Observatory for Human Rights.

Iraq’s semi-official Human Rights Commission also put the death toll at 30, and said more than 2,000 protesters had been wounded.

Al Jazeera’s Natasha Ghoneim, reporting from Baghdad, described the bloody unrest as “a continuation” of the events of early October, saying officials had failed to address the exasperation fuelling Iraq’s unfolding political crisis.

“Though the government has in the intervening weeks said it will implement reforms and said the people responsible for killing protesters would be held accountable, that has done nothing to tamp down the anger that people feel,” Ghoneim said.

“People here are living under a crushing amount of poverty… and protesters say they want the government gone,” she added.

‘System has done nothing’

The ongoing turmoil has broken nearly two years of relative stability in Iraq, which in recent years has endured a United States invasion and protracted fighting, including against the Islamic State of Iraq and the Levant (ISIL or ISIS) armed group.

The demonstrations have posed the biggest challenge yet to the year-old government of Prime Minister Adel Abdul Mahdi, who has pledged to address demonstrators’ grievances by reshuffling his cabinet and delivering a package of reforms.

The moves have done little to quell the demonstrators, however, whose ire is focused not just on Abdul Mahdi’s administration but also Iraq’s wider political establishment, which they say has failed to improve the lives of the country’s citizens.

Many view the political elite as subservient to one or other of Iraq’s two main allies, the US and Iran – powers they believe are more concerned with wielding regional influence than ordinary Iraqis’ needs. 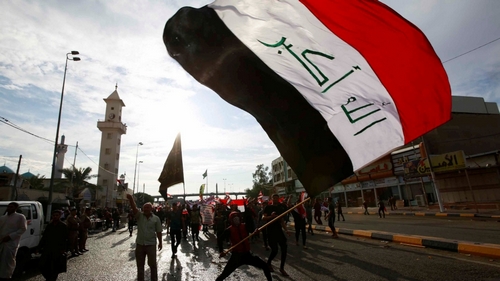 Unemployment, particularly among young people, is a major issue. Millions of people lack access to adequate healthcare, schooling, water or power supplies, and much of the country’s infrastructure is in tatters.

“We want the government to step down and for the political system to be completely revamped,” one protester in Baghdad’s central Tahrir Square told Al Jazeera on Friday.

“The whole political elite needs to change because the current system has done nothing for us,” added the demonstrator, who asked to remain anonymous for security reasons.

The renewed rallies came after Abdul Mahdi on Thursday warned that any collapse of government would drag Iraq deeper into tumult.

In a televised speech, the prime minister also promised people would be free to exercise their right to demonstrate, but stressed that violence at protests would not be tolerated.

His calls were echoed by Iraq’s top Shia leader, Grand Ayatollah Ali al-Sistani, who on Friday urged protesters and security forces to ensure rallies did not spiral into violence.

“Real reform and change in the country has to be through peaceful methods,” a representative of the Muslim scholar said during a Friday sermon in the holy city of Kerbala.

But by afternoon, as the death toll started surging upwards and reports emerged of violent confrontations in Baghdad and cities across Iraq’s south, the mood had shifted.

“Baghdad hurra hurra, fasad barra barra!” the demonstrators chanted – Arabic for “Baghdad is free, corruption is out” – before being driven back by plumes of tear gas, deployed by security forces stationed in the area. 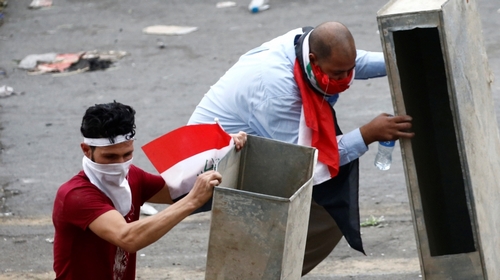 Nearly three-fifths of Iraq’s 40 million people live on less than six dollars a day, according to the World Bank Thaier Al-Sudani/Reuters

Zeidon Alkinani, an independent Iraqi-Swedish political analyst, said protesters were clear in wanting a “country that respects their democratic right and their freedom to express themselves”.

“How can one believe the Iraqi prime minister’s economic reforms if he doesn’t even give them the democratic right to protest,” he told Al Jazeera.

A government-appointed inquiry into the protests earlier this month determined in a report published on Tuesday that security forces had used excessive force and live fire to quell the demonstrations.

What does Israel’s election mean for Palestinian factions?