Palestinian group Islamic Jihad has said one of its commanders was killed in an Israeli air raid on his home in the besieged Gaza Strip, as armed groups responded by firing rockets towards Israel.

Islamic Jihad’s armed wing announced the killing of Bahaa Abu al-Ata in a statement on Tuesday after Israel confirmed it had targeted the 42-year-old commander.

Separately, the Palestinian group said that Israel also attacked the home of one of its political leaders in the Syrian capital, Damascus.

Islamic Jihad said Abu al-Ata’s wife was also killed in the blast that ripped through the building in Gaza City’s Shejaiya district before dawn. At least two others were wounded, according to medics.

The group said Abu al-Ata was killed during “a heroic action”, without elaborating, and promised to take revenge.

“Our inevitable retaliation will rock the Zionist entity,” it said, referring to Israel.

Hamas, the Palestinian group that administers the Gaza Strip, said Israel “bears full responsibility for all consequences of this escalation” and promised that Abu al-Ata’s death “will not go unpunished”.

The Israeli military said Prime Minister Benjamin Netanyahu had authorised the operation against Abu al-Ata, blaming him for recent rocket, drone and sniper attacks against Israel, and attempted infiltrations into the country.

“Abu al-Ata was responsible for most of the Palestinian Islamic Jihad’s activity in the Gaza Strip and was a ticking bomb,” it said, accusing al-Ata of planning “imminent terror attacks through various means”.

Gaza has been under a joint Israeli-Egyptian blockade for more than 10 years, and the freedom of movement for the population of two million has been severely curtailed.

“Israel has not targeted leaders in this way for some time, so this strike is seen here as one which brings significant risks,” he said.

Shortly after the attack, dozens of rockets were launched towards Israel as air raid sirens sounded across southern and central parts of the country, including the commercial capital, Tel Aviv, the Israeli military said.

There were no immediate reports of casualties or damage. Israeli police said they closed some roads on the edge of Gaza as a precaution, while crossing points between Israel and Gaza were also closed. Schools and some ministries in Gaza were also shuttered, Fawcett said.

“Israel is not interested in escalation, but we will do everything required to protect ourselves,” he said. “This could take time. What is needed is stamina and cool-headedness.”

The European Union called for a “rapid and complete de-escalation”.

Mulhaimar Abu Sadaa, a political science professor at Al Azhar University, told Al Jazeera there was likely to be an escalation between Israel and armed groups in Gaza, depending on the behaviour of Hamas.

“The Islamic Jihad is the second strongest military organisation in Gaza, after Hamas, and there is a lot of competition between the two groups. It is not easy to say that Hamas will be able to contain the Islamic Jihad. I think the Egyptians and other international mediators like the UN will probably have to be brought in to contain this cycle of violence.”

“Generally speaking, Islamic Jihad is funded and supported militarily and politically by Iran, so maybe Iran will play a role whether this cycle of violence will be extended or brought to an end soon.”

Many killed in gas unit blast and fire for Pakistan train

Separately on Tuesday, Syrian state media said that Israel launched a missile attack targeting the home of an Islamic Jihad official in the Syrian capital, killing his son and granddaughter.

A Syrian official said Israeli fighter jets fired three missiles towards Damascus one of which was intercepted, while the other two struck the home of Islamic Jihad political leader Akram al-Ajouri in Mezzah, a western district of the city,  according to state news agency SANA.

Al-Ajouri’s son Muath and granddaughter Batoul were killed, the official was cited as saying, while nine others were wounded.

Islamic Jihad said al-Ajouri survived the attack on his home and blamed the “Zionist criminal enemy”. 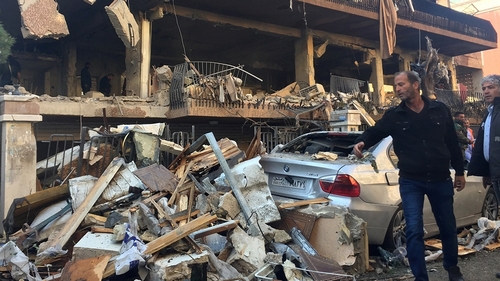 “There has been some criticism in Israeli politics, notably from the Palestinian-Israeli Joint List members, accusing Netanyahu of engaging in this as a desperate last attempt to hold on to power,” Fawcett said.

“Gantz… says that this was the right decision. He has been recommending a tougher response on Gaza for many months.”