Turkish-backed rebels said there were intermittent clashes between the two militaries in recent days south of the town, which Turkey seized from Syrian Kurdish-led forces earlier this month. 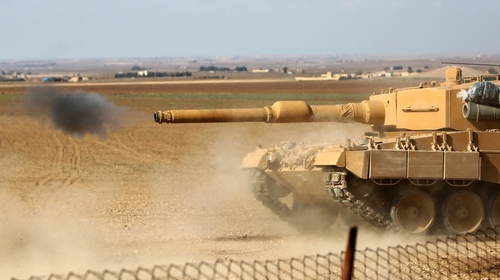 Al Jazeera’s Hashem Ahelbarra, reporting from the border town of Sanliurfa, said thousands of people were fleeing the fighting near Ras al-Ain and Tal Tamr towns.

Turkish-backed Syrian opposition fighters – known as the Syrian National Army (SNA) – launched an offensive and took over areas previously under control of Kurdish fighters south of Ras al-Ain, he said.

“The SNA took over western parts of the town. People have had enough each time someone controls the area and ends up being worse than the previous armed group,” one Tal Tamr resident told Al Jazeera.

“I am concerned for my children, this is why I am leaving. The Syrian army is on the frontline to stop the rebels’ offensive, but you never know.”

On Thursday, American forces patrolled part of Syria’s border with Turkey in the first such move since Washington withdrew troops from the area earlier this month, news reports said.

Five armoured vehicles bearing US flags patrolled a strip of the frontier north of the town of Qahtaniyah, an area they used to operate in before the United States announced its pullout.

Meanwhile, at least eight people were killed on Thursday when a car bomb exploded in a busy market in the northwest Syrian city of Afrin, under control of Turkey-backed rebel groups, witnesses said. The blast also wounded at least 30 people.

The Turkish military helped by its Syrian rebel allies seized Afrin, a mainly Kurdish city, from the Kurdish YPG militia in March 2018 in a major offensive. Turkish forces have since carved out a buffer zone inside northern Syria that extends along most of the countries’ border.

Similar car blasts frequently hit crowded civilian areas in the mainly Arab-populated towns near the border with Turkey under the control of Turkish-backed forces.

Residents and rebels in the rebel-held northwest blame the YPG for the attacks. The Kurdish-led forces say they are engaged in a guerrilla campaign against Turkish forces but deny they target civilians.

The violence underscores the risk of full-scale fighting in northeast Syria resuming after Ankara struck separate deals with Washington and Moscow to push the Syrian Kurdish militia People’s Protection Units (YPG) at least 30km (19 miles) south of the border.

Turkish-backed forces crossed into northeast Syria on October 9 to attack the YPG after President Donald Trump’s abrupt withdrawal of US forces there days earlier, drawing international condemnation of Turkey.

Ankara views the YPG as a “terrorist” organisation because of its links to Kurdish forces in southeast Turkey. It aims to establish a “safe zone” in northern Syria cleared of the armed group.

As part of Turkey’s deal with Russia, Syrian troops have with the agreement of Kurdish forces headed north to take up positions near the border, a region Damascus has not controlled since early on in the country’s eight-and-a-half-year-old war.

In Ankara, President Recep Tayyip Erdogan told politicians from his AK Party that Turkey has information that YPG forces have not completed their pullout despite assurances from Russia on Tuesday they had left before the deal’s deadline.

“Even though the information in our hands suggests this has not succeeded in a full sense, we will give our response to them after our field assessments,” Erdogan said.

“If we see that the members of the terrorist organisation have not been moved out of the 30km or if attacks continue, no matter from where, we reserve our right to carry out our own operation.”

The YPG is the main component of the Syrian Democratic Forces (SDF) that fought for years alongside the US military to defeat the Islamic State of Iraq and the Levant (ISIL or ISIS) in northeast Syria and neighbouring Iraq.

Kurdish forces rejected a call on Wednesday from the Syrian army and police to join their ranks following Turkey’s cross-border incursion.

“The general command of the armed forces is ready to welcome members of SDF units who are willing to join its ranks,” said a defence ministry statement carried by state news agency SANA.

It said all Syrians, including the Kurdish minority, were confronting “one enemy”.

Syria’s interior ministry said it was willing to provide police services to residents of the northeast, calling on members of the Kurdish internal security services, known as Asayish, to join its ranks, SANA reported.

The SDF, the de facto army of the Kurdish administration in northeast Syria, turned down the proposal.

“A unity of ranks must proceed from a political settlement that recognises and preserves the SDF’s special status and structure,” it said.

Joint Russian-Turkish patrols were set to begin on Tuesday 10km (6 miles) inside Syria, but Erdogan said they would now launch on Friday and at a depth of just 7km (4 miles), after a Russian delegation held three days of talks in Ankara seeking cooperation.

“Getting the United States out of Syria was the one big interest Turkey, Russia, and Iran had in common,” said Nicholas Danforth, a senior visiting fellow at the German Marshall Fund.

“But now Russia’s long-standing support for restoring the Syrian regime’s sovereignty will come into direct conflict with Turkey’s desire to protect its interests and territory in northern Syria,” he said.

Russia has been Syrian President Bashar al-Assad’s most powerful international backer, while Turkey has supported rebels who fought for years to overthrow him.

Some 300,000 people have been displaced and 120 civilians killed since Turkey’s incursion, according to the Syrian Observatory for Human Rights, a UK-based war monitor.

In Geneva, al-Assad’s government condemned what it called the occupation of its land while the Syrian opposition demanded justice at the opening of a UN-backed panel meant to usher in reconciliation, political reform, and free-and-fair elections as a basis for lasting peace.