After an estimated 18,000 birds are found dead along an Indian saltwater lake in the western state of Rajasthan, experts said they suspect avian botulism to be the cause.

Migratory birds such as plover, shoveller, teal and mallard were the worst affected in the incident, which, according to experts, was unprecedented in India’s wildlife history.

According to local officials, tourists on November 10, while visiting Sambhar Lake – situated 80km (49 miles) southwest of Rajasthan’s main city of Jaipur – noticed thousands of dead birds along the shore.

Till now, the carcass of more than 18,000 birds have been picked up, identified and buried, but experts said the toll could cross 25,000 since the casualty towards the Nagaur side of the lake is yet to be added.

More than 500 workers of the state’s animal husbandry department have been deployed to collect the carcass of the birds after photos of the dead birds went viral on WhatsApp groups of local tourists.

Since the shoreline extends to more than 58km (36 miles), authorities said they were still collecting the carcasses. 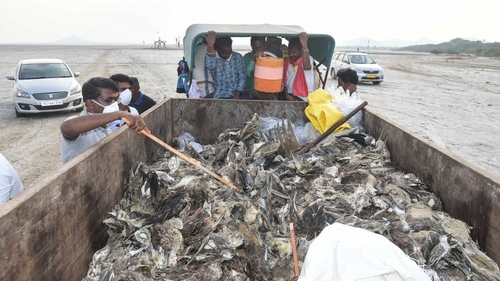 ‘No one was prepared’

Joy Gardner, who heads Hope and Beyond, an NGO that rescues and rehabilitates birds in Rajasthan, has set up a rescue centre at the Sambhar Lake.

“No one was prepared for death of this magnitude. It has never happened in the past,” Gardner told Al Jazeera.

“A total of 550 birds have been rescued… When we came here on November 11th, we noticed a lot of birds were struggling,” he said.

Gardner said the worst affected were the birds from Siberia who mainly migrate to two wetland sites in India – the Sambhar Lake and the Keoladeo National Park in Bharatpur, also in Rajasthan.

Both places have been declared Ramsar sites, which refer to the wetland sites of international importance and are named after Iran’s Ramsar city where the Convention on Wetlands was signed in 1971 for the preservation of wetland bodies in the world.

Gardner said the birds fly to the two Indian sites in October when their habitat in Siberia is covered with snow and there are no water and food sources. They leave before the onset of summer. 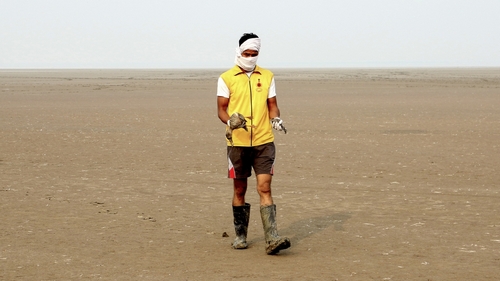 In this photo taken on November 16, 2019, a worker walks as he holds dying birds in his hands at Sambhar Lake File: Himanshu Sharma/AFP

Shailesh Sharma, a director in Rajasthan’s animal husbandry department, told Al Jazeera by telephone from the Sambhar Lake site that four of the eight government labs, which collected samples have submitted their reports.

A report by a state-run university in Rajasthan suggested avian botulism as the cause of the mass deaths.

“On the basis of history, epidemiological observations, classical clinical symptoms and post-mortem findings, the most probable diagnosis is avian botulism,” said the report by the Rajasthan University of Veterinary and Animal Science.

“The clinical signs exhibited by affected birds included dullness, depression, anorexia, placid paralysis in legs and wings and neck touching the ground. The birds were unable to walk, swim or flight,” it added.

Officials said they are waiting for a detailed report from the Indian Veterinary Research Institute as well as a report from a southern Indian laboratory to determine the cause of the deaths.

Sharma said the marshy ecosystem of the lake as well its long shoreline had made it difficult to collect the carcasses or rescue the affected birds.

“But we are using our total strength of manpower to collect, identify and bury the carcass. We have deployed over 30 doctors and 400-500 staff in this work,” he said.

Major avian botulism epizootic has been reported in North America for more than a century, with the disease killing millions of waterfowls in California and Utah in the United States in 1910.

The latest such outbreak was reported from Utah in 1997, when more than 500,000 birds were killed, according to a field manual for wildlife diseases prepared by the Rajasthan government.