“Last night, the United States brought the world’s number one terrorist leader to justice,” US President Donald Trump announced at the White House on October 27. “Abu Bakr al-Baghdadi is dead.” 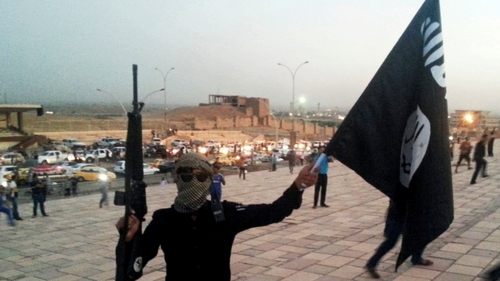 A fighter of the Islamic State of Iraq and the Levant holds an black flag and a weapon on a street in the city of Mosul, Iraq June 23, 2014 Reuters

Trump appeared jubilant as he shared with the American public the details of the operation that led to the killing of the infamous leader of the Islamic State of Iraq and the Levant (ISIL or ISIS). He used the news of al-Baghdadi’s demise, which came only a few weeks after his controversial decision to pull US troops out of Syria, to prove to the world that his administration’s policies in the country are working and the war against ISIL has been won.

Al-Baghdadi’s death, however, is unlikely to help Syrians like me, whose loved ones have been abducted and imprisoned by the group. Since its establishment in April 2013, ISIL detained at least 8,143 individuals across Syria. Today, after the group was pushed out of most parts of Syria and its leader killed, the fates of these people remain unknown.

My sister and best friend, Samar, 31, is one of these missing people.

Samar was in Cairo studying for a master’s degree in archaeology in 2011 when the Arab uprisings broke out across the Middle East, including in our home country, Syria. As an energetic student who believed in human rights, she used every break she had from her studies to return home. She helped organise protests against the regime and volunteered to work with internally displaced people streaming into Aleppo as fighting between regime and rebel forces intensified in its countryside.

In August 2013, she was walking with her fiance and our mother in our hometown of Atarib in northwest Syria, when four masked men grabbed her and dragged her into their car. Later, her kidnappers used her phone to log into her social media accounts and told us that they are ISIL members; they threatened us that we will also meet a similar fate.

We believe Samar, like many others, was targeted simply for trying to fight for the most basic rights and freedoms for her people in an area where ISIL was active.

I have been denied the opportunity to walk, eat, chat and laugh with my sister for more than six years, but I refuse to be denied justice for her abduction. I want those who snatched her from me to stand trial and answer for what they did to my sister and my family. I believe only when we achieve justice for our missing loved ones can we say the war against ISIL has been won.

But to achieve justice for my sister and thousands of others like her, the body of evidence that ties specific ISIL members to abductions and unlawful detentions needs to be processed and preserved. Mass graves, former detention centres and ISIL camps must be combed through for evidence by specialist teams, with the findings communicated to the relevant authorities.

Despite the self-congratulatory declarations by US officials announcing the “end of ISIL”, none of this is happening. Mass graves found in areas previously held by ISIL are being exhumed without the supervision of experienced investigators and trained forensic analysts who can guarantee evidence is properly preserved and used efficiently to identify victims and support accountability.

Former detention centres are also not being treated with care. Physical evidence found in these facilities that can help identify victims, such as clothes and toys, are being destroyed, as well as ISIL’s records on the prisoners. Even the walls, on which the detainees painstakingly scratched their names and thoughts, are being painted over.

The US has been offering some limited support to local teams, but thanks to Trump’s decision to withdraw US troops from Syria, there is now an increased risk of vital evidence being destroyed or falling into the hands of Bashar al-Assad’s regime.

Moreover, recent jailbreaks by ISIL fighters in Syria mean individuals who potentially hold vital information on the fates of our missing loved ones have managed to avoid punishment and further interrogation.

Meanwhile, there are plans for foreign ISIL fighters who are currently detained in Syria to be sent to Iraq, where they would likely be imprisoned or executed, rather than being repatriated to their home countries to face trial. There may, therefore, not be any proper investigation into the crimes these people committed or collection of information about the people they imprisoned or killed.

Syrians who believe in freedom and democracy have been fighting against al-Assad’s brutal regime on the one hand and the extremist ideology of ISIL on the other for years. Today, as global powers try to wash their hands of the mess they created in our country, we continue to struggle for justice and accountability.

I still want to see every person who contributed to our suffering, from the enforcers of the Syrian regime to the ISIL fighters, held to account. At the very least, I want to learn what happened to my sister.

If she has been killed, I want to know how she spent her last moments.

If she is alive, I want to find her and bring her back to our family.

Some people speculate that she may have been passed onto another extremist group or handed to regime forces. Others suggest she is being held in the ISIL camps in northern Syria. Whatever the case, whatever her fate might have been, I want to know, and I have the right to know.

The international community and the global powers that are active in our country have repeatedly failed us in our fight for justice. All, however, is not lost. We can still get the investigations on track, enforce procedures that would guarantee the preservation of evidence when dealing with mass graves, former detention centres and ISIL camps. We can make sure ISIL fighters who are currently in custody are properly interrogated to reveal what they know about the missing and the dead.

We can still reunite some families and help others find closure by finally informing them of the fates of their long lost loved ones. To achieve this the international community needs to act swiftly and demand the relevant authorities make investigating the missing ISIL abductees a priority.

Families of missing people continue to suffer ISIL’s oppression not knowing the fate of their loved ones. We cannot declare the “end of ISIL” until justice has been served.