Phnom Penh, Cambodia – The deputy leader of Cambodia’s opposition party has been denied entry to Thailand, casting doubt on party leader Sam Rainsy’s pledge to return from exile in Paris in early November.

Cambodia National Rescue Party (CNRP) Vice-President Mu Sochua was denied entry in Bangkok on October 20 and sent back to Kuala Lumpur in Malaysia. From there, she headed to the United States, where she is also a citizen.

“I made it all the way to the biometrics, the fingerprint. The guy looked at the screen, then looked at me and pushed a button. And I knew that was it,” Sochua said in an interview with Al Jazeera.

Sochua said the immigration officials who detained her were “extremely polite”.

Thai immigration authorities did not respond to requests for comment, but a document viewed by Al Jazeera showed that Sochua was rejected for “having behaviour which (was) possibly harmful” to Thai society.

Sochua and CNRP co-founder Sam Rainsy – who has remained abroad since 2015 to avoid charges – pledged to return to Cambodia by land on November 9. They said they would rally thousands of supportive Cambodian migrant workers to come from Thailand with them.

It is the third time this year Rainsy has set a deadline for his return, and the government has responded by arresting dozens of supporters across the country, accusing them of plotting a coup. Hun Sen has also threatened to deploy the armed forces.

A spokesman for Cambodia’s Ministry of Foreign Affairs told pro-government media Sochua was “blacklisted” from Thailand after the Cambodian government claimed it would issue arrest warrants to all ASEAN countries.

“Hun Sen would be satisfied by that much cooperation from Thailand while it can ensure no disruption to Cambodian labour employed in its economy,” Mong Hay said.

“By refusing her entry but not arresting her, Thailand is trying to avoid getting in the middle of this dispute, and telling the Cambodians to take their political problems somewhere else” says @hrw about refusal to allow @sochua_mu to enter country. https://t.co/4NmA0Oy1kD

However, Mong Hay said Rainsy’s inability to enter the country could actually help him.

“That Thai wall obstructing his return could enhance further Sam Rainsy’s stature and popularity just as Iranian political and cleric Ayatollah Khomeni gained while in exile in France before returning triumphantly in 1979,” Mong Hay said, adding that Rainsy remained a “phenomenon” and a “force to reckon with” for Hun Sen.

Ear Sophal, a Cambodian-American associate professor of diplomacy and world affairs at Occidental College, agreed that any reputational damage to Rainsy would be minimised if he genuinely tried to return.

“He’s got to get close and he gets an A for effort at least,” Sophal said via email.

Some are not so less generous.

Kem Sokha’s own daughter has slammed the planned return as a “PR stunt” and a “gimmick”.

“There is no real plan for any senior CNRP official to return to Cambodia on November 9,” Kem Monovithya, also a party official, told local media. 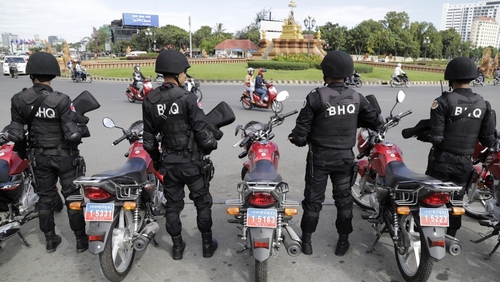 Cambodian police officers stand guard near the National Assembly ahead of the official opening session of parliament after controversial elections in which the opposition party was banned. Hun Sen has resumed a crackdown on critics. Mak Remissa/EPA

Whether the desire is genuine or not, the journey is looking increasingly difficult.

Sophal said entering through Laos or Vietnam was “not really” an option, but said Rainsy and Sochua could potentially return by air, from South Korea.

The CNRP, however, has long insisted the senior politicians will cross by land.

While Sochua pointed out she has been granted entry to Thailand “many, many, many times” in the past, Sophal said the situation appeared to have changed.

“Thailand cooperated because they don’t want trouble from Hun Sen and they made the calculation that it’s better to deny her entry, a US Citizen no less,” Sophal said, adding that because the date of return is well-known and impending, Thailand was more cautious than in the past.

But Sochua said some party leaders were already in Thailand, and that she and Rainsy were committed to returning to Cambodia by land, through Thailand.

The issue is being discussed with Thai authorities “through many channels,” she said.

“We will still book our tickets to go through Thailand. It’s not over yet.”