New Delhi, India – More than 2,500 forest dwellers fearing eviction from their lands held a demonstration in the Indian capital on Thursday, days before the Supreme Court begins a final hearing of their case. 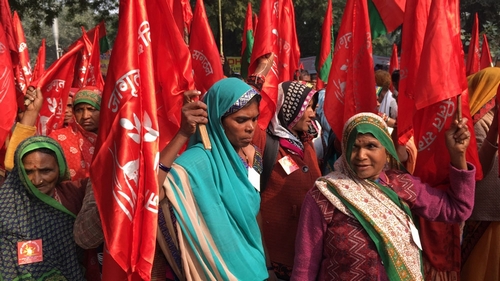 “We have come to New Delhi to ensure that our voice is heard by the Supreme Court, so that it doesn’t end up doing a historical injustice,” Baham Saste, a 48-year-old farmer from Badwani district in the central state of Madhya Pradesh, told Al Jazeera on Thursday.

Some protesters, barely a stone’s throw away from India’s parliament, carried bows-and-arrows and raised slogans against the government: “We have fought and we have won. We will fight and we will win.”

In February this year, India’s Supreme Court ordered the eviction of more than a million forest dwellers after their land claims were rejected, and directed 21 states to file affidavits with details on how they had processed those claims.

The forest dwellers, a majority of whom belong to the indigenous tribal communities, claimed their ownership of the forest lands under the landmark Forest Rights Act (FRA).

Passed in 2006 by the previous government, the law recognised the right of nearly 150 million people to inhabit and live off about 40 million hectares of India’s forest land.

Nearly 104 million of those people are tribals, constituting close to 10 percent of India’s 1.3 billion people.

The forest dwellers said they were protesting against any possible dilution of the FRA by the ruling Bharatiya Janata Party (BJP) government, which has been accused of turning a blind eye to the issue.

Ashok Choudhary of the All India Union of Forest Working People

Saste, who travelled for more than 24 hours to reach New Delhi, said the forest department in his district, had been threatening them with dire consequences if they didn’t give up claim on their traditional lands.

“The electricity in our village has been disconnected so that we leave our land. Where will we go? This is our forefathers’ land and its rights should be given to us. We need our rights be protected,” he said.

“The government is not with us otherwise the Supreme Court would not have passed such an order.”

Following the Supreme Court order, rights groups had questioned the government’s commitment to the forest dwellers after the federal lawyers failed to appear before the court to appeal the decision.

The order was in response to petitions against the FRA, filed by some environmental groups and retired forest officials who said the law led to a fragmentation of forests, threatened biodiversity and caused deforestation.

The judgment said the tribals and other forest dwellers, whose claims of individual or community forest rights, were rejected by the states’ forest department had to be displaced from their traditional habitats.

In response, at least 16 Indian states rejected 1.3 million claims by the forest dwellers, leading to massive protests across the country and forcing the court to put a stay to its order.

The court then directed the states to specify whether due process was followed in rejecting the claims. It specified that the forest department could not initiate any eviction process if the move could trigger social tensions in the area.

However, activists representing the forest dwelling communities claim that there have been instances where homes and farm lands of these people were destroyed in a bid to evict them from the forests.

Sahdev Tudu, 38, from Dhenkenal district in the eastern state of Odisha, said forest officials do not allow the villagers to enter the forest area.

“The government of India seems to have given its consent to allow 1.3 million tribals to be evicted. This is our land and if need arises, we will organise and agitate,” he told Al Jazeera.

“This protest is just a warning to the government and the Supreme Court that our eviction will lead to mass agitations across the country,” he warned.

Ashok Choudhary of the All India Union of Forest Working People said the FRA acknowledged the centuries-old injustices committed towards the tribals and other communities dependent on forests.

He said the forest dwellers had gathered to protest why the FRA provisions were not being implemented despite it being passed 13 years ago.

“Ever since the Narendra Modi government came to power, efforts are being made to dilute this historic legislation passed by the parliament instead of protecting it,” he said.

“This government is trying to divert lands to big corporations that have set their eyes on the rich mineral resources of these forests… The government is finding ways to evict these people to do that,” he added.

Meanwhile, reports said at least seven of the 21 states had told India’s tribal affairs ministry that due process was not followed in rejecting the claims of the forest dwellers.

The admission by the states validates the allegations made by the protesters and could have an impact on the final verdict of the court.

Sudhanshu Mittal of the BJP denied that the Modi government was diluting forest rights, saying the activists were making “wild allegations” against the government.

“To suspect the government motives undermines the democratic values of India. The BJP government is doing everything to protect rights of all its people including those of forest dwelling communities,” he told Al Jazeera.