Demonstrators gather at a protest during a curfew, two days after the nationwide anti-government protests turned violent, in Baghdad Thaier Al-Sudani/Reuters

In a statement quoted by local media on Thursday, Abdul Mahdi’s office said the prime minister was “continuing contacts” with protesters in a bid to end the political crisis and “return to normal life”.

Abdul Mahdi was prepared to meet with “representatives of peaceful demonstrators to consider their legitimate demands”, the statement added.

The announcement came as 4,000 protesters rallied in the Baghdad, defying a government-enforced curfew to call again for improved services, more jobs and an end to widespread corruption.

The crowds gathered in Baghdad’s Tayaran Square and attempted to march onto the central Tahrir Square only to be met with open fire and heavy tear gas. Police also used live ammunition in the Zafaraniya district of Baghdad and there were protests in the northwestern Shula district.

The demonstrations, which appear to be independent of any political party, started in the capital on Tuesday, and later spread to cities across Iraq’s mainly Shia south. At least 19 people have been killed in three days of clashes, according to the Iraqi High Commission for Human Rights.

Those demonstrating have directed their anger at Abdul Mahdi’s year-old government and a wider political class they accuse of being corrupt and doing nothing to improve their lives. 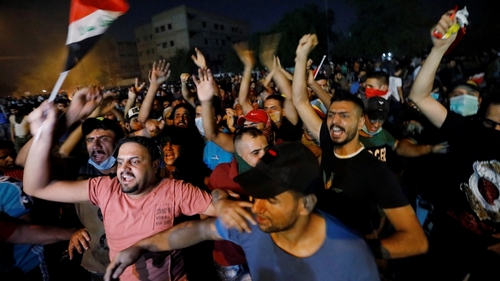 Al Jazeera’s Imran Khan, reporting from Baghdad, said the protests “pose the biggest challenge yet to Abdul Mahdi, but it’s unclear how he can stop the outpouring of anger against his rule, with no apparent leaders of protesters to negotiate with.”

Several Iraqis said they received on Thursday text messages from Abdel Mahdi’s office giving a number for a hotline that protesters could call to air their grievances.

Iraq has the world’s fourth-largest reserves of oil, according to the IMF, but much of its population of 40 million lives in poverty and without decent healthcare, education or power and water supply.

“I’ve got nothing but 250 lira (20 US cents) in my pocket while government officials have millions,” the 22-year-old added.

In addition to imposing curfews, Iraqi authorities have also cut internet access in the capital and across much of the country.

The measures appear to have done little to stymie the unrest, however.

In addition to the 19 people killed, at least 1,041 people have been wounded and 62 others arrested, according to the Iraqi High Commission for Human Rights.

More than half of those killed in the last three days have been in the southern city of Nasiriya. 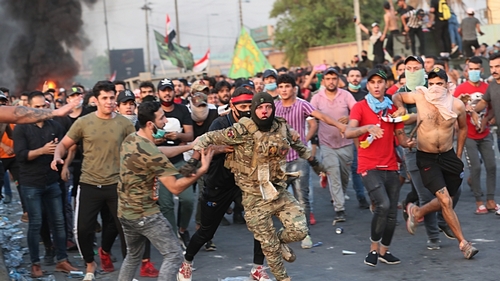 Anti-government protesters help a soldier from the Federal Police Rapid Response Forces to get out of the protest site area after other protesters beat him, in Baghdad Hadi Mizba/ AP

The AFP said a total of 30 people have been killed, with six protesters shot dead in Nasiriya on Thursday and four killed in nearby Amara. The agency said two protesters and one police officer was killed in Diwaniyah, a town south of Baghdad.

The Associated Press, meanwhile, put the death toll at 33. Al Jazeera could not independently verify those figures.

Curfews were in place in Nasiriya, Amara, Najaf and Hilla on Thursday, according to Reuters.

“It saddens me and breaks our hearts the injuries among the protesters, our sons, and the security forces and the destruction and looting of public and private properties,” he wrote.

“We stress to the people of our nation that our priorities were and will remain focused on providing radical realistic solutions to many of the decades-long accumulated problems.” 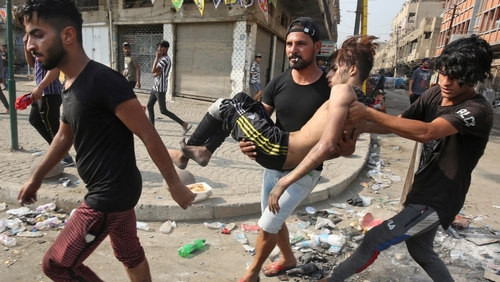 The killings have drawn international concern, with Amnesty International calling on Iraq’s government to rein in the security forces and investigate the killings.

“It is crucial that the authorities ensure a fully independent and impartial investigation,” Maalouf added. “The state must commit to holding those responsible to account.”

The United Nations meanwhile urged the government to “exercise maximum restraint” and allow peaceful protests. The United Kingdom and the European Union have also appealed for calm.

Iraq has struggled to recover since defeating the Islamic State of Iraq and the Levant (ISIL or ISIS) group in 2017.

The country’s infrastructure has been laid to waste by decades of sectarian civil war, foreign occupation, two United States-led invasions, UN sanctions and war against its neighbours.

Who are south Yemen’s separatists?