Iraq’s president has promised to hold a snap parliamentary election once a new law is passed and said the country’s beleaguered Prime Minister Adel Abdul Mahdi has agreed to step down if a replacement was found.

The announcement by President Barham Salih on Thursday came as Iraq’s political leaders are scrambling to produce a solution to mounting protests calling for economic reform, a government overhaul and an end to the country’s quota-based power-sharing system.

“The prime minister announced that he accepted to submit his resignation if parties agree on an adequate alternative within the context of the constitution and the law to avoid a constitutional gap,” Salih said in a televised addressed.

“I am personally meeting and consulting with the various parties and blocs to achieve reforms within the context of the law to maintain the security of Iraq.”

He added that a new electoral law will be presented to Parliament next week. 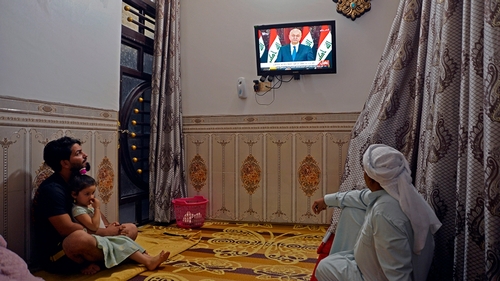 The remarks came days after powerful Shia religious leader Muqtada al-Sadr, who leads the largest bloc in Iraq’s Parliament, supported protesters’ calls for an early election. It was unclear whether they would meet the demands of the protesters.

Al Jazeera’s Natasha Ghoneim, reporting from Baghdad, said it appeared there remained a “significant gap” between what demonstrators had been asking for and “what the current government is willing to offer”.

“The protesters have said that what they want is for Mahdi to resign now and then elections to be called in 60 days, supervised by the United Nations, to ensure that they will be free and fair,” Ghoneim said.

“And what they heard this evening from the president was a ‘yes, but’,” she added, citing Salih’s failure to provide a timeline for when a successor to Abdul Mahdi will be named or elections will be held.

Abdul Mahdi came to power just a year ago after as a compromise candidate between al-Sadr and main political rival Hadi al-Amiri, who heads a coalition of Iran-backed Shia militia leaders. Earlier this week, al-Sadr and al-Amiri agreed to work to remove Abdul-Mahdi from office.

The prime minister had previously offered a range of concessions – including a cabinet reshuffle and a package of reforms.

The measures have failed to appease protesters, however, who on Thursday took to the streets across Iraq for a seventh successive day.

Thousands of protesters thronged the centre of the capital, Baghdad, in a show of fury at a political elite they see as deeply corrupt, beholden to foreign powers and responsible for mass unemployment as well as shambolic public services.

“We want a total change of government, we don’t want one or two officials fired and replaced with other corrupt ones. We want to completely uproot the government,” Hussein, who did not give a last name, told Reuters news agency in Baghdad’s Tahrir Square.

“They think we will protest for one or two days then go home. No, we are staying here until the government is uprooted,” he added.

Others called for Iraq’s religious leaders to step away from politics, too.

“We don’t want them, so let them leave. We also don’t want the clerics – they have no business in politics,” Hoda, a 59-year-old, told AFP news agency. 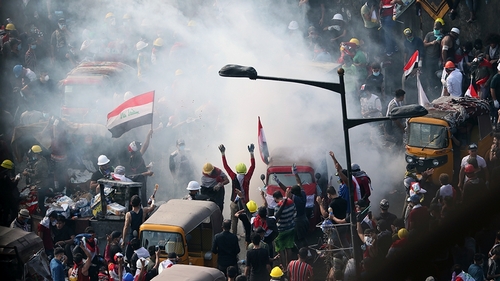 More than 250 people have been killed and thousands of others wounded since the protests erupted, with security forces using tear gas, rubber bullets and live ammunition against those taking to the streets.

Protesters’ ire is focused on Iraq’s entire political establishment, which many say has failed to improve the lives of the country’s citizens despite a period of relative calm ushered in following the defeat of the Islamic State of Iraq and the Levant (ISIL or ISIS) armed group two years ago.

Many view the country’s officials as subservient to one or other of Iraq’s two main allies, the United States and Iran – powers they believe are more concerned with wielding regional influence than ordinary Iraqis’ needs.

Millions lack access to adequate healthcare, education, clean water and electricity, with much of the country’s infrastructure in tatters.