The United Arab Emirates and Saudi Arabia have recently sent clear signals that they are ready to settle the Yemen conflict and their war with the Houthi insurgents. On November 10, Anwar Gargash, the UAE’s minister of state for foreign affairs, said that the Houthis are a part of Yemeni society and should have a role in its future. His statement came on the back of the UAE withdrawing its last forces from Aden and amounted to a declaration that Abu Dhabi has reconciled itself to the reality that Yemen’s conflict cannot have a military solution. 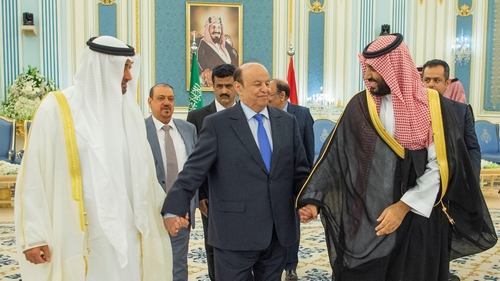 Mohammed bin Zayed, Mohammed bin Salman and Abd-Rabbu Mansour Hadi hold hands after the signing of a deal between Yemen’s government and southern separatists in Riyadh on November 5, 2019 Reuters

Saudi Arabia, too, is moving in the direction of de-escalation with the Houthis. Saudi officials and Houthi representatives are reported to be holding behind-the-scenes indirect talks mediated by Oman. It is hard to judge how fruitful such negotiations will be, since an earlier attempt in 2016 failed to bring peace. But the mere fact that the talks are taking place is a positive sign.

If allowed to bear fruit, the Saudi-Houthi negotiations could alleviate the dire situation in Yemen today. According to a recent report by the Armed Conflict Location and Event Data project (ACLED), over 100,000 Yemenis have died as a result of the Saudi-led intervention in 2015. Two-thirds of the civilian deaths caused by direct military action (around 8,000) have been the result of coalition air strikes. The Houthis also bear a responsibility for about 2,000 civilian casualties from direct targeting.

Without a political solution to the conflict, the humanitarian disaster in Yemen will continue to worsen and remain a source of instability not only for Saudi Arabia but for the entire Arabian Peninsula.

Beset by the disarray among supposed allies in Yemen, Saudi Arabia found its efforts to defeat the Houthis and restore President Abd-Rabbu Mansour Hadi’s legitimate authority to Sanaa ineffective and inconsequential. In fact, intra-factional conflicts between Hadi, the secessionist Southern Transitional Council (STC), and different tribal and regional groups derailed fighting against the Houthis in the interior of the country.

The southern city of Aden was reclaimed from the Houthis in 2015 with a pivotal intervention by Emirati forces; they were also instrumental in the painfully slow conquest of the Red Sea coast up to the city of Hodeidah.

But in July, the UAE announced its withdrawal from Yemen which threw the entire Yemeni arrangement into a tailspin. In August, the STC took over Aden which resulted in clashes with forces loyal to President Hadi and threatened to end all ground operations against the Houthis.

Meanwhile, political changes in Sudan – a member in the Saudi-led coalition in Yemen – following the ouster of President Omar al-Bashir in April and the formation of a civilian government forced the gradual withdrawal of some 10,000 Sudanese troops fighting in the country, thus depriving the war effort of much-needed ground forces.

Crucially, the Houthi attack on ARAMCO facilities in September convinced Saudi leaders that continuing the war was fruitless since more than four years of it had not dented the insurgents’ military capabilities.

Such conditions and developments necessitated a new Saudi approach to the chaotic situation in Yemen. King Salman and Crown Prince Mohammad bin Salman’s (MBS) legacies and fates have become intricately tied to Yemen. An unmitigated failure could be catastrophic for their rule.

By now, it is clear that the success of MBS’s flagship programme for economic diversification and social change at least partially depends on how and when the kingdom disengages from its military commitment to the war on its southern border.

Given these realities, Saudi Arabia appears to have chosen to fully take hold of the Yemen issue and do away with dissipated efforts. It is still too early to judge how effective it will be. But given past failures and missed opportunities, Riyadh cannot lose any more time in both extricating itself from the Yemeni conflict and helping the devastated country stand on its feet.

It is hard to imagine that Saudi Arabia was unaware of, or happy with, how the UAE conducted itself in southern Yemen. Abu Dhabi supported the STC despite the latter’s drive to establish an independent state in the south.

Indeed, the STC behaved as if it were the de facto sovereign power in the area while Hadi and his government were shunned and disallowed from conducting state business from Aden, the interim capital. Riyadh, which considers that a divided Yemen is a security and strategic threat to its stability, did not sanction separatist posturing but did little to curb it, until the situation got out of control.

The STC’s takeover of Aden in August alarmed Saudi officials who feared a “civil war within a civil war” and the dangerous breakup of the Yemeni anti-Houthi camp. When Emirati forces bombed Hadi’s troops in support of the STC, Hadi appealed to Saudi Arabia for help against “an armed rebellion” supported by the UAE’s arsenal. In October, following a fraught period of uncertainty, Saudi troops finally took over Aden, in the process ending the STC’s putsch and preserving its own reputation as the main supporter of Hadi’s internationally recognised authority and government.

The Saudi takeover of the southern city paved the way for the signing on November 5 of the Riyadh Agreement between Hadi and the STC which contained the principles of a Saudi-sponsored accommodation. While maintaining Hadi’s supremacy in any future political system, the agreement gave the STC a major political and administrative role and put all military and security forces under the command of the ministries of defence and interior, respectively.

In essence, Saudi Arabia presided over a power-sharing agreement that keeps Yemen unified but gives voice to those asking for some autonomy. Most importantly, however, the Riyadh Agreement gave Saudi Arabia a condominium over Yemen and practically made it responsible for any future developments in the country.

Once it stabilised the situation, Riyadh began negotiating with the Houthis to de-escalate the conflict and eventually end it. This has been preceded by other communications over the last two months. What gave impetus to these developments was the Houthis’ declaration on September 20 of a truce with Saudi Arabia and a pledge not to use drones against Saudi targets.

But all this could be derailed because of the worrisome absence of the Hadi government from the Oman talks. This could send unwarranted messages that Yemen is a mere protectorate of Saudi Arabia and that the Houthis have ascended to the status of a negotiating partner while Hadi is relegated to the position of a satrap.

Is peace within reach?

It is too early to judge whether Yemen is indeed approaching a state of peace following years of war and its attendant calamities. But efforts to address past failures are an encouraging sign that the different political forces in the country appear convinced of the need for a political solution. It is also encouraging that Saudi Arabia seems ready to eschew the old and tired policies of looking at Yemen as merely an arena for countering Iranian influence on the Arabian Peninsula.

Indeed, Yemen’s problems have always been more an outcome of authoritarian rule, absence of good governance, corruption, and elite competition than of Iranian interference. Iran is a newcomer onto the Yemeni scene, ushered in by developments which it did not precipitate.

Saudi Arabia today has a coveted opportunity to be a good deal maker and secure Yemen’s domestic peace and its own stability. The future of its relations with Iran depends on many factors of which Yemen’s war is only a small part.