Gotabaya Rajapaksa was on Monday sworn in as the Sri Lankan president a day after he was declared the winner in the closely fought election in the South Asian island nation.

Rajapaksa, who is the first retired military officer to assume the top office, appealed to minority Tamils and Muslims – who form about 20 percent of Sri Lanka’s 22 million population – to rally around him.

Chief Justice Jayantha Jayasuriya administered the oath of office to Rajapaksa at the 140 BC Ruwanweli Seya Buddhist temple in the ancient kingdom of Anuradhapura in north-central Sri Lanka.

In his address to the nation, he also pledged to give national security priority and follow a neutral foreign policy.

“The main message of the election is that it was the Sinhala majority vote that allowed me to win the presidency,” the 70-year-old leader later told AFP news agency.

“I knew that I could win with only the votes of the Sinhala majority. But I asked Tamils and Muslims to be a part of my success. Their response was not what I expected. However, I urge them to join me to build one Sri Lanka,” he said.

“He has a huge task in lifting the Sri Lankan economy out of doldrums,” Al Jazeera’s Minelle Fernandez, reporting from Anuradhapura, said.

Fernandez said that the “debt repayment is quite crushing”.

“Sri Lankans are looking forward to the same efficiency of management, as many people we spoke to pointed out, the way Gotabaya ended the war. They are hoping that he approaches the economy and other issues with the same single-minded drive. And he produces results.”

The 70-year-old leader popularly known as Gotabaya campaigned on the plank of security and economic revival. He has promised to fight corruption and make Sri Lanka safe seven months after deadly Easter Sunday attacks blamed on Muslim groups.

The April attacks on churches and hotels left more than 250 dead and hit the tourism sector – a major revenue earner – hard, and it was one of the main election issues.

Gotabaya Rajapaksa is the younger brother of former President Mahinda Rajapaksa, and the two nationalist leaders had given the military a free hand to crush the Tamil separatists and end a 26-year civil war in 2009.

The Rajapaksa brothers are popular with the Sinhalese majority and the powerful Buddhist clergy.

A former lieutenant colonel in the army, Rajapaksa plans to rebuild the security arms of the state, including its intelligence cells and surveillance networks that he says the outgoing administration dismantled under international pressure.

Return to a security state?

That has raised fears of a return to a security state which Rajapaksa created to fight the Tamils, one that could be directed against Muslims who have faced hostility from hardline Sinhalese Buddhists ever since the attacks, say experts.

“Sri Lanka’s Muslims are among those most fearful of a Gotabaya presidency,” said Alan Keenan, project director for Sri Lanka at the International Crisis Group. 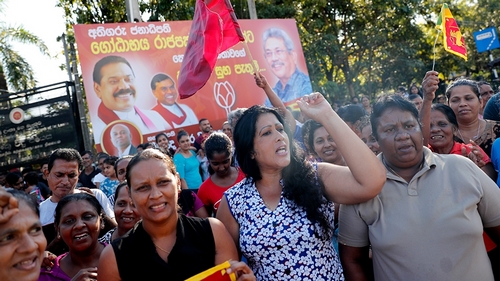 In his first comments following his election victory, Rajapaksa said he would carry all his countrymen with him in the new Sri Lanka he has planned to build.

A former lieutenant colonel in the army, Rajapaksa is reputed to be a decisive leader who gets things done, whether it is finishing the war against Tamil rebels or developing the capital Colombo.

Rajapaksa has been dubbed as the “Terminator” by even his own family, and critics say the 70-year-old leader should be tried for war crimes over allegations of killings, torture and forced disappearances during the final stages of the war against the Tamil rebels in 2009.

He also faces a civil suit in the United States for allegedly ordering the torture of a Tamil man and several others when he was the defence secretary.

Another civil action against him in a US court in connection with the death of an anti-establishment newspaper editor in Sri Lanka in 2009 was rejected on the basis that Gotabaya had “foreign official immunity”.

He has brushed aside war crime allegations.

As president, he has offered voters technocratic, military-style governance led by professionals rather than politicians.

Rajapaksa, an avowed Buddhist and vegetarian, left the army in the 1990s and moved to the US where he worked in information technology.

This year he applied to renounce his US citizenship since Sri Lankan law does not allow candidates with dual citizenship to run for president.

When asked about rights abuses during his time as defence secretary he said, during the campaign last month: “You’re talking about the past all the time, let’s talk about the future.”