Dhaka, Bangladesh – Thousands of university students on Monday staged protests in the Bangladeshi capital Dhaka and Rajshahi city after an undergraduate student was allegedly killed by activists of Chhatra League – the student wing of the ruling Awami League party.

Abrar Fahad, 21 – a student at the prestigious Bangladesh University of Engineering Technology (BUET) – was allegedly killed over his Facebook post critical of Bangladesh’s recent water-sharing agreement with India.

Dhaka and New Delhi have for decades struggled to ink a deal on sharing river waters. A controversial agreement on sharing water of Ganga river has long been seen in Bangladesh as a treaty which favours India.

My son was just an innocent student. He had his own strong opinions and he was killed for that.

“He was killed because of some of his Facebook posts. That is insane,” one of Abrar’s classmates, who preferred to be unnamed, told Al Jazeera.

“The goons of Chhatra League killed him. We want justice,” he said. 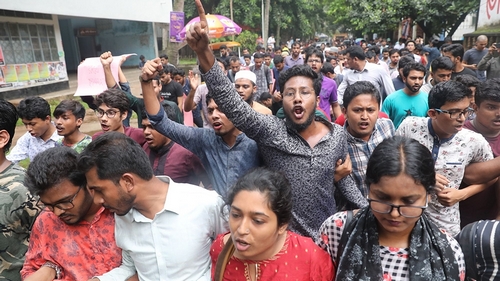 Barkat Ullah, 57, Fahad’s father said: “My son was just an innocent student. He had his own strong opinions and he was killed for that.”

Several classmates of Fahad and the residential students of Sher-e-Bangla hall, who spoke to Al Jazeera, have pointed fingers of blame at Chhatra League activists for Fahad’s killing.

According to an autopsy report by doctors at Dhaka Medical College Hospital, Fahad died of “internal bleeding and excessive pain” as he was badly beaten up by blunt objects such as cricket stumps or bamboo sticks.

Protests were also organised in Rajshahi city where students blocked major roads. Teachers are also believed to have joined some of the protests.

At least nine BUET students have been detained, some of them belonging to the ruling party, in connection with the murder.

Chhatra League has gone out of control of the government. Their questionable activities have to be stopped

Earlier, Additional Deputy Commissioner of Dhaka Metropolitan Police Abdul Baten told reporters that they had taken students into custody after they were identified based on security camera footage.

Police has not yet revealed the motive behind the murder that has caused public outrage.

The Chhatra League activists interrogated Fahad over his alleged involvement with Chhatra Shibir – the student wing of Jamaat-e-Islami, the country’s largest Islamist party – which has political ties with the main opposition Bangladesh Nationalist Party (BNP).

Ashikul Islam Bitu, assistant secretary of the BUET unit of Chhatra League admitted that Fahad was picked up from his room by the ruling party activists on suspicion that he was a Shibir activist.

BUET’s residential physician Dr Mashuk Elahi told reporters that students of the Sher-e-Bangla hall called him at about 3am. “I went to the hall and saw the body near the stairs. By then he was dead. There were injury marks all over his body.”

Awami League party General Secretary Obaidul Quader said “the law would take its own course” in a damage control exercise.

“Investigation is on. Legal action will be taken against those who will be found responsible in the investigation,” he said replying to a query from reporters over the incident.

The main opposition BNP condemned the murder and said the ruling party members have “stained their hands with blood”.

“It seems to me that we are living in a death valley,” BNP Secretary-General Mirza Fakhrul Islam Alamgir said in a statement.

In recent months, Prime Minister Hasina, who is also the president of the Awami League, had cracked down on Chhatra League activities over allegations of corruption, violence and extortion.

Last month, Rezwanul Haque Chowdhury Shovon and Golam Rabbani were sacked from their posts of Chhatra League president and general secretary respectively after allegations of extortion.

Asif Nazrul, professor of law at Dhaka University said: “Who gave the right to Chhatra League to interrogate another fellow student for his involvement with Shibir or posting anti-government Facebook statuses?”

“Chhatra League has gone out of control of the government. Their questionable activities have to be stopped,” he told Al Jazeera. 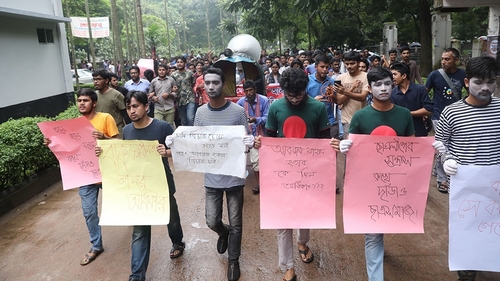 Police have detained at least nine BUET students, some of them belonging to the ruling party, in connection with the murder Mahmud Hossain Opu/Al Jazeera