Tokyo, Japan – One of the most politically-charged religious sites in Asia sits on an island of natural serenity.

Yasukuni Shrine is surrounded by gingko, cypress, and maple; an abundance of green in the heart of Tokyo where it serves as an important – and divisive – spiritual role in Japan’s native Shinto religion.

Emperor Meiji, who reigned from 1868 until his death in 1912 had Yasukuni established in 1869 to enshrine the souls of fighters who had died in the country’s civil wars.

The deceased from later conflicts, including wars with Qing Dynasty China, Russia and World War II are also memorialised – in all nearly 2.5 million people.

But controversy began in 1978 when 14 Japanese civilian and military leaders convicted by a post-war international tribunal known as “Class A War Criminals” were enshrined.

Sacred to nationalists, Yasukuni has become a lightning rod for critics, particularly in China, the two Koreas and Taiwan. But also at home, some say the temple glorifies Japan’s militaristic and colonial past for which they say the country has yet to properly atone.

Supporters say that Japan has a right to honour its people who died in war just like other countries.

But even people who offer prayers at Yasukuni argue the enshrinement of the convicted war criminals is a stain on the memory of so many others who fought and died.

Yutaka Katagi, 59, works in the property industry and visits the shrine almost every day on his way to the office to greet the enshrined souls, as he did on Thursday.

“There were so many pitiful people who died when the nation used laws to draft them and then ordered them to fight and kill total strangers against whom they bore no malice,” said Katagi, whose great uncle died during the war on the southern Japanese island of Okinawa. “We should bow our heads to them.” 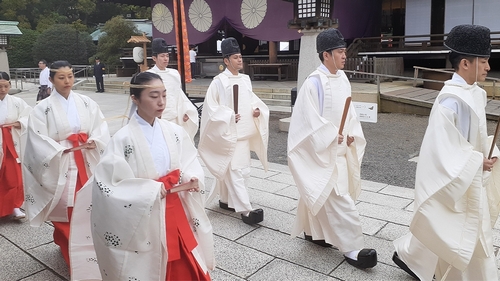 The international spotlight on Yasukuni happens mostly three times a year:  On and around August 15, the anniversary of Japan’s surrender in World War II when legislators, cabinet ministers and prime ministers visit. And in April and October for seasonal festivals and important rites.

The festival is taking place just days before the new Emperor Naruhito, whose reign began in May, is due to be formally enthroned. It also comes as relations with South Korea, which was a Japanese colony between 1910 and 1945, are at their worst level in decades.

Yasukuni is marking its 150th anniversary this year. Once just a quiet memorial, the enshrinement of war criminals in 1978 transformed it into a place fraught with political symbolism.

The wartime Emperor Hirohito, grandson of Emperor Meiji, stopped visiting after that date.

Prime ministers have largely stayed away, but not all of them.

Yasuhiro Nakasone was the first prime minister to visit, paying his respects at Yasukuni in 1985.

Junichiro Koizumi, who was prime minister from 2001 until 2006 visited frequently.

Current nationalist Prime Minister Shinzo Abe has pushed for Japan to take a more assertive diplomatic and military stance has visited once in his nearly seven years in office, drawing condemnation.

On Thursday, Seiichi Eto, the minister in charge of Okinawa and Northern Territories affairs visited the shrine, becoming the first cabinet member to venture there in more than two years.

“The act of some Japanese politicians again shows the country’s erroneous attitude towards its history of aggression,” a foreign ministry spokesman said. 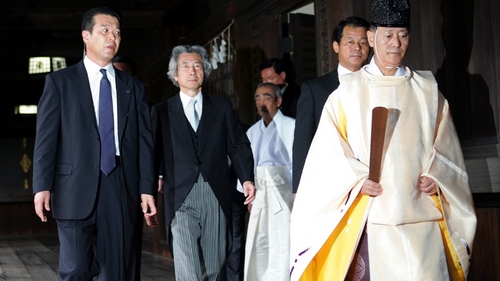 Akiko Takenaka, associate professor of history at the University of Kentucky in the United States and author of a book on Yasukuni, said that tensions surrounding the shrine tend to wax and wane depending on how  nationalistic those in power are.

Tensions rose after Nakasone visited in 1985, then spiked again when Koizumi started going there, Takenaka said. Abe’s visits have again brought it to the fore, she added.

“I think there is a lot of effort on the right to keep it relevant and not let it die out,” Takenaka said. Furthermore, China and South Korea also use public anger stoke by shrine visIts to “build and strengthen their nationalism,” she added.

“And so it has become this very convenient tool in a way. So I’m not seeing any solutions now.”

Abe’s visit in December 2013 further inflamed tensions with China, which were already at boiling point over a maritime territorial dispute that sometimes saw violent anti-Japanese protests.

But ties between the two have gradually improved in recent years and a state visit by Chinese President Xi Jinping is expected next year.

Even though Abe has shied away from further visits, he generally sends a ritual floral offering, as he did on Thursday.

And while emperors do not attend, an imperial emissary visits during the shrine’s spring and autumn festivals. 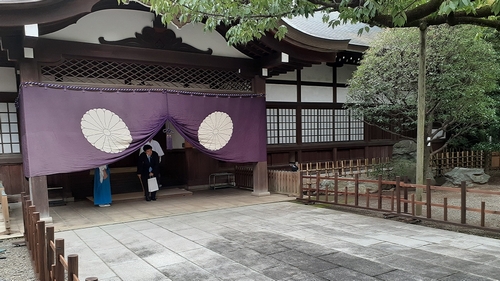 Shinto is just one part of Japan’s multi-layered religious landscape.

That complexity was on display on Thursday at Yasukuni when a Japanese Catholic nun passing through the shrine’s grounds paused to bow as she crossed the area in front of its main building as a show of respect for the souls remembered there.

A 79-year-old woman whose father died fighting in China during the war and is enshrined at Yasukuni often meets up with her younger brother to offer prayers.

“Our father is at rest here,” she said, adding that because he died when she was just four or five years old she had no memory of him.

But she increasingly feels there is something wrong with Yasukuni.

“As I’ve come to know how the war came about, I oppose the enshrinement of people who were war criminals,” she said, declining to give her name for fear she could be severely criticised for such a view.

Given its martial associations, the shrine is a beacon for those unrepentant for Japan’s actions during World War II.

A museum on the shrine’s grounds recounts the conflict through a nationalist lens.

Perhaps because of the political controversy Chinese tourists, sometimes visit the shrine.

While few were willing to air their thoughts, Jimmy Su, a 21-year-old university student from Taiwan who was doing an internship in Japan and is a fan of its anime films and manga comic books did. He said he was curious to see Yasukuni given his own island’s history as a former Japanese colony and the enmity harboured towards Japan by some Taiwanese.

“But in fact I feel like I’m just visiting here, that’s all,” Su said, charmed by the site’s sense of calm. 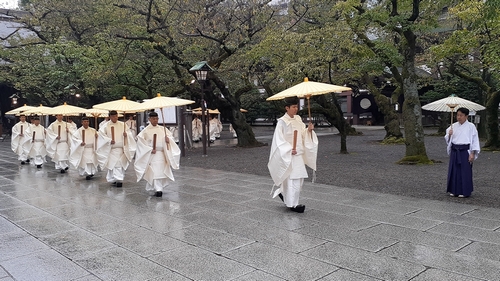 Shinto priests walk in a procession in the grounds of Yasukuni Shrine in Tokyo during the Autumn Festival on October 17. Kelly Olsen/Al Jazeera