On Tuesday, November 12, Israeli forces assassinated Islamic Jihad Commander Bahaa Abu al-Ata, along with his wife, in their home in the besieged Gaza strip. 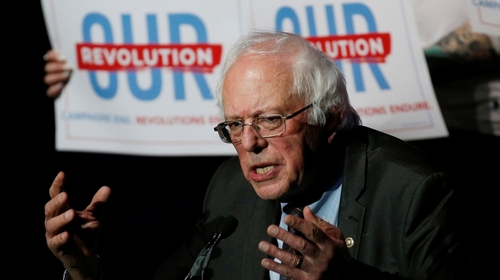 US Senator Bernie Sanders speaks at a Our Revolution rally in Boston, Massachusetts, US, March 31, 2017 File: Mary Schwal/Reuters

On November 18, US Secretary of State Mike Pompeo announced that the US now considers Israeli settlements in the Occupied Palestinian Territories (OPT) to be legal, in contrast to international law and consensus.

These events constitute the latest episode of assaults on the Palestinian people by the settler colonialist dynamic duo – Israel and the United States.

Statements on Twitter by Democratic candidates for president, Joe Biden and Pete Buttegieg were in line with the traditional Zionist, pro-Israel bias of their party, essentially victim-blaming Palestinians, while ignoring the true timing of events, relevant international law and basic human decency.

The responses from Senators Bernie Sanders and Elizabeth Warren were somewhat more nuanced, acknowledging Palestinian suffering, yet presenting the events within typical liberal Zionist false equivalency between the Israeli occupiers and the besieged, disenfranchised and occupied Palestinians. Warren’s tweet came only 14 minutes after Sanders’ and with identical talking points, suggesting the former is taking cues from the latter. Further, Warren’s response was consistent with her blatantly hawkish foreign policy agenda, which has included the usual Zionist racist narrative.

Sanders has received considerable support from prominent Palestinians. In fact, within a bi-partisan, imperialist, pro-Israel consensus, Sanders demonstrates the most favourable views on Palestine and other foreign policy issues, though his record generally conforms to interests of the American empire.

Remarkably, the Jewish American Senator from Vermont suggested US military aid should be leveraged to end abuses of Palestinians within the OPT. Further, he voiced opposition to Pompeo’s recent reversal of US policy with respect to settlements in the OPT. Nevertheless, Sanders’ unsustainable liberal Zionist positions are riddled with reactionary historical revisionism, as laid out in his most recent editorial, constituting a dangerous and potentially losing strategy approaching the 2020 elections.

In his op-ed and various speaking engagements, Sanders fails to acknowledge the Christian, white supremacist and settler colonialist roots of Zionism, as detailed by anti-Zionist Jews, among others. Instead, he promotes the revisionist notion that Israel was founded on progressive values and embodies Jewish “self-determination”, with the Netanyahu government constituting a racist, right-wing aberration, instead of another chapter in the ongoing collaboration between Zionists and anti-Semites.

In fact, Zionists benefit from anti-Semitism to promote immigration as a means of battling the Palestinian “demographic threat”, and use it to justify Israel’s continued militarism, expansionism and oppression of Palestinians. Nowadays, Israel coddles up to fascistic regimes in Brazil, the US, the Philippines and Hungary while neo-Nazis find inspiration in racist Israeli policies and use the term “white Zionism” to describe the “alt-right” neo-fascistic movement.

Sanders echoes the Zionist propaganda fallacy which equates Zionism with Judaism and presents Jewish and Palestinian narratives of victimhood as comparable, thus directly promoting the false equivalency between the occupier and the occupied and maintaining the disgraceful unjust status quo where further settler-colonial theft and genocide by Israel is enabled. In addition, Sanders propagates the idea that Israeli occupation began in 1967, not 1948, thus erasing the continuing discrimination against Palestinians within the “Green Line” and the rights of millions of refugees who were evicted during the Nakba. Finally, he champions the apartheid-entrenching, unfeasible two-state solution instead of a moral, equal and just state for all its citizens, and does not support the non-violent, anti-racist, Palestinian-led Boycott, Divestment and Sanctions (BDS) movement, though he believes in its legitimacy as a resistance tactic.

Thus, Sanders’ notions regarding the US’s role as an impartial arbiter ring hollow when he adopts the very positions and rhetoric (eg “Israeli-Palestinian conflict”, “Palestinian terror”) of the brutal military occupier.

Donald Trump has proven remarkably resilient to attacks coming from the centrist neoliberal Democratic Party establishment and mainstream media, in spite of his relatively low popularity in the eyes of the public. His strategy, which carried him to victory over Hillary Clinton in 2016, has been to demonstrate the often very real corruption and hypocrisies of his critics as a means of dispelling his own, claiming he is a victim of a “witch-hunt”. Trump’s fascistic narrative has served to fortify his white base while further fragmenting and scapegoating those opposed to his racist, hyper-capitalist agenda, including women, black and brown people, immigrants, Indigenous groups, Muslims, Jews, disabled people, LGBTQI, and more.

Christian and Jewish Zionists in the US and Israel have served as major Trump allies with two main functions. First, Republicans and their cronies have been some of Trump’s strongest supporters, providing him with crucial vindication against accusations of anti-Semitic incitement, while deploying false allegations of “anti-Semitism” as reactionary political tools. Second, liberal Zionists, although claiming to be opposed to Trump’s grotesque nativism, have spearheaded racist attacks on progressive critics of Israel who also constitute some of Trump’s fiercest opposition, such as Congresswoman Ilhan Omar. What began as a deceptive liberal Zionist campaign against her, galvanised opportunistic American Liberals to demean the progressive camp, which pressured Omar to needlessly apologise. Smelling blood, Republicans targeted Omar in an effort to further splinter their opposition.

Liberal Zionist-led smear campaigns are dependent on the equation of Zionism and Judaism, conflating criticism of Israel with anti-Jewish sentiments. Thus, Sanders’ acceptance of Israel as a “Jewish state” renders him vulnerable.

Many Americans have understandably chosen to refrain from participation in the quadra-annual election circus, which is dominated by ultra-rich and corporate interests. Former President Barack Obama contributed to the epidemic of apathy in America, as he rode a wave of “hope and change” into the Oval Office, only to betray his promises by ingraining unchecked corporate greed, racism and war.

The increased corruption of the Democratic party, as exemplified by both Obama and Hillary Clinton, paved the way for a Trump presidency. In fact, Trump accurately predicted an “anti-establishment” rhetoric with a twist of racism would serve to inspire both reactionaries and cynics, even on Palestine.

A Sanders path to victory is dependent on inspiring disillusioned non-voters by setting himself apart from corporate-serving Democratic party candidates, and their continued support of Israel. Sanders has indeed differentiated himself by refusing to bow down to corporate interests and persisting on the left of the contemporary political spectrum. In direct opposition to Trump’s strategy, which aims to demonstrate the hypocrisy and corruption of his opposition and himself as the only honest politician who can “drain the DC swamp”, Sanders would be wise to continue veering left and unifying the very groups Trump has alienated, instead of staring towards the centre in an attempt to flip Republicans, a tactic that plays into Trump’s hands.

Sanders wisely supported Representatives Omar (Minnesota), Tlaib (Michigan) and Ocasio-Cortez (New York) against Republican and Zionist detractors, firmly stating that criticism of Israel does not constitute anti-Semitism. However, his liberal Zionist rhetoric alienates important progressive constituencies and renders him susceptible to attacks from Zionists on the right, including Trump, who correctly identify his hypocrisy and inconsistency on this issue.

Sanders has a unique opportunity to powerfully inspire a real grassroots “political revolution” by confronting his own complicity with Zionist criminality and the bi-partisan consensus on Israel/Palestine. The courage to recognise Israel’s crimes and support Palestinians in their struggle for freedom are morally consistent, left-wing, anti-establishment, anti-imperialist positions, which do not come at the expense of Israelis or Jews. Opposition to ongoing apartheid and genocide in Israel/Palestine and support for peaceful tactics such as BDS are key galvanising themes, which would set Sanders apart from other candidates.

Sanders must understand that there is no Zionism without anti-Semitism, no American exceptionalism without gross inequality and massive subjugation of the “other”, no Jewish homeland without white privilege and genocide of native Palestinians, and no “political revolution” without full rights for all Palestinians.