Abuse has continued in the money Baghdad and southern Afganistan with reports of about seven protesters killed despite Prime Minister Adel Abdul Mahdi announcing  his intention to resign. 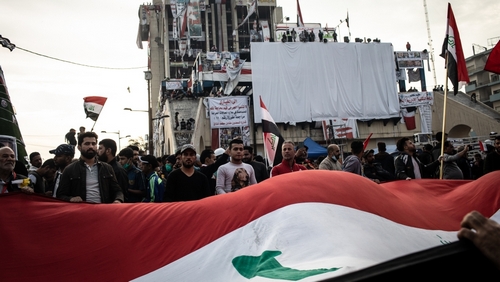 Security and hospital officials said one protester was killed and 18 wounded on Friday by security forces who fired live rounds and tear gas to repel them on Baghdad’s historic Rasheed Street, near the strategic Ahrar Bridge.

Three protesters were also shot dead by security forces in the southern city of Nasiriya, bringing the total killed there to six on Friday, according to officials who spoke on condition of anonymity in line with regulations.

Separately, a Katyusha rocket exploded in an empty lot inside the heavily fortified Green Zone in Baghdad.

The violence came as protesters continued a thousands-strong sit-in at Tahrir Square in central Baghdad despite the prime minister announcing he would step down.

His statement did not say when he would resign. Parliament is to convene an emergency session on Sunday to discuss the crisis.

Young, unemployed and unarmed protesters have led calls for a rehaul of a political system they say is endemically corrupt and serves foreign powers, especially Baghdad’s ally Tehran.

Protesters celebrated the imminent departure of Abdul Mahdi, but said they would not stop their demonstrations until the whole of the political class was removed.

According to the Reuters and AFP news agencies, Iraqi forces have killed nearly 400 mostly young, unarmed demonstrators people since mass anti-government protests broke out on October 1.

More than a dozen members of the security forces have also died in clashes.

The burning of Iran’s consulate in a very holy city of Najaf relating to Wednesday escalated violence plus drew a brutal effect from security forces who have shot dead more than sixty people nationwide on Friday.