Soon after moving into the White House, US President Donald Trump vowed to do what his predecessors could not: broker a sustainable peace deal between Israel and Palestine. Three years into his presidency, however, the details of the political portion of his so-called “deal of the century” have still not been revealed, and peace remains as elusive for Palestine as ever. 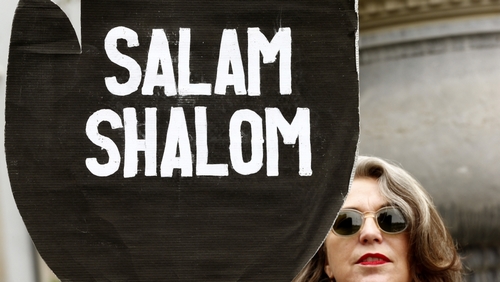 A woman displays poster demanding ‘Salam, Shalom’ (peace, peace) during a demonstration for peace in Palestine in Zurich on July 29, 2014 Reuters/Arnd Wiegmann

Palestinians knew from the get-go that Trump’s deal would not bring an end to their colonial reality. They were sceptical not only because the deal was being drafted by a spectacularly inexperienced and staunchly pro-Israel team, but also because in Palestine, “peace” itself is underpinned by a trail of betrayal.

Palestinians learned long ago that in the context of the Israeli-Palestinian negotiations, “peace” takes a particularly twisted dimension. It is often associated with “solutions” to the Palestinian “problem” which fail to deliver justice or equality for the Palestinian people. This has been the case with the failed 1993 Oslo Peace Accords and this is undoubtedly going to be the case with Trump’s “ultimate deal”.

The attempts to bring “peace” to Palestine often focus on offering Palestinians “economic opportunities” to convince them to give up their struggle for a free and dignified existence in their homeland and to accept the conditions imposed on them by Israel. Trump already showed he is not going to break away from the fold in this regard when his team revealed the “economic part” of their “peace plan” – a proposal to give the Palestinians $50bn to help their economy – without addressing the Israeli military occupation, which is at the core of Palestine’s myriad economic, political and humanitarian problems.

Palestinians are sceptical of any attempt to reach a socio-political resolution that emphasises the notion of peace because we know such attempts reduce our struggle to a mere inconvenience. The Western and Israeli sellers of peace see our resistance as a burden and a testament to Middle Eastern peoples’ alleged inability to co-exist in peace. This is why they keep telling us that to achieve peace, we first need to be “tolerant” – meaning we should accept the theft of our land and the apartheid state that we currently live in.

Palestinian resistance, both violent and non-violent, is constantly branded as an “obstacle to peace”.  Meanwhile, Israel regularly evokes the mantra that it has the “right to defend itself”.

Just this week, Prime Minister Benjamin Netanyahu uttered those very words after Israel’s assassination of Islamic Jihad leader Baha Abu al-Atta and his wife in Gaza. The same was said when Palestinians are peacefully protesting against fully armed soldiers.

While we are constantly being accused of committing violent acts, the violence unleashed on us constantly is never recognised. When we are not bombed or sniped down by the hundreds, we are humiliated, oppressed and violated on a daily basis – whether it is when going through a military checkpoint, facing a new Israeli discriminatory law, getting evicted from our homes, trying to eat in the dark because of a power cut, struggling to prove our innocence in Israel’s military courts, trying to survive in Israel’s prisons or enduring the pressure from the de facto police states that our governments really are.

Even the simple task of trying to be with who you love sometimes means suffering through a variety of microaggressions by the occupation since Palestinians from the West Bank, Gaza and the rest of historic Palestine are physically and legally divided from one another.

And yet efforts for “peace” in Palestine always require the Palestinians – and never the Israelis – to make a concession and settle for less: less sovereignty, less freedom and fewer rights. Year after year, negotiators, diplomats and politicians, ask us to accept as normal the existence of a hostile settler colony on our ancestral lands and the oppression we endure at the hands of the Israeli occupiers

This is why Palestinians always find themselves worse off after every attempt to achieve “peace”. The Paris Protocol (a corollary of the 1993 Oslo Peace Accords), for example, increased the Palestinian economy’s dependence on Israel, while Oslo itself allowed for de facto Israeli control of more than 62 percent of the West Bank.

Palestinians are still expected to accept any offer that is dressed up as “a step towards peace” and are criminalised when they do not. A rejection of a peace plan becomes an emblem of Palestinian unwillingness to achieve peace, rather than a recognition of the flawed nature of a proposed solution which does not recognise the need for justice.

Peace is undoubtedly something the Palestinian people want. But they aren’t leading a war. They have no official army, no official borders; they have no control over their resources and lands; and even their politicians are sometimes assassinated or incarcerated. If peace is seen as something separate from and more crucial than “justice”, then it turns into a quest for normalising colonial oppression and a quiet and distracted population.

When it comes to the Israeli-Palestinian conflict, “peace” is a euphemism for the prolongation of the status quo and the continued deterioration of the living standards of Palestinians.

This is why it is time for the actors who are trying to deliver a solution to the Israeli-Palestinian conflict to focus their efforts on delivering justice first. This entails the end of the colonial oppression of our people, the end of the restrictions on our movement, the end of apartheid, the end of us being treated as less than human in our homeland.

Only then can Palestine achieve real peace – a peace defined not by the absence of overt violence, but by the ability of all inhabitants of this land to live, move and breathe freely.