On October 3, Golfrid Siregar, his friend and colleague at the biggest environmental group in Indonesia, was found in an underpass in the city of Medan on the island of Sumatra with a serious head wound.

Three days later he was dead.

Since then, Bukhari has been struggling to understand what happened to the 34-year-old lawyer and environmental activist, whose sudden death has sparked calls for a thorough investigation from human rights groups including Amnesty Indonesia and Human Rights Watch.

“He was my sparring partner as well as someone I worked with,” Bukhari, the Head of Advocacy and Campaigns at the Indonesian Forum for the Environment (WALHI) North Sumatra, told Al Jazeera.

“He was a great lawyer and environmental activist, and we used to debate about everything. He was vocal, diligent and unafraid.”

Siregar was taken to hospital by a passing pedicab driver who found him unconscious by the road.

“It looked like half his head was gone,” Bukhari, who arrived at the hospital the next day, told Al Jazeera.

“He had a bruise on the right side of his face and his right eye was swollen, but his body didn’t have any other marks on it.”

“We tried everything we could medically to save him,” Bukhari continued.

On October 11, North Sumatra Chief-of-Police, Agus Andriyanto, released a media statement saying that Siregar died in a traffic accident when his motorbike hit a kerb, and that an autopsy found alcohol in his system.

But many, including human rights groups WALHI and Amnesty Indonesia, are sceptical, citing multiple inconsistencies in the case. 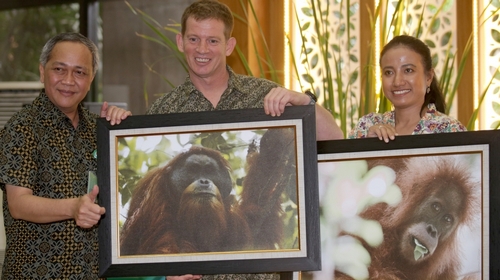 The Tapanuli orangutan – Pongo Tapanuliensis – was revealed to be a distinct species in 2017. It is the rarest of all the world’s great apes. Bagus Indahono/EPA

Speaking to Al Jazeera, Usman Hamid, the Head of Amnesty Indonesia, said the cause of Golfrid Siregar’s death required thorough investigation “due to his profile and his activism background”.

Before his death, Siregar, “had been a strong critic of a hydro dam project in Batang Toru, South Tapanuli, North Sumatra,” Usman added. “He was also critical of other government policies and projects that were threatening the environment.”

Kiki Taufik, the Global Project Leader of the Indonesia Forest Campaign at Greenpeace Indonesia, told Al Jazeera that the plant’s construction was “a threat to the local Tapanuli orangutan habitat,” and could potentially wipe out the ape in the area.

The Tapanuli orangutan was only discovered two years ago, and is the most endangered giant ape in the world with only 800 left in the wild.

Taufik added that the dam’s Environmental Impact Assessment (EIA) had also been forged.

In early 2019, Onrizal, a forestry researcher at the University of North Sumatra, said that his signature had been forged on a revised EIA the company had used to obtain a licence. He also claimed that the revised assessment omitted his analysis about the impact of the project on local orangutan and tiger populations.

Siregar was the coordinator of WALHI’s legal team and had filed a motion to prevent the hydropower plant from being built, which was later rejected by the Indonesian courts. The case is still going through the appeals process.

In August 2019, Siregar had also reported a number of police investigators in Medan for closing the case on the faked impact assessment. Friends said that he had sometimes received threats as a result of his advocacy work, but that he had not mentioned any in recent months.

PT North Sumatra Hydro Energy did not respond to Al Jazeera’s request for comment on the case. 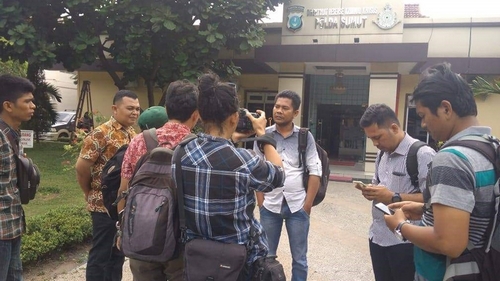 Amnesty Indonesia’s Hamid said there was a growing climate of hostility towards activists in Indonesia.

“More and more activists have been the victims of intimidation, stigma, death threats and criminalisation,” he said.

Hamid said that cases of harassment or violence against activists were rarely taken seriously by the authorities, who often accused them of trying to disrupt government plans for development. In early 2019, another WALHI activist, Murdhani, had his house burned down in Central Lombok.

The police originally released Siregar’s body to the family, but then recalled it to perform a full autopsy, prompted by growing pressure from family, friends and the media, who were calling for a full investigation into Siregar’s death.

Standard procedure states that an autopsy must be completed immediately when there is suspicion of foul play, according to Dr Poaradda Nababan, a surgeon and a member of North Sumatra Province Legislative Assembly.

By the time the autopsy took place, the body had been bathed and embalmed, meaning that vital evidence could have been lost.

I’ll miss his bravery and his outspoken style.There was so much more work we were going to do.

Nababan told Al Jazeera that, in his medical opinion, Siregar’s injuries were inconsistent with a traffic accident, as he was found with a large wound at the back of his head and few other injuries. “In cases of traffic accidents, we would expect to see other injuries such as lacerations to the body, particularly on the arms and legs,” he said.

Siregar’s motorbike was also only slightly damaged and his clothes were intact.

His wallet, laptop, mobile phone and rings were missing, leading to suspicions that he had been attacked and robbed.

On Thursday, the head of the criminal investigation, Eko Hartanto, said that two people who helped bring Siregar to hospital had been charged with theft, but were not suspected of assaulting him.

The case is now closed, the police said.

His former colleague and friend Bukhari said he was “floored” and “sad” about the death of Siregar, who leaves behind a wife and two-year-old daughter.

“I’ll miss his bravery and his outspoken style,” he added. “There was so much more work we were going to do.”