The Gambia brought genocide case against Myanmar on November 11 in the International Court of Justice (ICJ), urging the UN court to order measures to immediately stop atrocities and genocide against its own Rohingya people.

Last week, three separate cases were filed against Myanmar for atrocities against Rohingya people in the first international legal attempts to bring justice to the persecuted Muslim minority.

On November 14, the International Criminal Court (ICC) launched an investigation into Rohingya prosecution, while a separate lawsuit was filed against Myanmar’s de facto ruler Aung San Suu Kyi in an Argentine court.

Thousands of Rohingya have been killed and more than 740 000 of them have taken shelter in neighbouring Bangladesh since August 2017 to escape what has been called an ethnic cleansing campaign involving gang rapes, killings and arson.

A UN report released last year called for the military leaders to be investigated for genocide and war crimes in Rakhine state.

“Rohingya victims have been waiting for a long time for international courts to take action against the Myanmar government for its ongoing atrocities against the Rohingya Muslim minority,” said Nay San Lwin, campaign coordinator of the Free Rohingya Coalition.

The UN court based in The Hague said it will hold public hearings in the case next month.

The three cases are complementary but can be distinguished on the basis of the crimes they charge Myanmar with, the identity of the accused and the remedies the courts can order. Each court offers distinct advantages.

The Gambia, which has the support of the 57-nation Organisation of Islamic Conference (OIC), filed the case at the ICJ, accusing Myanmar of breaching the 1948 UN Genocide Convention. 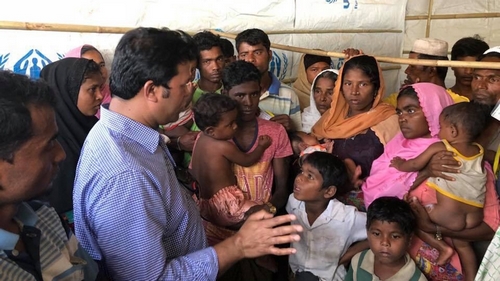 The ICJ set up in 1946 only hears disputes between states, which means individuals cannot sue or be sued in the Hague-based court also known as the World Court.

“Whereas the cases before the ICC and Argentina involve individual criminal responsibility, the case before the ICJ involves the determination of whether a state has breached international law,” explained Mark Drumbl, the professor of law at Washington and Lee University.

The Gambia alleges that Myanmar’s campaign against the Rohingya amounted to genocide since it includes ‘killing, causing serious bodily and mental harm, inflicting conditions that are calculated to bring about physical destruction, imposing measures to prevent births and forcible transfers’.

It says Myanma’s actions are “genocidal in character because they are intended to destroy the Rohingya group in whole or in part”.

The Gambia is instituting procedures on genocide and also asking the court to take provisional measures against Myanmar.

Philippe Sands QC, professor at University College London and counsel to the Gambia in this case, said that provisional measures are a form of interim and urgent relief.

“…Since court cases of this kind can take many years to resolve, the strategy of applying for urgent interim measures is positive for the Rohingya,” he said.

Human rights activists have campaigned for the UN Security Council to refer Myanmar to the ICC since 2017, but China and Russia have repeatedly blocked those attempts. As a result, the UN has been criticised for its inaction on the Rohingya crisis.

But on Thursday, ICC judges approved a request from Chief Prosecutor Fatou Bensouda to open an investigation into crimes committed against Rohingya population.

The court stated that a panel of judges concluded that there are grounds to believe that widespread acts of violence were committed “that could qualify as the crimes against humanity of deportation across the Myanmar-Bangladesh border and persecution on the grounds of ethnicity and/or religion against the Rohingya population”.

Myanmar is not a member of the ICC, but the prosecutors say Myanmar can be held responsible for crimes that affect neighbouring Bangladesh, which is a member of the court, also based in The Hague.

In contrast to the cases brought in the ICJ and Argentina, an advantage of proceeding through the ICC is that it has the mandate to make reparations to victims through its Trust Fund for Victims.

And unlike in other courts, victims have the right to participate in proceedings before the ICC, not only as witnesses for the prosecution but as independent participants.

“If Myanmar were constrained by the ICC to stop any genocidal actions, that would immediately bring succour to the lives of hundreds of thousands of people,” said Reed Brody, the commissioner at the International Commission of Jurists.

In parallel with the two cases initiated in international courts, a case was brought in Argentina using the legal principle of universal jurisdiction that allows courts to prosecute international crimes committed anywhere in the world.

Aung San Suu Kyi, the state counsellor of Myanmar and the de facto ruler, as well as several other top Myanmar officials, were named in the Argentina lawsuit.

It is the first international case in which Aung San Suu Kyi, the recipient of Nobel Peace Prize, is being sued in her personal capacity.

The applicants in the case allege that Aung San Suu Kyi oversaw government policies “tending towards the annihilation of the Rohingya” such as confining them to ghettoes with severely limited access to healthcare and genocide.

The complaint stated that she used her power to help, rather than hinder, the efforts to destroy the Rohingya as a group.

According to Tun Khin, founder of the Burmese Rohingya Organisation UK, who filed the case in the Argentine court, said that courts in the Latin American nation have experience with hearing universal jurisdiction cases against dictators.

It is not unusual for multiple international court cases to be brought for the same crimes, legal experts say.

“Multiple cases were initiated in the contexts of the atrocities committed in the former Yugoslavia and Rwanda, for example,” said Drumbl, the law professor.

Brody, the Commissioner at the International Commission of Jurists, called the three attempts an “accountability hat-trick”.

“It is indeed a grand-slam if you include the UN Independent Investigative Mechanism for Myanmar. Bringing four separate procedures to bear can help ensure that no stone will be left unturned,” he said.

But there are also drawbacks to bringing multiple cases.

“The problem arises when these multiple proceedings involve the same accused or the same conduct,” said Drumbl, the professor of law at Washington and Lee University.

“Then competitive controversies arise among these courts regarding the custody over the accused, access to witnesses and evidentiary records, sequencing, immunities and due process concerns for defendants amid multiple proceedings for the same conduct.”

But Rohingya activist Tun Khin said it is “good news”. “These cases will make a big difference. The international community needs to know what happened to the Rohingya.”