The shooting in Khaldeh on Tuesday was the first of its kind in nearly a month of mass protests calling for an overhaul of Lebanon’s political system and the departure of the ruling elite over a dire economic crisis.

Tensions have flared in Lebanon after President Michel Aoun urged protesters to go home, sparking a new wave of demonstrations during which a man was shot by a soldier who opened fire to disperse people blocking roads south of the capital, Beirut.

The man who was killed was a member of the Progressive Socialist Party led by Walid Jumblatt, a Druze leader. Jumblatt urged his supporters to remain calm during a visit to the hospital where the man had been taken.

The victim “succumbed to his injuries” in hospital, the National News Agency said.

The army said in a statement a soldier had opened fire to disperse protesters who were blocking a road in Khaldeh, wounding one person. The soldier had been detained and the incident was under investigation.

The escalation came after Aoun indicated in a TV interview that there had been no breakthrough in talks over forming a new government to replace Prime Minister Saad Hariri’s coalition cabinet.

Hariri, who resigned on October 29 in response to the huge protests, was hesitant about being prime minister again, he said.

Aoun also said a purely technocratic government, as demanded by many in the leaderless protest movement, would not be able to govern Lebanon and so it should include politicians.

Addressing protesters, he said: “If you continue in this way, you will strike Lebanon and your interests.

“We are working day and night to get the situation in order. If they keep going, there is a catastrophe. If they stop, there is still room for (us) to fix things,” he said.

Asked if he was facing pressure from outside Lebanon to not include Hezbollah – a powerful Iran-backed Shia group – in a new government, he did not deny it.

But, he said: “They can’t force me to get rid of a party that represents at least a third of Lebanese.”

As Aoun’s interview was ending, protesters blocked several main roads across Lebanon, some with burning tyres.

In the Cola district near Beirut, dozens of men pelted stones at soldiers and a tank.

Linda Boulos Mikari, protesting on a road north of the capital, said Aoun’s interview had brought her back onto the street.

“We are tired of the authorities always (acting) as if we are doing nothing. The president goes live and talks to us as if we are children, ‘go home’. Respect us a little,” she told Reuters News Agency.

Al Jazeera’s Stefanie Dekker, reporting from the site of the shooting in Khaldeh, said protesters were angry at Aoun’s speech, calling him “detached, provocative, and arrogant.”

“They are back on the roads, trying to block them as a way to keep the pressure on the government,” she said. “The message from the president last night was far more defiant than we heard him before.”

Protesters back to blocking roads all across the country. “Arrogant, provocative , crazy” just some of the words used by protesters to describe the President’s speech. #LebanonProtests pic.twitter.com/z50zCWKRbA

The protests erupted on October 17, at a time many Lebanese were fearful of a looming currency crisis and angry at a long-dominant political class deemed too corrupt and inefficient to provide even the most basic of public services.

They have since swelled into the biggest protest movement the country has seen in decades, bring together people from across Lebanon’s religious and political divides.

Commercial banks, seeking to avoid capital flight, have been imposing tight restrictions on financial transfers out of the country and withdrawals of US dollars.

Banks, which were closed for half of October during the protests, shut their doors again on Tuesday in strike action by employees concerned about security risks posed by depositors demanding their money and protesters.

The strike will continue on Wednesday. Aoun called on the Lebanese not to rush to the banks, saying their money was safe.

Meanwhile, the United Nations’ special coordinator for the country, Jan Kubis, urged Lebanon to accelerate the formation of a new government that would be able “to appeal for support from Lebanon’s international partners”.

“The financial and economic situation is critical, and the government and other authorities cannot wait any longer to start addressing it,” he said.

The World Bank has warned the country’s struggling economy could further deteriorate if a new cabinet is not formed soon.

Forming a government typically takes months in Lebanon, with protracted debate on how best to maintain a fragile balance between religious communities.

Protesters want the caretaker government to be replaced with a cabinet of independent experts who can lead Lebanon out of the financial crisis, secure basic services such as electricity and water, and create a new, non-sectarian electoral law.

Hariri, who is aligned with Western and Gulf Arab states, is thought to want to lead a technocratic cabinet that he believes would be better placed to secure urgently needed international financial support.

The Guardian view on moon landings: a new race for space

Before Hariri’s resignation, Hezbollah had opposed any change in government. On Monday, its leader Hassan Nasrallah said talks were continuing over the new government and Hezbollah wanted to leave open the way for an agreement.

Aoun, a political ally of Hezbollah, said he was awaiting answers before calling formal consultations with MPs to designate the next prime minister.

“A technocrat government cannot define the policy of the country… and I back forming a government that is half political and half technocrat,” Aoun said. “I met Hariri and I found him hesitant between yes and no.”

Asked if a cabinet headed by a prime minister other than Hariri and which includes Hezbollah would receive foreign support, Aoun said: “This is an issue that can also be solved.”

“I will not give you the solution while I am here on television.” 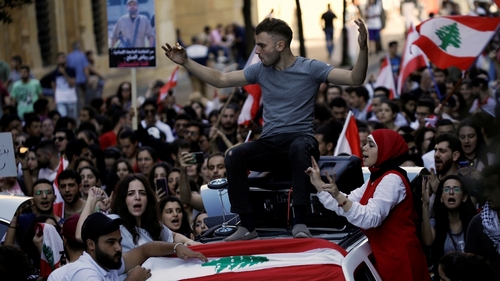