Rupert Colville, spokesman for the UN human rights office, told reporters in Geneva at least seven civilians, including a woman and a boy, had been killed since Turkey’s cross-border operation began on Wednesday.

An estimated 100,000 people have fled their homes in northeast Syria, the United Nations said, as Turkey pressed on with its offensive against Kurdish fighters despite growing international criticism of the campaign and concerns it could result in ISIL’s resurgence.

Aid officials on Friday warned of “yet another humanitarian crisis” in war-torn Syria amid mass displacement and “disturbing reports” of attacks on civilian infrastructure, including water facilities, power stations and oil fields.

Another 400,000 people in the city of Hassakah were at risk of not having access to clean water, he said, reportedly due to a Turkish raid on a water pumping station in the Syrian border town of Ras al-Ain.

“What is happening and what has been happening in the last 48 hours is extremely worrying, and I believe that we have there all the ingredients for unfortunately yet another humanitarian crisis in Syria,” said Christian Cardon de Lichtbuer, of the International Committee of the Red Cross, who spoke alongside Colville.

In a subsequent statement, the UN said markets, schools and clinics remain closed while only one hospital was operational in the area.

This came after Doctors Without Borders (MSF) announced the shutdown a hospital that served more than 200,000 people in the Syrian border town of Tal Abyad, scene of some of the heaviest fighting on Friday.

But Turkish President Recep Tayyip Erdogan pledged to continue with the assault, whose stated goal is to create a buffer zone freed of the Kurdish fighters within which some of the 3.6 million refugees currently living in Turkey can also be resettled.

“We will never stop this step. We will not stop no matter what anyone says,” he said in a speech on Friday.

Turkey insists it is targeting “terrorist positions” and shows the “utmost caution” to avoid targeting civilians and infrastructure during its operation.

Turkey’s air and ground operation into Syria came after Donald Trump, the president of the United States, pulled his country’s troops from their positions near the border, leaving the Kurdish-led Syrian Democratic Forces (SDF) vulnerable to a Turkish assault.

The SDF was Washington’s main ally in the fight against the Islamic State of Iraq and the Levant (ISIL, or ISIS), but Ankara considers the Kurdish-led forces a “terrorist” group.

“The Turkish military is using heavy firepower – air strikes, artillery shelling, as well as rocket fire. The town of Tal Abyad is empty of civilians,” she said. “The SDF is outgunned and outnumbered, but they have promised to put up a difficult fight, and have been firing rockets into Turkish border towns.”

Turkish fighter jets and artillery also struck around Syria’s Ras al-Ain, the other border town that has been the focus of the Turkish offensive. 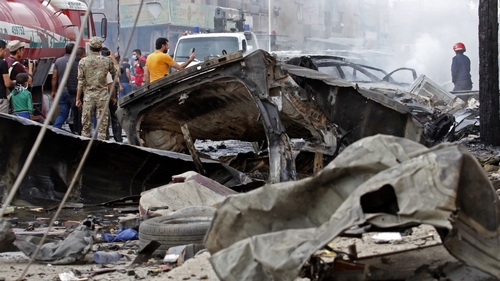 People gather at the site of an explosion in the northeastern Syrian Kurdish city of Qamishli on October 11, 2019 Mohammed Ahmad/ AFP

The Anadolu agency said 10 civilians were killed from SDF’s mortar attacks on the Turkish side on Friday – eight in the town of Nusaybin and two in the town of Suruc. The state-run agency, citing officials, said Turkish forces and its allied Syrian opposition forces advanced 8km (five miles) into Syrian territory and captured 14 villages from the SDF.

Separately, car bombs exploded outside a restaurant in the Kurdish-controlled urban centre of Qamishli, killing at least three people, in an attack claimed by ISIL.

The SDF, which has long warned that a Turkish offensive in the region could revive ISIL, also said five suspected fighters from the armed group had escaped from a prison in Qamishli because of Turkish shelling nearby.

Earlier on Friday, the Kurdish-led force said it quelled a riot at the al-Hawl camp, where an estimated 70,000 people, most of them relatives of the suspected ISIL fighters, were being detained.

“We hope we don’t have to use them but we can shut down the Turkish economy if we need to,” Mnuchin said.

Mark Esper, the US defence secretary, meanwhile called on Turkey to halt the Syria offensive, saying it has threatened the progress in combating ISIL and risked harm to US troops there.

A Pentagon statement on Friday said Esper called his Turkish counterpart and “strongly encouraged Turkey to discontinue actions in northeastern Syria” so that the world community “could find a common way to de-escalate the situation before it becomes irreparable”.

Amelie de Montchalin, the French secretary for European affairs, said sanctions against Turkey will be “on the table” at next week’s European Union summit, telling France Inter radio that Europe should respond to what she called a shocking situation.