Clashes between rock-throwing students and riot police broke out in the evening when police tried to disperse the protesters, ranging from high school to university students, who attempted to reach Parliament after calm had largely returned to the country’s capital over the past four days.

Thousands of Indonesian students resumed protests on Monday against a new law they say has crippled the country’s anti-corruption agency, with some clashing with police.

Authorities blocked streets leading to the Parliament building in Jakarta, where 560 members of the House of Representatives whose terms ended Monday held their last session.

Similar clashes also occurred in other cities in Indonesia, including in West Java’s Bandung city and in Makassar, the capital of South Sulawesi province, where a student was badly injured on Friday after being accidentally hit by anti-riot armor.

A protest also turned violent in President Joko Widodo’s hometown of Solo city in Central Java, where an angry mob threw rocks at police, injuring at least four female officers in the head.

The demonstrators are enraged that Parliament passed the law reducing the authority of the corruption commission, a key body fighting endemic graft and which has been one of the most credible public institutions in a country where the police and Parliament are seen widely as being corrupt.

The protests have grown since last week and turned violent in some cities.

At least three people, including two students in Kendari city on Sulawesi island, have died and several hundred were injured.

The death of the students sparked a national outcry, prompting Widodo to express his deep condolences and order the National Police chief to conduct a thorough investigation.

The protests, which underline Indonesia’s challenge in changing its graft-ridden image, have threatened the credibility of Widodo, who recently was re-elected after campaigning for clean governance. 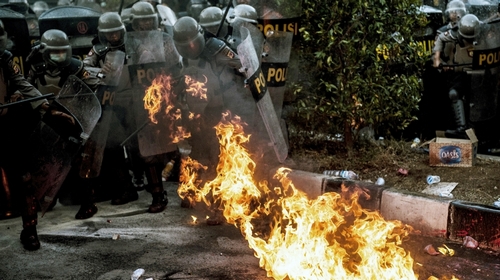 Violent protests also erupted in other parts of Indonesia including in Bandung, West Java on Monday Kusumadireza/AP

He faced down riots in May by supporters of the losing candidate, former Gen Prabowo Subianto, but those events were seen as partisan politics with limited support.

The new protests are not associated with any particular political party or group, and instead are led by students, who historically have driven political change.

Student demonstrations in 1998 triggered events that led the country’s longtime strongman leader, Suharto, to step down.

The students are demanding Widodo issue a regulation replacing the new law on the corruption commission, known by its Indonesian abbreviation, KPK. Lawmakers frequently attack the anti-graft commission and want to reduce its powers.

Widodo told reporters the government would not forbid student demonstrations and called on protesters to avoid damaging public facilities.

“Our constitution guarantees freedom of expression, but the most important, do not be an anarchist who causes harm and violates the law,” Widodo said.

He said he has listened deeply to people’s aspirations expressed by students through the protests.

Widodo said last week he was considering revoking the new anti-corruption law, but the idea was immediately opposed by members of his coalition in Parliament.

Bambang Wuryanto, a lawmaker from the governing Indonesia Democratic Party in Struggle, warned that Widodo’s political image and his ties with coalition parties would be damaged. 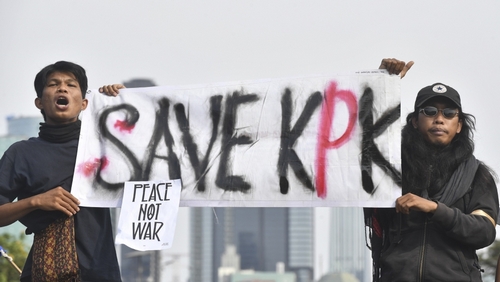 Protesters have accused politicians of trying to water down the anti-corruption agency, KPK Adek Berry/AFP

“That would mean that the president does not respect the House of Representatives,” Wuryanto said.

Are lenders losing their appetite for Saudi debt?

An anti-corruption watchdog, Indonesia Corruption Watch, accused lawmakers of trying to protect themselves after the commission named 23 sitting members of Parliament as corruption suspects, including the former House speaker and leaders of political parties.

Bivitri Susanti, a state-law analyst from the Center of Law and Policies Study, urged Widodo to immediately issue a government regulation to annul the revised KPK Law, saying it could give people an overview of some of the articles and procedures in the new KPK Law that are indeed problematic.

“We all know that political parties have an aim to make the KPK no longer effective,” Susanti said.

“The president should consider widespread people’s aspirations rather than political parties’ interests.”

Man killed as tensions flare in Lebanon after Aoun interview

Protesters killed in Iraq when HRW slams attacks onto medics