The Pentagon on Friday strongly denied accusations it was abandoning its Kurdish allies in Syria as Turkey continued its military offensive in the country’s northeast, forcing 100,000 people to flee amid heavy fighting.

“To be clear, we are not abandoning our Kurdish partner forces, and US troops remain with them in other parts of Syria. The impulsive action of President (Recep Tayyip) Erdogan to invade northern Syria has put the United States in a tough situation,” the US secretary of defence, Mark Esper, told reporters.

“Nobody green-lighted this operation by Turkey, just the opposite. We pushed back very hard at all levels for the Turks not to commence this operation,” Esper said.

Esper’s comments came amid sharp criticism of US President Donald Trump’s decision to pull back American troops in the region, leaving the Kurdish-led Syrian Democratic Forces (SDF), the US’s main ally in its fight against the Islamic State of Iraq and the Levant (ISIS or ISIL) without US military support in the area.

Just days after the decision, Turkey launched a military operation aimed at ridding the border area of Kurdish fighters and creating a “safe zone” to resettle Syrian refugees.

The SDF is led by the Kurdish People’s Protection Units (YPG), which Turkey considers a “terrorist” group.

Democrats and top Republicans slammed the US decision to withdraw troops, expressing fear over what would happen to the Kurds and the progress made in the fight against ISIL.

Republican Senator Lindsey Graham, usually a staunch Trump ally, led the chorus of disagreement that came from other politicians, analysts, and Evangelical Christians, among others, saying the decision could be the “biggest mistake of Trump’s presidency”.

“Pray for our Kurdish allies who have been shamelessly abandoned by the Trump administration. This move ensures the re-emergence of ISIS,” Graham said, as Turkey launched its operation on Wednesday.

Graham has promised to introduce a bipartisan bill to impose a list of sanctions on Turkey over its operation. Republicans in the House of Representatives have vowed to do the same.

Following the criticism, Trump promised to “obliterate” the Turkish economy if Ankara did anything he considered “off limits”. That threat was repeated by US Treasury Secretary Steven Mnuchin, who said the US would “shut down the Turkish economy” if Ankara went too far.

Mnuchin said Trump had authorised the drafting of “very significant” sanctions that the US could use “if we need to”.

But as Trump defends his decision to withdraw troops, saying he campaigned on a promise of getting the US out of “stupid endless wars” in the Middle East, some experts, albeit in the minority, have backed his new approach.

Supporting the president’s move, Doug Bandow, a senior fellow at the CATO Institute, who served as a special assistant to former President Ronald Reagan, said it was “just unreasonable” to expect the US to keep its forces in Syria.

“The idea that the US should keep its forces in Syria, create a democracy and stand up to Iran in Syria is just unreasonable,” Bandow told Al Jazeera.

“To think that Turkey, Syria, Iran and Iraq will let others carve out their countries to establish a Kurdish state in their regions and that the US must somehow stay in the Middle East to defend it is rather extraordinary,” he added.

Mark Kimmitt, a retired US general and former assistant secretary of state, said the US did not sign up for a long-term commitment to Kurds.

“The US agreed to a ‘temporary, tactical and transactional’ relationship with the YPG. But the relationship is a battlefield relationship only,” Kimmett told Al Jazeera. “The US does not endorse the YPG ideology nor its ambition to declare an independent nation in northern Syria.”

Trump appeared to strike that tone earlier this week when he told reporters that while Kurdish forces fought alongside US troops in the battle against ISIL, they did so for “their land”.

He said the Kurds did not help the US “in the second world war. They didn’t help us with Normandy”. With the Kurds predominantly living more than 4,000 km (2,482 miles) away and not having an independent state, Trump did not elaborate on the support he believed they should have provided during the 1944 Invasion of Normandy.

“With all that being said, we like the Kurds,” he said, as he called the Turkey offensive a “bad idea”.

Meanwhile, Turkish forces intensified their strikes on northeast Syria on Friday, with Erdogan saying Ankara “will not stop … no matter what anyone says”. 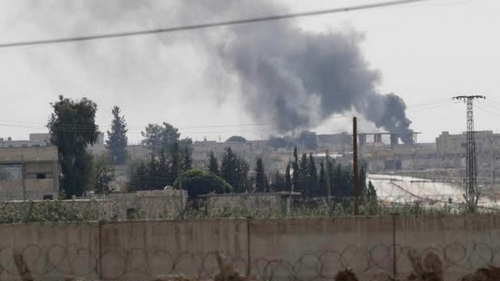 Smoke rises in the Syrian border town of Tel Abyad, as seen from Akcakale Khalil Ashawi/Reuters

ISIL also claimed responsibility in its first big attack since the Turkish offensive began. A suicide bomber hit the city of Qamishli in northeast Syria.

The Turkish assault prompted Graham to step up his criticism on Friday, tweeting: “We are witnessing ethnic cleansing in Syria by Turkey, the destruction of a reliable ally in the Kurds, and the reemergence of ISIS.”

It remains unclear what specific Turkish actions would tip the balance and push the Trump administration to respond with the conditional sanctions it announced on Friday. Esper and Army General Mark Milley admitted that despite their calls, there was no sense that Turkey would stop its assault on northeast Syria.

Tim Constantine, a conservative talk show host in Washington, DC, said Trump’s “seemingly inconsistent” positions on the Kurdish issue might have put the president “into a tight corner… that if he reversed himself or does nothing he will continue to have criticism against him”.

Constantine told Al Jazeera that he believes Democrats would attack Trump no matter which decision he made, admitting nonetheless: “The perception that Kurdish militias are being abandoned does not play well in the minds of the American public.”

Indonesia fires forces schools and airport to close in Sumatra